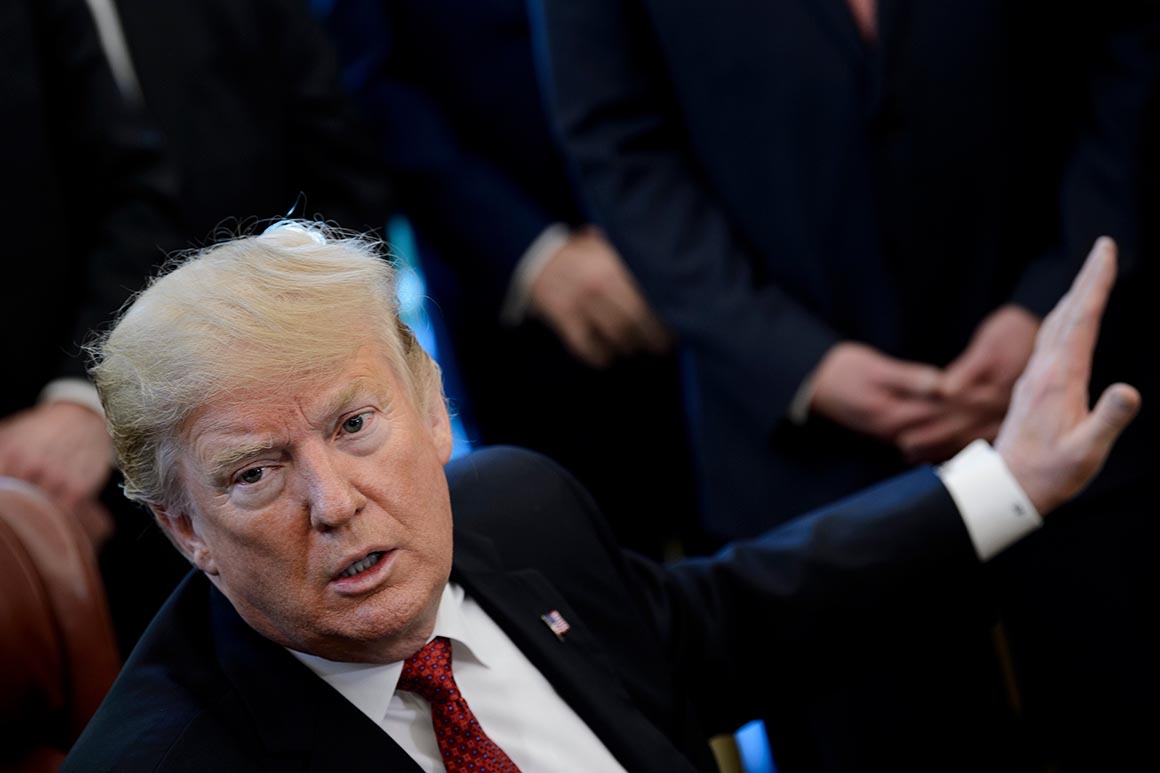 Inside the White House, the Trump team is increasingly aware that the president is trapped.

Facing a Republican Party unwilling to back another government shutdown or a national emergency declaration to build his border wall, President Donald Trump is in an unfamiliar position, according to multiple White House officials and lawmakers: prepared, potentially, to accept a compromise foisted on him by Congress.

Only a few days ago, Trump called a committee tasked with hammering out a border security deal “a waste of time.”

But he seemed warm to the idea of a bipartisan deal on Thursday after he met with Senate Appropriations Chairman Richard Shelby (R-Ala.). Shelby later briefed Senate Republicans on their meeting at a party lunch, which left them hopeful the president was willing to support something that gives him more money for fencing — even if it wasn’t the $5.7 billion he’s been seeking, said one attendee.

“He’ll consider any kind of reasonable proposition … there’s a general openness,” said Sen. Thom Tillis of North Carolina, a vulnerable GOP senator who stuck by Trump amid the politically debilitating 35-day shutdown. “He’s obviously going to fulfill his campaign promise and there’s got to be some earnest progress. It’s not like he’s going to acquiesce. But I do believe he’s showing good faith.”

“They intentionally have not set a firm number,” said Sen. Shelley Moore Capito (R-W.Va.), a conference committee member. “And I think that’s to show their willingness to negotiate, so that’s good.”

Though the White House has worked to prepare an emergency declaration invoking the president’s sweeping executive powers, several West Wing aides have warned that invoking it would alienate some conservatives who have otherwise been loyal to the White House. Lawmakers and activists on the right have been critical allies of the president on judicial nominations and have stressed that an emergency declaration could set a precedent for a future Democratic president to take far-reaching action on climate change or gun violence.

Trump has stopped musing as much about a national emergency, both publicly and privately. Asked if he’d been given marching orders or an ultimatum on a unilateral move by the president, Shelby said that didn’t happen.

“He didn’t say that. It was a very positive meeting,” said a beaming Shelby on Thursday. “He’s somewhat open, flexible.”

Another close ally, Sen. Lindsey Graham (R-S.C.), was scheduled to meet with the president on Thursday. He said the president appears to be giving negotiators the space they need to make a deal: “So far, so good.”

Republicans have warned the White House against testing the president’s emergency authority.

Utah GOP Sen. Mike Lee, who was once interviewed by Trump for a Supreme Court vacancy, approached acting White House chief of staff Mick Mulvaney in late December with his concerns about the use of emergency executive powers to fund a border wall project, according to two sources familiar with the exchange.

“Lee said, ‘I’m really worried about this. Have you run it by the lawyers at DOJ?’” said a person familiar with the conversation.

Prominent conservative publications from National Review to the Wall Street Journal editorial board have also opposed the move, the latter warning it would “set a bad precedent that conservatives who believe in the separation of powers could live to regret.”

Trump also might lose a vote in the Senate if he followed through with an emergency declaration. Just four Republicans would have to oppose him for a resolution of disapproval to be passed — an embarrassing outcome that would force him to issue his first veto.

“I wish both of them would find a way to declare victory on each side,” said Sen. Johnny Isakson (R-Ga.). “I’m tired of talking about all of that stuff … no shutdown, that’s my position.”

Meanwhile, both the White House and Senate Majority Leader Mitch McConnell have signaled that they are opposed to signing another short-term spending bill to allow negotiations to stretch past next Friday. And due to new House rules adopted by Democrats that require a three-day review of major legislation, it’s officially crunch time for Congress.

“We really have until, basically, Sunday to file the papers. So they’re going to have to in the next 24-48 hours agree, if there’s going to be a deal,” said Sen. John Thune (R-S.D.), the party whip. “I hate to raise expectations, but there’s growing optimism that there may be something there.”

That makes it all the more likely that Trump will be forced to choose between two unpalatable options: a bipartisan deal served up by lawmakers, or executive action that falls short of an emergency declaration. A more modest executive order has been under review by the White House counsel’s office for weeks, which Mulvaney has termed “legal executive authority.” Both choices are likely to provide far less money than what the president has been demanding for a border wall.

Mulvaney on Wednesday indicated that if Trump is unsatisfied with the deal reached in Congress, the president will take executive action — but avoided saying that he would declare a national emergency.

“If Congress won’t participate and won’t go along, we’ll figure out a way to do it with executive authority,” he told Fox News’ Sean Hannity.

Privately, Mulvaney and other senior officials, including White House policy adviser Jared Kushner, have been warning Trump about the drawbacks of taking executive action or employing emergency powers. The president’s chief of staff has described an emergency declaration as something he hopes to avoid due to expected legal backlash, according to six people familiar with his thinking.

Congressional Democrats have already threatened to challenge the administration in court if Trump decides to invoke executive authority, and although the White House is weighing several options that vary in their litigation risk, each would likely be opposed by the president’s critics.

Mulvaney pushed back on the notion that he has tried to warn Trump off from declaring a national emergency. “I’ve never said that to anyone in my life,” he said in an interview with POLITICO Wednesday.

And while Mulvaney, Shelby and Graham are all influential, Trump’s about-face in December on a spending bill that provoked the five-week shutdown underscored that his opinions are always subject to change.

So even as Democrats were feeling good on Thursday about avoiding a shutdown, they weren’t counting anything out just yet.

“I can’t predict what the president is going to do from tweet to tweet,” said Sen. Patrick Leahy (D-Vt.).

Source: https://www.politico.com/story/2019/02/07/white-house-trump-shutdown-deal-1157829
Droolin’ Dog sniffed out this story and shared it with you.
The Article Was Written/Published By: Gabby Orr