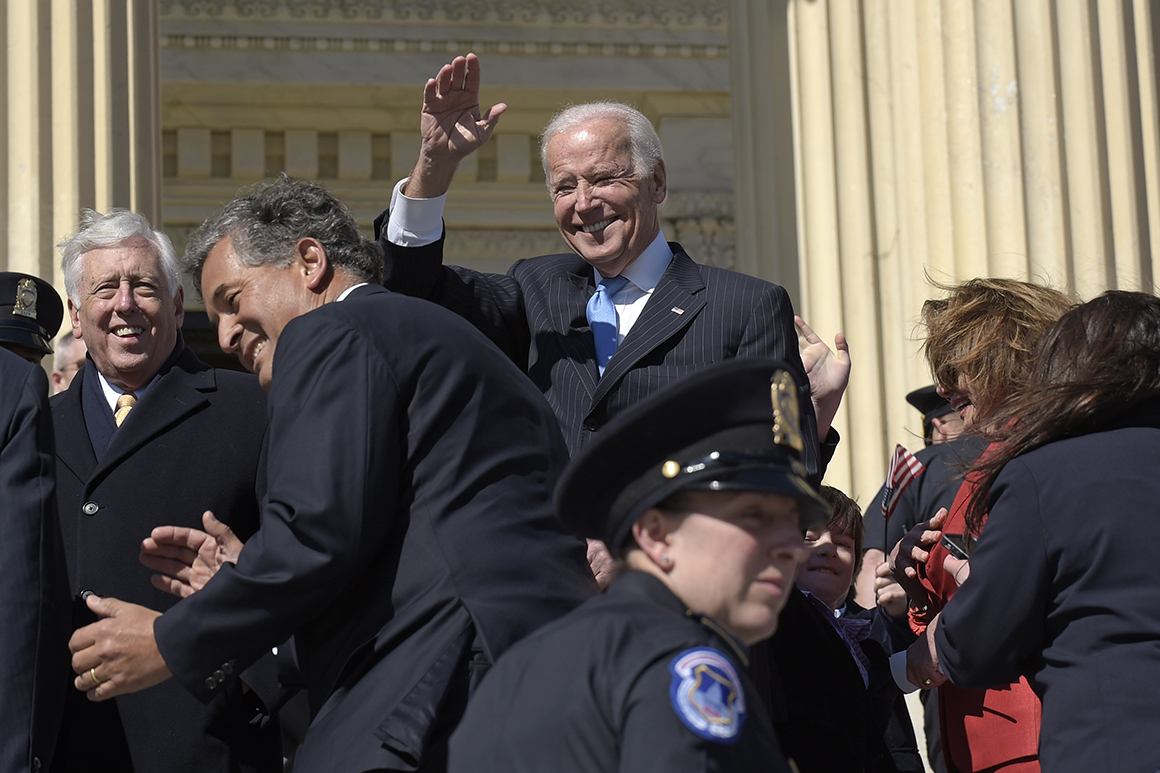 Joe Biden is working one of his most important constituencies as he closes in on a decision about running for president: Capitol Hill Democrats.

In recent weeks, the former vice president and longtime Democratic senator has spoken with former congressional colleagues about how he sees his chances in 2020, his timing for entering the race, and what it would take for him to compete in a crowded Democratic primary.

Biden has an established fan base among Democratic lawmakers, particularly in the Senate, where he served for 36 years. The outreach indicates that Biden is looking to lock down establishment support on the front end of a campaign to give him an edge in a splintered field.

On Sunday, Biden spoke by phone with Sen. Dianne Feinstein (D-Calif.), who has said publicly she’d back him if he decides to run. Biden signaled that he was sketching out both a campaign apparatus and spoke with urgency about the race, Feinstein said in an interview.

“For years, I have encouraged him to run and I’ve been very frank and candid,” said Alabama Sen. Doug Jones.

“He just has a broader swath of support across all manner of the electorate than just anybody out there,” Jones added. “Joe’s stature in the political world in America is such that he really doesn’t [need to do] the arm-twisting for support that he might have needed 20 years ago.”

Biden also spoke recently to Sen. Bob Casey, a fellow Scranton, Pa., native, according to a person briefed on the call.

Though Biden gradually grew more liberal over the years as he kept pace with the party, Democrats perceive him as having a clear, center-left lane to mount a presidential run. Others, like Minnesota Sen. Amy Klobuchar and Montana Gov. Steve Bullock could also compete in that space, but Biden starts off with an edge, Democrats said. Sen. Sherrod Brown of Ohio could also appeal to working-class voters whom Biden would likely target.

Biden has spoken with at least five senators this year about running. And the former vice president has been in regular contact with House Majority Whip Jim Clyburn, an influential figure in the key early-voting state of South Carolina, according to multiple members.

Speaker Nancy Pelosi (D-Calif.) said she talks to Biden about a multitude of topics and described him as “my friend for many years.” But Pelosi, the de facto leader of the Democratic Party until the voters choose a nominee, declined to endorse him or any other potential candidate during an interview Wednesday.

The outcome of the Democratic primary is “going to be a question of who connects,” Pelosi said, noting she “rarely endorses” in presidential campaigns. “They’re all fabulous, I could make a case for any one of them.”

Yet plenty of Democrats think Biden is the one who can connect with the widest swath of Democratic voters.

“Probably the most well-known, popular Democrat,” said Sen. Ben Cardin of Maryland. “I don’t [know] if anyone is more qualified or has a better understanding of the role of the president than Joe Biden.”

Delaware Sen. Chris Coons met privately with Biden in late January and said the 76-year-old Biden is “clear-eyed” about his advantages in the race — his extensive experience, name recognition and broad appeal — as well as “how demanding and difficult a presidential campaign is, having been through two himself.” 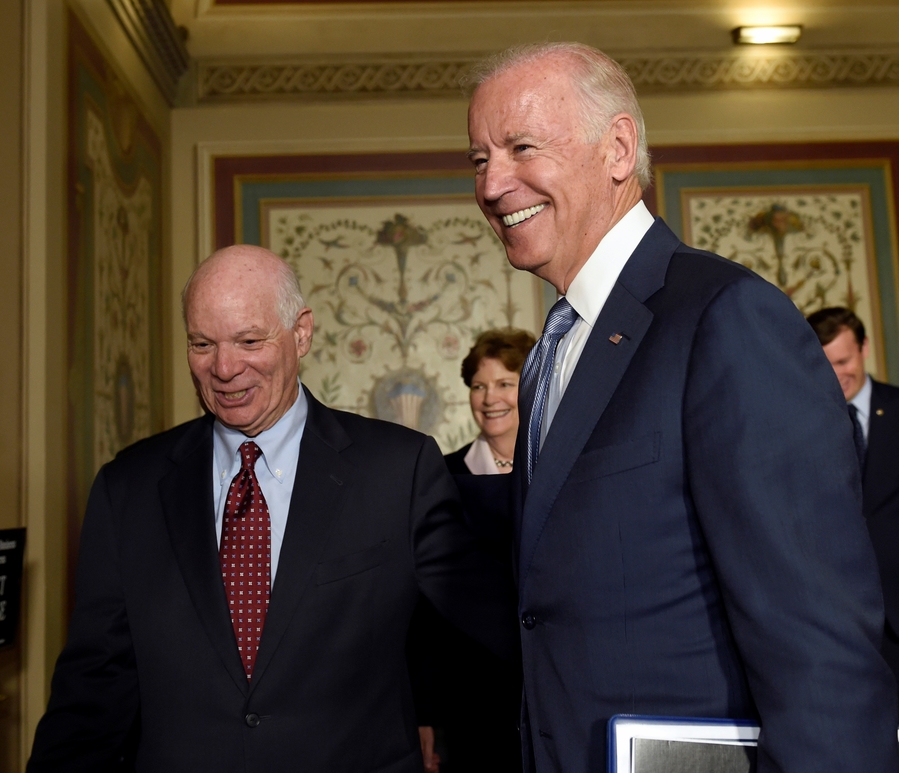 Feinstein, Coons and Sen. Tom Carper of Delaware are openly backing Biden, even though he hasn’t announced yet, and Jones said he’d “probably” join them. Those are the earliest hints of endorsements by senators in the primary beyond Sen. Robert Menendez (D-N.J.) endorsing Booker.

“I wouldn’t rule it out,” said Senate Minority Whip Dick Durbin of Illinois. “Every month or so, I get a phone call from him. He speaks in a very general way about weighing the options.”

Most of Biden’s biggest admirers in Congress speak carefully about the famously indecisive politician, praising him effusively without leaning on him too heavily to get in.

Clyburn has to be cognizant of the two Congressional Black Caucus members, Sens. Kamala Harris and Cory Booker, also vying for the nomination. He said in an interview he wouldn’t endorse a specific candidate but has plans to talk with Biden this week.

“I haven’t spoken to him directly, I’ve spoken to some close to him. And I think that he has a deep outreach,” added Rep. Gregory Meeks of New York, another senior member of the CBC.

Many Democrats view Biden as having major advantages as a potential candidate — a wealth of executive and legislative experience that other hopefuls could not match.

“There’s clearly a lane for him. He’s one of the most beloved figures in the party, one of the best known, one of the most popular, with a lot of friends here,” said Sen. Chris Murphy (D-Conn.), who is neutral in the race.

Not everyone on Capitol Hill is so effusive, however.

“People think he could recapture lost territory from the 2016 election,” said Rep. Gerry Connolly of Virginia, who worked for Biden for a decade on the Senate Foreign Relations Committee, noting the “stature and affection” he has in the party. “The problem is, he did run twice before and both campaigns were less than stellar.”

With a dozen or more viable candidates likely to end up running, including perhaps half a dozen or more from the Senate, Biden should feel some urgency to make a decision, said Sen. Joe Manchin of West Virginia.

“If I was Joe Biden, had a desire, this will probably be the most opportune time with so many people jumping in,” Manchin said.

As vice president and as a senator, Biden served with all but a handful of Senate Democrats currently in office. Coons described Biden’s backing in the Democratic Caucus and the party as “very strong.” Biden pays attention to the details in the caucus: When Montana Sen. Jon Tester won his uncontested primary last year, Biden quickly called to congratulate him.

And Biden would be a safe choice for some Democrats to avoid antagonizing Sens. Booker, Harris, Elizabeth Warren of Massachusetts, Kirsten Gillibrand of New York and other potential candidates.

At the same time, Democratic lawmakers are aware of the knocks on Biden. He’d be one of the oldest candidates and would face scrutiny over everything from the Anita Hill hearings to deals he cut with Mitch McConnell that liberals hated. His folksy and plainspoken style is an asset, but his gaffes can be weaponized.

Some Democrats are eager to usher in a new generation of leaders. One Democratic senator said Harris or Booker would be a better ambassador for the party against President Donald Trump than Biden, insisting on anonymity so as not to offend the vice president. Separately, a spokesman for Biden declined to comment for this story.

“Of all the people that have expressed interest in running, if Trump runs for reelection I think that Joe Biden may well be the best shot at winning. Not everyone feels that way,” countered Carper. “Folks are realizing he’ll be very strong against Trump.”

Scattered polls show Biden leading in the Democratic primary and suggest he is in the strongest position to take on Trump in a general election. Trump’s assessment this week of Biden as “dumb” struck many Democrats as betraying the president’s fear of Biden as a general election opponent.

“I think that comment is directly related to the very high poll numbers that Joe Biden continues to have in Iowa and other early primary states,” said Rep. Katherine Clark (D-Mass.).

Holly Otterbein contributed to this report.

Source: https://www.politico.com/story/2019/02/07/biden-2020-democrats-congress-1154192
Droolin’ Dog sniffed out this story and shared it with you.
The Article Was Written/Published By: