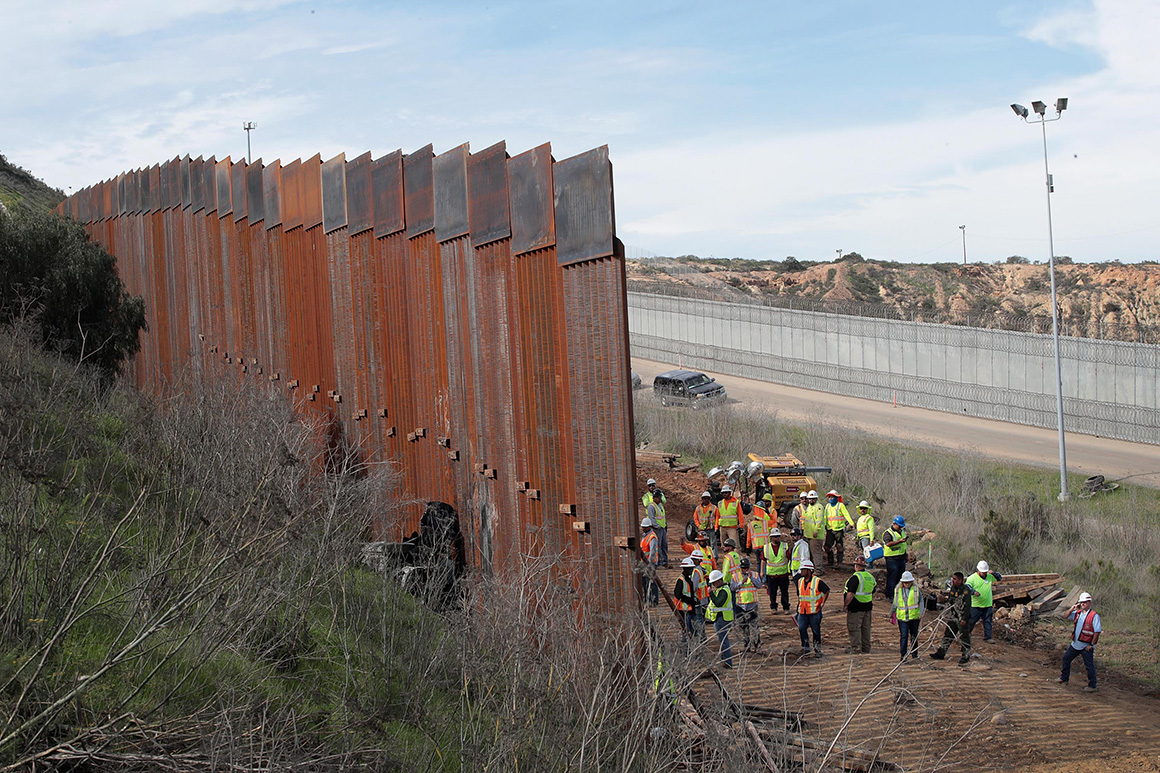 Voters have little appetite for another government shutdown if Congress does not approve money to build President Donald Trump’s proposed wall along the U.S.-Mexico border, according to a new POLITICO/Morning Consult.

But Trump’s apparent fallback position — declaring a “national emergency” to divert money to the project — is also unpopular, leaving the embattled president again stuck between a base that wants him to build the wall at all costs, and the majority that wants him to fund the government and move on.

The POLITICO/Morning Consult poll was conducted Jan. 25-27, after Trump announced an end to the more-than-monthlong shutdown that began late last year. A large majority of voters, 72 percent, support the agreement to reopen the government, the poll shows, while only 15 percent oppose it.

But after that, things get dicey for Trump and the GOP. Only 31 percent of voters support shutting the government down again to force Congress to appropriate money for the wall, while nearly twice that many, 58 percent, oppose another shutdown. If the government does shut down again, a combined 54 percent would blame Trump and congressional Republicans, while just 33 percent would blame Democrats in Congress.

Trump has suggested that he could declare a “national emergency” to avert a shutdown but still build the wall — but that, too, is unpopular. A narrow, 51 percent majority opposes declaring an emergency, which is supported by 38 percent.

Throughout the shutdown fight, Trump has tried to sell the public on the necessity of a border wall. But POLITICO/Morning Consult polling over the past month shows little, if any, movement on many of the key questions.

Similarly, the percentage of voters who support the construction of a border wall, 45 percent, is essentially unchanged. Slightly more voters, 47 percent, oppose building a wall.

Trump’s overall approval rating in the new POLITICO/Morning Consult poll is 40 percent, unchanged from last week, before the shutdown’s end. The percentage of voters who disapprove ticked down slightly, to 55 percent this week from 57 percent last week.

While Trump’s approval rating remains low, his decision to end the shutdown without securing border-wall funding does not appear to have hurt him among Republican voters, said Tyler Sinclair, Morning Consult’s vice president.

“Despite being unhappy with how the shutdown ended, the GOP base remains resolute in its support for President Trump,” Sinclair said. “Trump’s standing among Republicans has remained strong, with 81 percent approving and 16 percent disapproving of him, unchanged from last week.”

A combined 55 percent of voters also blame Trump and Republicans in Congress more for the shutdown, more than the 34 percent who blame Democrats. But more voters, 42 percent, say they trust Trump and the GOP more when it comes to handling border security than the 36 percent who trust Democrats in Congress.

The POLITICO/Morning Consult poll was conducted Jan. 25-27, surveying 1,997 registered voters. The margin of sampling error is plus or minus 2 percentage points.

Morning Consult is a nonpartisan media and technology company that provides data-driven research and insights on politics, policy and business strategy.

Source: https://www.politico.com/story/2019/01/30/voters-oppose-another-shutdown-emergency-1135962
Droolin’ Dog sniffed out this story and shared it with you.
The Article Was Written/Published By: SShepard@politico.com (Steven Shepard)