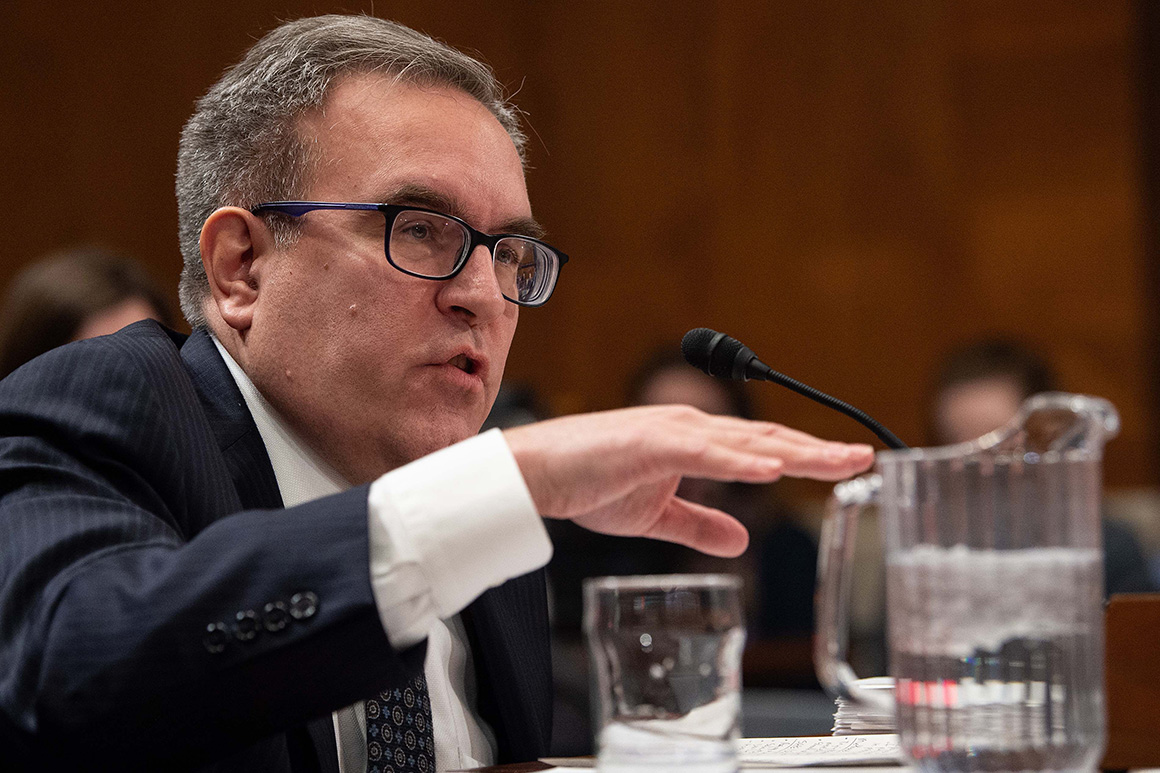 POLITICO reported Monday that Wheeler has signed off on a still-unpublished decision not to regulate the chemicals under the Safe Drinking Water Act. The chemicals, known as PFOA and PFOS, are linked to dangerous health effects, including kidney and testicular cancer, and have been found in millions of Americans’ drinking water after being used for decades in products such as Teflon and military firefighting foam.

“I’m concerned about it,” said Sen. Shelley Moore Capito (R-W.Va.), whose state has had two major contamination cases tied to the chemicals. “I’m concerned about what he thinks the reasoning is for how we’re going to get to a safer water standard if that’s not the direction they go. I think I need a fuller explanation from him.”

Capito, who is facing reelection in 2020, will be a crucial Republican vote when the closely divided Senate Environment and Public Works Committee votes on Wheeler’s nomination. She said she had a telephone call scheduled with Wheeler later Tuesday to discuss the water issue.

The committee has 11 Republicans and 10 Democrats, meaning one Republican defection could prevent the nomination from advancing.

In the House, some lawmakers are already calling for Congress to step in and force EPA to set a drinking water limit if the Trump administration does not act.

“If the EPA refuses to do its job, Congress must intercede,” said Rep. Brian Fitzpatrick (R-Pa.), who co-chairs the bipartisan congressional task force on the chemicals.

Rep. Fred Upton (R-Mich.), whose district uncovered a significant contamination from the chemicals this summer, told POLITICO that “doing nothing is not acceptable.” He added, “We’ll have ample opportunity to grill EPA.”

The drinking water decision is included in a chemical management plan that EPA sent to the White House for review in December, as POLITICO reported based on sources familiar with the matter. Wheeler told lawmakers the plan was poised for release this month before the partial government shutdown delayed it.

EPA water chief David Ross issued a statement Tuesday stressing that the plan has not received final sign off from the White House and that “any information that speculates what is included in the plan is premature.” However, he did not dispute the substance of POLITICO’s report.

“The agency is committed to following the Safe Drinking Water Act process for evaluating new drinking water standards, which is just one of the many components of the draft plan that is currently undergoing interagency review,” Ross said.

Sen. Tom Carper (D-Del.), the top Democrat on the environment committee, said he thought Wheeler could still be pressured to change the agency’s decision on a drinking water standard.

“I don’t think the last part of the play has been written on that,” Carper told reporters. “He’s going to hear that from a lot of people — Democrats and Republicans. There’s a lot of concern.”

Carper said the issue was important to Republicans, many of whom are dealing with significant drinking water contamination issues in their states.

“They care about it as much as we do,” Carper said. “It’s an important issue [to Wheeler’s confirmation]. I think there’s a growing realization that that’s the case.”

Dourson, a toxicologist with a reputation for minimizing chemicals’ risks, had led a panel that in 2002 recommended a safety threshold to the state of West Virginia that was 150 times higher than chemical company DuPont’s own internal limit for its employees. It was also thousands of times higher than the standard EPA later endorsed in 2016.

One senator who could face increased political pressure over the chemicals is Colorado Republican Cory Gardner, who is up for reelection in 2020 and whose state has its own contamination problems. He told POLITICO he expected there would be a federal role in regulating the chemicals, but he wanted to see the results of a health study included in the fiscal 2018 National Defense Authorization Act.

“I think it’s very important that we get as much information as we can and then act appropriately,” he said.

Sen. Joe Manchin (D-W.Va.), the only Democrat still in the Senate who backed Wheeler’s nomination as deputy administrator last year, told POLITICO the revelations concerned him and vowed to demand answers.

“I think it just increases the need for Congress to act,” Kildee told POLITICO.

Source: https://www.politico.com/story/2019/01/29/epa-chemical-decision-republicans-1129824
Droolin’ Dog sniffed out this story and shared it with you.
The Article Was Written/Published By: aadragna@politico.com (Anthony Adragna)