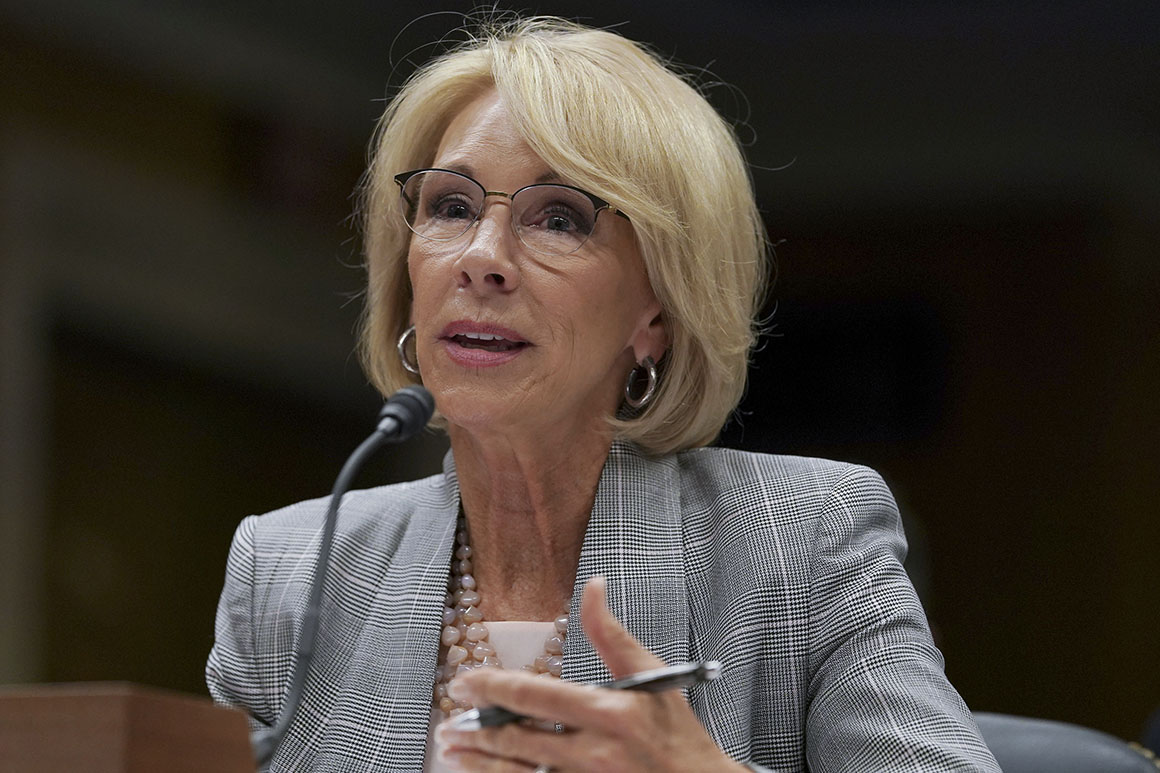 Education Secretary Betsy DeVos’ proposal to change rules for how schools handle sexual assault allegations has turned the federal site for collecting public comments into a cauldron of anger and obscenity.

DeVos, one of President Donald Trump’s few remaining original cabinet secretaries, has not become embroiled in any administration scandals during her two years running the Education Department, but she remains enemy No. 1 for many teachers and activists. The comments reflect not only the divisiveness and emotion surrounding assault investigations but how anything DeVos touches can spark hostility.

As of Friday, there were nearly 72,000 comments on the Education Department’s proposed rule. The proposal is controversial, viewed by critics as DeVos doing Trump’s bidding to protect sexual harassers, pointing to such accusations against the president. The comments are peppered with references to Supreme Court Justice Brett Kavanaugh, whose nomination was nearly tanked by sexual assault allegations.

The administration has touted its plan for Title IX as a historic move that will for the first time create formal regulations — through a notice-and-comment process — for schools responding to sexual harassment claims. DeVos has said her focus is on “ensuring that every student can learn in a safe and nurturing environment.”

Many comments on the Title IX regulation are from survivors of sexual assault, detailing their personal experiences and explaining why they believe DeVos’ proposal on Title IX would make it more difficult for others like them to seek justice.

“In particular, I am concerned about the rule saying that survivors must talk to specific employees and if they do not go to the certain employees about what they went through, then the school does not have to take action on the issue,” wrote one commenter, who said she is a student survivor. “If this is enacted then it can be very difficult for survivors to get the help and justice that they deserve. Being able to talk to someone that one is comfortable with is very important, and by adding these unnecessary obstacles it makes it very difficult for victims to receive the help they need.”

Some past Education Department proposals — such as the Obama administration’s “gainful employment” rule, which cut off federal aid for career colleges whose graduates had high debt compared to their income — also generated thousands of comments.

But the personal animus toward the Title IX proposal makes it stand out.

“We don’t live in normal times so it makes perfect sense that this is not normal,” said Barmak Nassirian, director of federal relations and policy analysis at the American Association of State Colleges and Universities. He said historically “you were looking at comments that were at most in the dozens.”

“The Title IX stuff transcends all that,” he said. “It’s obviously one of those issues that people have very personal feelings about, and add to that it’s the Trump administration.”

Many commenters are taking the opportunity to rage at the Trump administration more broadly.

“I am so very angry at this administrations hypocrisy!” one individual wrote. “So far, ‘the draining of the swamp’ has only been done to make room for more of the bottom feeders that are acceptable to ‘person #1’ and his cabinet appointees.”

“Betsy Devos seems intent on supporting Trumps ideas of womens [sic] place in society: we are to be harassed, molested, and abused, all without reasonable protections from the law,” wrote another.

More than one mentions Russia in connection with the proposed rules. As in: “If you think the American people don’t fully recognize that this is sanctioned sabotage by Russia and an intentional attack on the American educational system … you are crazy.”

But many go after DeVos directly. They focus on her wealth and lack of experience in education. One even mentions her security detail, which provides around-the-clock security for the Education secretary.

“If you are not concerned about victims, why not put yourself on equal footing of students by dismissing all your security detail?” asked the writer.

The proposal was posted for comment in December and the deadline is Wednesday.

Under the Administrative Procedures Act, the Education Department must review every comment on the proposal and respond to those that warrant a reply. Given the volume of comments, the department will have its hands full.

The Education Department did not respond to a request for comment on the angry posts.

However, DeVos has in the past called for more civility online.

“It’s easy to be nasty hiding behind screens and Twitter handles,” DeVos said last year. “It’s not so easy when we are face to face. When we are, we more quickly recognize that behind each strongly held idea are heartbeats, emotions, experiences … in other words, a real person.”

Source: https://www.politico.com/story/2019/01/28/betsy-devos-assault-title-ix-changes-1128597
Droolin’ Dog sniffed out this story and shared it with you.
The Article Was Written/Published By: bwermund@politico.com (Benjamin Wermund)