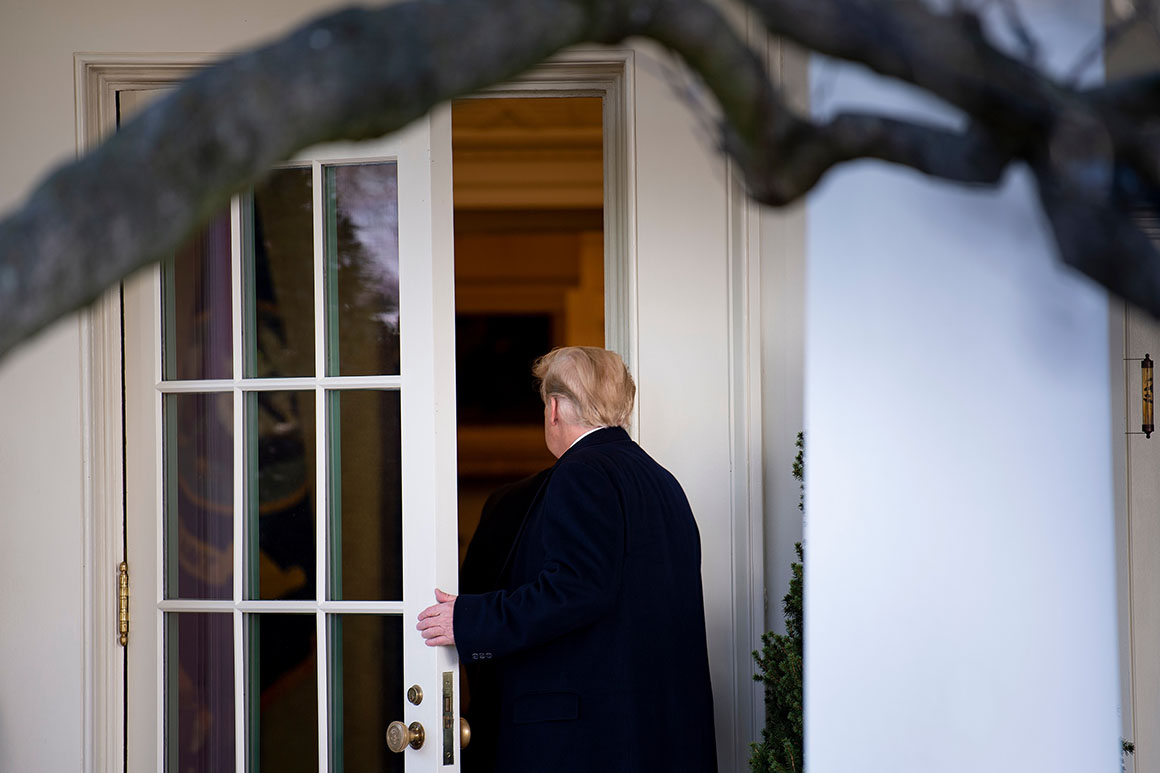 Before President Donald Trump finished speaking from the Rose Garden, putting a temporary end to the five-week government shutdown, a running group text between several of his former aides lit up with complaints.

“[Speaker Nancy] Pelosi ordered everything off the menu and left Trump hanging with the bill,” one Trump ally texted to the group.

“President Nancy Pelosi, she runs the country now,” said a former White House official. “We went from indefinite shutdown, to down payment, to cave — all within a span of 24 hours.”

That official said that Trump’s core supporters and former aides are “furious” and “melting down.”

Bewildered by his decision to accept a deal without funding for a wall on the southern border — not even the “down payment” the White House had requested a day earlier — some of his most loyal supporters fretted that Trump was in danger of losing his fervent base that has fueled his presidency. It didn’t help that special counsel Robert Mueller had just released more details about the Trump campaign’s alleged attempts to backchannel with WikiLeaks during the election.

It all left Trump staring at a tough road ahead. Having staked his nascent 2020 reelection messaging to the wall fight, Trump now can’t claim victory as Democrats start entering the field. After stumbling in his first bout with Pelosi, Trump must now face an invigorated Democratic-led House keen to investigate the White House. And following Mueller’s reveal of more evidence that Trump’s 2016 team tried to furtively gather intel about hacked Democratic emails, Trump will have to fend off increasing calls for impeachment.

Trump’s allies in Congress and some conservative immigration advocates did come to the president’s defense on Friday, arguing that he was taking the high road and calling Democrats’ bluff on a vow to negotiate on border security once the government reopened.

“I wish people would read or listen to my words on the Border Wall. This was in no way a concession. It was taking care of millions of people who were getting badly hurt by the Shutdown with the understanding that in 21 days, if no deal is done, it’s off to the races!” he wrote.

But the moment still seemed deflating for a president who prides himself on winning so much, “you’re going to get tired of winning.”

During the month-long shutdown, Trump’s approval ratings dropped to record lows, his much-touted economy lost steam because of the shutdown and conservative immigration activists rolled their eyes over the his wall fixation.

And the wall is the one issue that Trump’s allies say he can’t lose on. Just three weeks ago, GOP Sen. Lindsey Graham predicted doom if Trump didn’t get wall funding.

“He’s not going to sign a bill that doesn’t have money for the wall. … If he gives in now, that’s the end of 2019 in terms of him being an effective president,” Graham said on FOX News. “That’s probably the end of his presidency.”

The agreement Trump announced on Friday funds the government until Feb. 15, giving congressional negotiators three weeks to work out a larger immigration deal. Democratic leaders, including Pelosi and Senate Minority Leader Chuck Schumer, expressed optimism that such an agreement could be reached. But others, including numerous Republicans, were less confident.

“There isn’t any insurance policy on that,” said Sen. Kevin Cramer (R-N.D.)

Trump made the decision to reopen the government Friday after the Federal Aviation Administration grounded flights bound to New York’s LaGuardia Airport because air traffic control staff, who were not being paid, called in sick.

“FAA shutting airports is a losing card,” said a former Trump adviser who remains close to the White House. “He doesn’t care about federal workers. But pissing off travelers — watch out.”

It’s not the first time Trump has lost a legislative battle in his two years as president. He failed to get Republicans to unite over a plan to repeal Obamacare in 2017. And he rebuffed a bipartisan immigration reform package in 2018. But Friday’s retreat was the most high-profile to date.

“I’m not sure allies are going along with it, more just letting it happen. It’s like watching a house completely engulfed in flames; there’s nothing you can do except watch,” a former campaign aide told POLITICO when asked about the reaction from hard-line immigration groups like the Federation for American Immigration Reform, whose president Dan Stein appeared to tepidly endorse Trump’s latest strategy.

In a statement, Stein said Trump “acted in good faith” to reopen parts of the federal government that have been shuttered for more than a month. “The ball is now in Nancy Pelosi and Chuck Schumer’s court to demonstrate theirs.”

Three former Trump aides disagreed with Stein’s assessment, claiming the president raised a white flag on Friday and surrendered the already-limited leverage he had left. All three expressed dismay at the president’s strategy over the past 72 hours — from him submitting to Pelosi’s request to delay the State of the Union until the government reopened to endorsing a wall-less spending bill while congressional Democrats and Republicans hash things out.

“He allowed 35 days of chaos and hurt all for nothing,” said the second former White House official. “I’m so glad people will start being paid, but this could have been done in December.”

The White House allies said their chief concern going forward is a situation in which Trump backpedals again if a deal isn’t struck in the coming weeks. The White House has left a national emergency declaration on the table, suggesting the president could still invoke executive authority to secure funding for a barrier along the U.S.-Mexico border.

Attorneys in the White House counsel’s office have spent weeks reviewing the legality of such a move, parsing the various options, according to one Republican close to the White House.

“He’s going to cave again in [three] weeks,” predicted the former campaign official. “Democrats have Trump by the balls.”

Source: https://www.politico.com/story/2019/01/25/trump-government-shutdown-end-border-wall-1128564
Droolin’ Dog sniffed out this story and shared it with you.
The Article Was Written/Published By: Gabby Orr