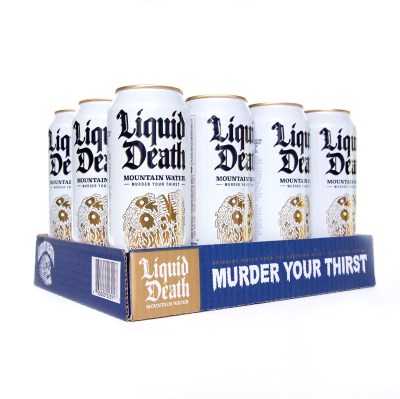 Inventive packaging is more crucial than ever when it come to launching a new brand into a world already clogged with every product imaginable. Think, for example, of the sugary energy drinks that began to appear on the scene roughly 20 years ago — Rockstar, Monster, and Red Bull — that are stuffed with so much caffeine, sugar, legal stimulants and L-Carnitine that you kind of know intuitively that they probably aren’t great for your health, even if they’re no worse than traditional sodas.

Indeed, one West Coast agency creative-turned-entrepreneur, Mike Cessario, is hoping consumers’ love of cans and brands that sound like heavy-metal musical acts can be combined to sell something else: mountain water from the Austrian Alps. The name of his company? Liquid Death.

It’s a bit of a joke, but one in which Cessario very much includes the customer. After all, if people are buying water anyway —  it was a $240 billion market as of 2017 and is expected to continue growing along with fears about contaminated water — why not put in an aluminum can, which can be recycled far more easily than a plastic bottle, and why not give it a brand that’s grimly funny?

The question now is whether people will drink it in. Liquid Death, which is backed with an undisclosed amount of seed funding from the L.A. incubator and fund Science Inc., is about to find out, too, by beginning to sell the cans directly to consumers from its website today and on Amazon.

We talked a couple of weeks ago to Cessario and Science cofounder Mike Jones to learn more about how Liquid Death came together, and how they intend to ensure it sticks around.

TC: I understand Liquid Death started a a side project on Indiegogo but didn’t really catch anyone’s attention until you posted a funny video on Facebook that may remind some of Dollar Shave Club’s earliest video.

MC: Liquid Death was this idea that we thought would be a cool thing if it existed, so we made a funny video that made it seem like it was real on the Internet to see what kind of interest came from it before we started investing money into it. AdWeek picked it up, thinking it was a neat idea. And so we spent the last year building a following online before gearing up to launch an actual product to the people, which happens [today].

TC: And Mike Jones, what was Science’s role in making that happen?

MJ: We partnered with them inside our incubator, and our fund is also an investor in the company. Our team on the incubation side is very focused on direct-to-consumer goods and products, working with aspects of CPG, strategy, growth, finance, margins, etc. So our team fell in love with brand, and as a fund, we recognized what could be a big market opportunity.

TC: Tell us about the manufacturing.

MC: Liquid Death comes 500 milliliter cans that manufactured in Austria because of a lot of things that fell together, including finding a bottler there who could make our product for us and was willing to do it. It was kind of a happy accident that we have a great producer — a contract manufacturer — in a cool place.

TC: You’re marketing this product partly to kids, joking that water is way more dangerous than energy drinks. Kids love flavors. Are there flavored waters in the works?

MC: We don’t have any planned yet. We’re just going to stick with one SKU until it makes sense for us as a brand [to expand].

TC: You’re selling directly to consumers now. What’s the plan for distribution down the road?

MC: After we get the ball rolling, we’ll be in select bars and barber shops and tattoo parlors in L.A. and Philadelphia and potentially Austin, Texas. It’s a little more of a lifestyle play for us, which is why we’re targeting bars and more adult places. After that, we’ll figure out where else it makes sense to offer Liquid Death.

TC: Mike Jones, you’ve worked with launching a number of consumer brands, including Dollar Shave Club, for example. How hard is it to get onto retailers shelves?

MJ: Retail is having challenging time right now and retailers are excited about differentiated brands that get people excited about getting into their stores. One thing that Mike and I talk about a lot is how to introduce the brand to the audience. Similar to the early days of energy drinks. his team is thinking about where are the right places for this. Last night, I was invited to a charitable fundraising event at the [Hollywood] Palladium with the Red Hot Chili Peppers and had Aquafina all night, and I was like, this is the type of environment where this brand would make sense.

TC: Is it fair to say this is a product for teens ultimately?

MC: Possibly. We don’t want to tell people what to do. The healthy food space is generally all about telling people, ‘you need to do this,’ or ‘without these minerals, you aren’t doing it right.’ We’re trying to be a healthy brand that’s not too preachy. I don’t think you need to preach to people to drink more water. I think they get it. But we are taking a jab at all these unhealthy brands that own youth marketing.

TC: How did you settle on cost, and is there a subscription component?

MC: The cans retail for $1.85 a piece for a 16.9 ounce can, which is right around the same price as other premium water brands. And yes, it can be delivered to your door via 12-packs. You save 10 percent by buying [in bulk].

Source: https://techcrunch.com/2019/01/24/a-brand-called-liquid-death-wants-to-sell-mountain-water-to-the-cool-kids/?utm_source=feedburner&utm_medium=feed&utm_campaign=Feed%3A+Techcrunch+%28TechCrunch%29
Droolin’ Dog sniffed out this story and shared it with you.
The Article Was Written/Published By: Connie Loizos