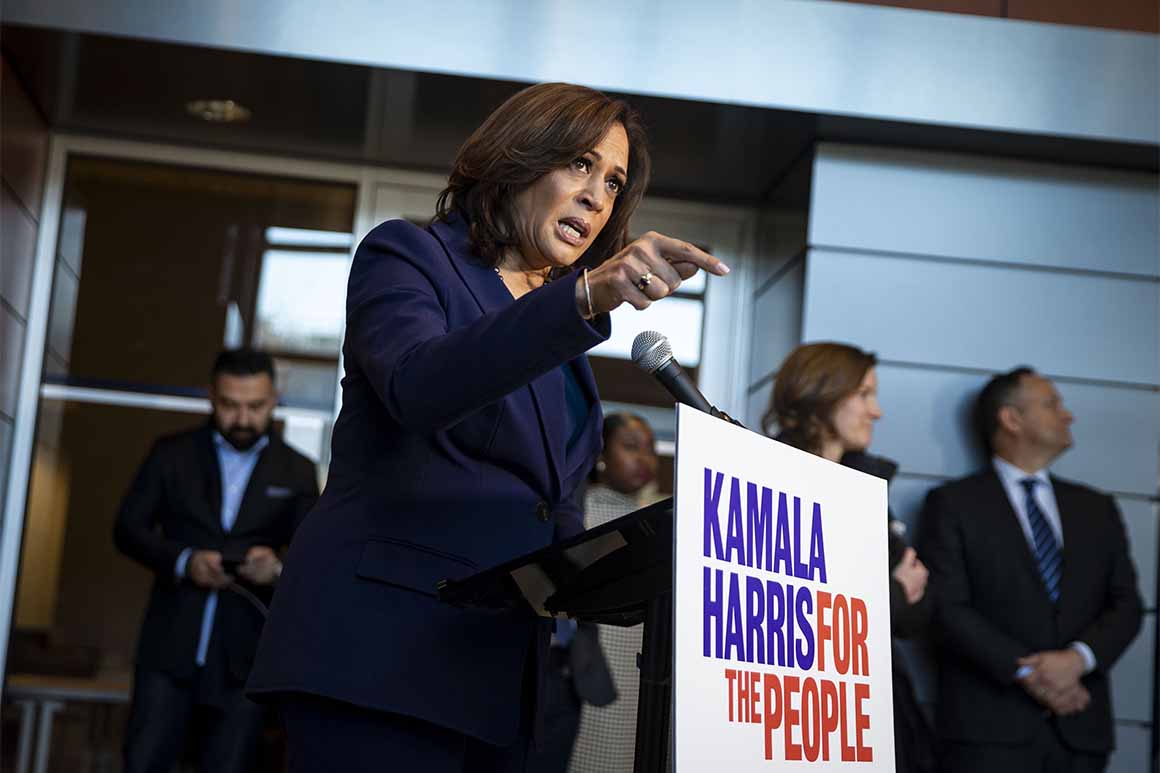 On Sunday, the Democratic senator will launch her presidential campaign here with a speech to thousands of supporters that she hopes will lay down a marker to Democratic voters — and be looked back upon as a milestone moment in her career and the 2020 campaign.

Taking a cue from Barack Obama, the Democratic senator wants to connect her personal biography with her broader reason for running. She chose Oakland as a way to tie her campaign to the place that informed her values — a diverse and progressive city once known for its militant activism that’s become a stronghold of the Trump rebellion.

Oakland is where Harris was born and spent her formative years living on the boundary between the city and Berkeley. In elementary school, she was part of a national experiment in desegregation through busing. It’s also where Harris got her professional start; and where she went to work as a prosecutor in an office that was once run by Earl Warren, who later as chief justice led a unanimous Supreme Court to help end school segregation with its decision in Brown v. Board of Education.

And Oakland is where nearly three decades ago — for the first time in her career — she introduced herself to a judge as “Kamala Harris, ‘for the people,’” a line she adopted as her presidential campaign slogan.

“Oakland is known for its toughness, pride, diversity and for being a city that represents the underdog,” Sean Clegg, a senior strategist for Harris’ campaign, told POLITICO. “She’s been in a lot of places, and she’s going to talk about other aspects of her record, but she’s going to start the campaign where it all started for her.”

Harris, who is setting up campaign offices in Oakland and Baltimore, isn’t the first candidate to draw on symbolism for their launch. Obama waded into the 2008 contest with a speech in Springfield, Illinois, his adopted state. The address tightly summarized his career arc and his campaign’s rationale against the backdrop of a statehouse where Abraham Lincoln delivered his famous “House Divided” speech in 1858 condemning slavery.

Like Obama, Harris has paid especially close attention to the details of her rollout. After announcing on Martin Luther King Jr. Day, Harris unveiled a logo paying homage to former Rep. Shirley Chisholm, whose 1972 presidential run was the first by a black woman from a major political party. Later that day, she held her first news conference on the campus of Howard University, her historically black alma mater. Her first trip this year to South Carolina came Friday – to address fellow members of the Alpha Kappa Alpha Sorority — a group of politically plugged-in women that could pay dividends in the primary.

Oakland’s history of women’s activism and black activism will form her backdrop, noted James Taylor, author of “Black Nationalism in the United States: From Malcolm X to Barack Obama.” “To launch her campaign here is tapping into all those microhistories that are abundant – from the general seamstress strikes of the 30s to the Black Power movement of the 60s,” Taylor said.

Harris’ choice of Frank Ogawa Plaza, outside City Hall, as the site of her kickoff will bring supporters to the same location chosen by Obama for his 2007 introduction to the Bay Area. For Harris, the daughter of a Jamaican father and an Indian mother, the setting is another opportunity to connect with African Americans around the country.

“She is launching from the black community base of the Bay Area. It’s to say, “I have my credentials as an African American,” Taylor added. “‘I’m not claiming Washington, D.C. I’m claiming Oakland.’”

Yet equally important is the place Oakland is not: It’s not San Francisco, the city’s politically wired neighbor across the Bay where extreme wealth and poverty are in constant conflict, and whose famously liberal streak makes it a target for ridicule. And it’s not Los Angeles, the sprawling megalopolis to the south where apathy runs high and Hollywood dreams are more often dashed than realized.

Oakland, like Harris herself, is not easily categorized. High crime rates and rampant homelessness have for years vexed local officials here. The city’s civic pride took successive hits with the departure of the Oakland Raiders and the coming move of the Golden State Warriors to San Francisco. But in a deep-blue state that exports technology and entertainment, Oakland’s economic rise has come to represent a kind of American renaissance. Its progressivism gives Harris a sharp contrast with Donald Trump.

“In the Trump era, people are looking for models of opposition and symbols of opposition to this president and his policies, and Oakland has this long history of militant opposition and activity,’’ Liam O’Donoghue, a local historian who produces the regional podcast, “East Bay Yesterday,” said in an interview. “Some people would consider it to be America’s home of militant black activism because of the history of the Black Panthers,” which made the city its headquarters in the 1970s, and whose leaders, including Bobby Seale and Elaine Brown, ran for public office.

In more recent times, Oakland has taken a role as a leading, sometimes violent, location for widespread political organizing. After the first major demonstrations on Wall Street, the city was quick to embrace the Occupy movement, which led to thousands of people in the streets and scenes of police-protester confrontations that made national headlines for weeks. The Black Lives Matter movement, fueled by police-involved shootings like that of Oscar Grant, pushed Oakland’s activists to shut down freeways nearly every night for a month in 2015, sparking violent clashes that again put the city in the spotlight.

But Oakland in recent years has taken on a different mantle, that of a tourism and culinary star in major publications, which have compared its “boho” vibe to that of Brooklyn, New York. And the city has been featured in major movies like “Black Panther,” “Blindspotting,” and “Sorry to Bother You,” making Harris’ choice a resonant location for Millennials who may not recall the fiery Panther days. But with gentrification threatening longtime residents and shifting its demographics, O’Donoghue said, “It feels like pride in Oakland history is particularly strong right now,” because residents want to preserve the authenticity derived from its raucous past.

It’s the city’s penchant for activism that has some concerned about Harris’ choice of venue. Don Perata, a Democrat who represented Oakland for years in the State Senate, called the decision “risky,” and pointed to her background as a prosecutor, district attorney of San Francisco and state attorney general as giving fodder to “the far left to come in and make accusatory remarks’’ about her record in law enforcement.

Harris doesn’t appear too worried. At a Washington fundraiser a couple years ago where she was joined by Sen. Cory Booker of New Jersey, Harris used her Oakland roots to illustrate her toughness. Addressing the room after Booker spoke, Harris said his presence reminded her of the first race she ever ran: for freshman class representative of the student council at Howard.

“And you know my opponent was tough because she was from New Jersey,” Harris said. “But I’ll tell you another thing,” she added, building suspense for a line that would bring down the house, “I was born in Oakland!”

Source: https://www.politico.com/story/2019/01/26/kamala-harris-2020-oakland-1128563
Droolin’ Dog sniffed out this story and shared it with you.
The Article Was Written/Published By: Carla Marinucci