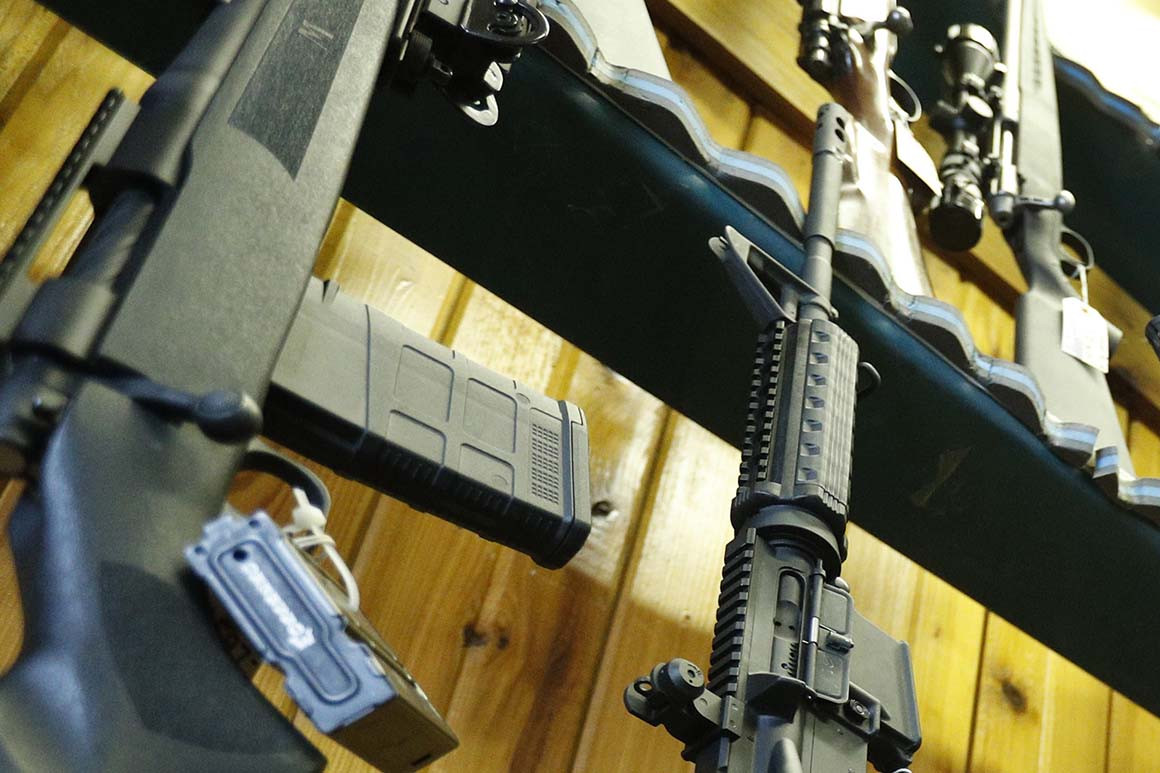 Democrats are introducing a bill that would raise the minimum age to buy assault-style weapons, the latest in a multipronged effort to address a string of recent mass shootings and stifle the gun lobby’s sway since taking back the House majority.

The bipartisan bill, expected to be introduced by Rep. Anthony Brown (D-Md.) Wednesday, would prohibit anyone younger than 21 from buying semi-automatic rifles, with exceptions for active duty military personnel and some police officers. In most states, anyone 18 or older can buy what’s known as an assault-style weapon, even though the federal purchasing age for handguns is 21.

Brown’s bill is a repeat of legislation the Maryland Democrat and others offered in the previous Congress after the mass shooting at the Marjory Stoneman Douglas High School in Parkland, Fla., left 17 students and school staffers dead. That effort failed to pass, but this time Democrats have the House majority on their side.

Brown acknowledged that creating age restrictions is far from his ideal, and he would prefer an outright ban: “I’m all about banning assault weapons,” he said in an interview. But Brown first introduced the bill in the House last year because President Donald Trump himself endorsed it in the days after the Parkland shooting.

“Where’d I get this idea from? I got it from President Trump,” Brown said.

Three Republicans have so far signed on: Reps. Brian Fitzpatrick of Pennsylvania, Brian Mast of Florida and Peter King of New York. The one other Republican who backed the effort last year, Pennsylvania Rep. Charlie Dent, has retired.

Last March, Trump told a group of lawmakers in a meeting that aired live on cable news that he supported raising the minimum age to purchase semi-automatic weapons to 21.

“It doesn’t make sense that I have to wait until I’m 21 to get a handgun, but I can get this weapon at 18,” Trump said then. The remark stunned Capitol Hill. Within weeks, however, Trump reversed his position after a high-profile meeting with the National Rifle Association.

The Raise the Age act is part of a high-profile effort by House Democrats to combat both gun violence and the NRA’s influence over Congress; the latter has effectively prevented any meaningful gun safety legislation from moving in years despite a string of high-profile massacres.

Brown hopes his bill will be among several gun control measures that get a floor vote this summer.

The first measure expected to come up for a vote on the House floor is a bill to mandate universal background checks for most gun purchases, including private transactions. Rep. Mike Thompson of California, chairman of the Democratic “gun violence prevention task force,” introduced that bill in early January shortly after Democrats took control of the chamber.

Brown said he has had only “informal conversations” with Democratic leaders about his bill but hopes it will be included in a broader Democratic effort that will likely be centered around the background checks proposal. That bill has 221 co-sponsors, including five Republicans.

So far, Brown’s bill has dozens of co-sponsors, including high-profile gun control supporters like Rep. Lucy McBath (D-Ga.), whose 17-year-old son was killed in a shooting in 2012.

The bill mirrored a measure in the Senate, co-authored by Sens. Dianne Feinstein (D-Calif.) and Jeff Flake (R-Ariz.). With Flake gone, Brown said it’s unclear which Republican may fill his spot, though he said he plans to target Senate Republicans who are up for reelection in 2020.

“I believe that there is a majority in the Senate that would view this as very reasonable to raise the age on assault weapons,” Brown said.

Across the U.S., the vast majority of states allow young people younger than 21 to purchase semi-automatic weapons, according to the Giffords Law Center.

A handful of states moved to act in 2018 after the suspect in the Parkland shooting, then 19 years old, used a semi-automatic rifle he had legally purchased in the attack. Among the states was GOP-dominated Florida, where the NRA is now suing the state over the restriction.

Brown’s home state of Maryland is among the few that already ban semi-automatic sales to people younger than 21. When he served as the state’s lieutenant governor, Brown was knee-deep in its gun control overhauls in the wake of the Newtown, Conn., shooting in 2012: He personally helped whip votes for the one of the strictest measures in the country.

For Brown, the battle for gun control has long been personal. Eleven years ago, his cousin, Cathy, was shot and killed by her estranged boyfriend.

“That’s when I decided that I really needed to step up my involvement,” Brown said.

Brown and other supporters of the bill argue that the legislation would simply bring parity to federal regulations that currently diverge when it comes to handguns versus semi-automatic weapons.

The Brown bill — like the background checks legislation — is unlikely even to be considered in the Senate, much less signed in to law by Trump. But passage by the House would still be a major win for gun safety advocates, who have tried for years to enact stricter laws only to be rebuffed constantly by Republicans and gun-rights groups.

The NRA has opposed such efforts in the past, including when Brown introduced the same proposal last year. And Brown said he’s not naive about the influence the organization still has in Congress.

“I think more and more people are viewing the NRA with more cynicism and suspicion. But let’s not kid ourselves, they continue to have a very, very strong grip on far too many Democrats,” he said.

Still, the high-profile effort by House Democrats shows just how much the political conversation around guns has shifted in recent years. Several Democrats — some of whom would have shied away from the issue in the past — piggybacked on a national effort to enact stricter gun laws led by the Parkland students last year and openly campaigned on gun safety in the election.

Fitzpatrick, one of the lead Republican co-sponsors, said he hopes several of his GOP colleagues will end up supporting this “common-sense measure.”

“By raising the age restrictions for military-style semiautomatic weapons, this bipartisan bill provides parity with handgun purchases,” Fitzpatrick said in a statement. “While continuing to support Second Amendment rights, this Congress can take meaningful action to protect our children and keep our communities safe.”

Source: https://www.politico.com/story/2019/01/23/congress-guns-legislation-purchasing-age-1119920
Droolin’ Dog sniffed out this story and shared it with you.
The Article Was Written/Published By: sferris@politico.com (Sarah Ferris)