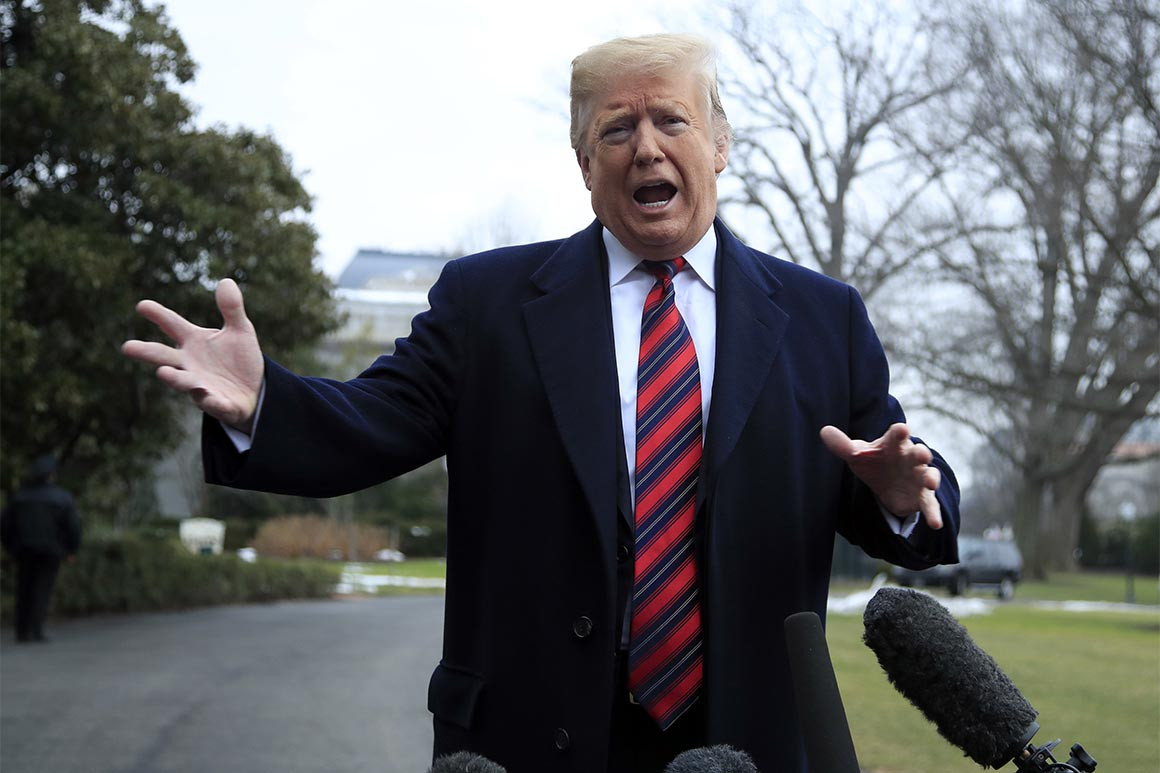 President Donald Trump is expected to propose a broad immigration compromise intended to force Democrats back to the negotiating table, an attempt to break a shutdown stalemate that entered its fifth week on Saturday.

Details of Trump’s proposal will come in remarks at 4 p.m. from the White House’s Diplomatic Reception Room. They’re likely to include increased protection for Deferred Action for Childhood Arrivals recipients and an extension of Temporary Protected Status for the refugees who hold it, though sources cautioned that the details have yet to be finalized and could change at the last minute. Democrats seem unlikely to take the deal, particularly if Trump doesn’t open the government up first before discussing the border issue.

The president declined to offer details of his plan while speaking to reporters Saturday morning. He continued to play up the threat posed by caravans of migrants from Central America — “If we had a wall, we wouldn’t have a problem” — and then, moments later, said the building of the wall on the U.S.-Mexico border is well underway.

The president’s gambit is intended to turn the tables on Democrats, casting them as the unreasonable party if they refuse to negotiate with a president who is making the first move and saying he’s willing to compromise. White House aides believe Democrats may be under increasing pressure to strike a deal given that federal workers are set to miss a second paycheck in the coming week.

“Dems were not consulted on this and have rejected similar overtures previously. It’s clearly a Republican-and-Republican negotiation,“ the aide said.

Trump’s latest attempt at a deal came together after White House senior adviser Jared Kushner reached out to Democratic senators, though there is no indication that those senators are supportive of the president’s forthcoming proposal. But Sen. Dick Durbin (D-Ill.) along with Sen. Lindsey Graham (R-S.C.) are cosponsors of the BRIDGE Act, which would protect DACA recipients from deportation for three years and grant them work authorization permits. Durbin has said he will only negotiate after the government has reopened.

Kushner, along with Vice President Mike Pence, have served as the White House’s liaisons to Capitol Hill during the shutdown, but have thus far been unable to strike a bargain on the president’s behalf — and lawmakers have increasingly demanded to hear from the president himself.

Though Trump on Friday touted his forthcoming plan as a “major announcement,“ there are reasons to doubt it will mark a turning point in the 29-day standoff.

The White House is pushing the GOP-controlled Senate to lead movement of any compromise legislation, according to an administration official. But Democrats have been resolute in their demand that Trump reopen the government before agreeing to an increase in funding for border security — a major chasm between the two parties that the president’s tentative proposal appears unlikely to solve.

The White House‘s gambit would require support from at least seven Democratic senators to pass the chamber, a heavy lift unless Senate Minority Leader Chuck Schumer (D-N.Y.) were to endorse such a move. Democrats on Friday continued to insist they would not negotiate with the president before the government reopens.

The president‘s decision to make the first move to propose a compromise marks a swift reversal from the tone he struck with a bipartisan group of lawmakers just three days ago, when he described a degenerating situation on the Southern border. He told them “we have the worst human trafficking in the history of the world“ and that drug traffickers now weld drugs into cars so that “dogs can’t even smell them.“

In the meeting, held in the White House Situation Room, Trump told the junior lawmakers that he would not budge until he got an indication from Schumer and House Speaker Nancy Pelosi that they were willing to make a deal, according to a person in the room.

He claimed his strength had grown in the polls as the shutdown had proceeded, though he declined to offer any specific numbers. Independent polling shows the opposite, and the president’s campaign team has increasingly fretted that the shutdown is kicking off his reelection effort on a sour note.

Trump also insisted he would not sign a continuing resolution to temporarily reopen the government, telling the lawmakers it would be too hard to shut down the government again after reopening it if he didn’t get the money for his wall, and that “Nancy said she’d only give me a dollar.“

Source: https://www.politico.com/story/2019/01/19/trump-government-shutdown-deal-1116049
Droolin’ Dog sniffed out this story and shared it with you.
The Article Was Written/Published By: Burgess Everett