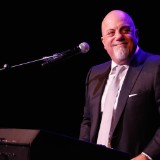 Billy Joel has announced his touring plans for 2019, hitting up eight stadiums in North America, including four ballparks he has not played in the past.

For the first time this year, the “Uptown Girl” singer will play Camden Yards in Baltimore on July 26, where he is the first artist to ever…

Source: https://www.spin.com/2019/01/billy-joel-announces-stadium-run-dates-for-2019/
Droolin’ Dog sniffed out this story and shared it with you.
The Article Was Written/Published By: Dave Brooks, Billboard