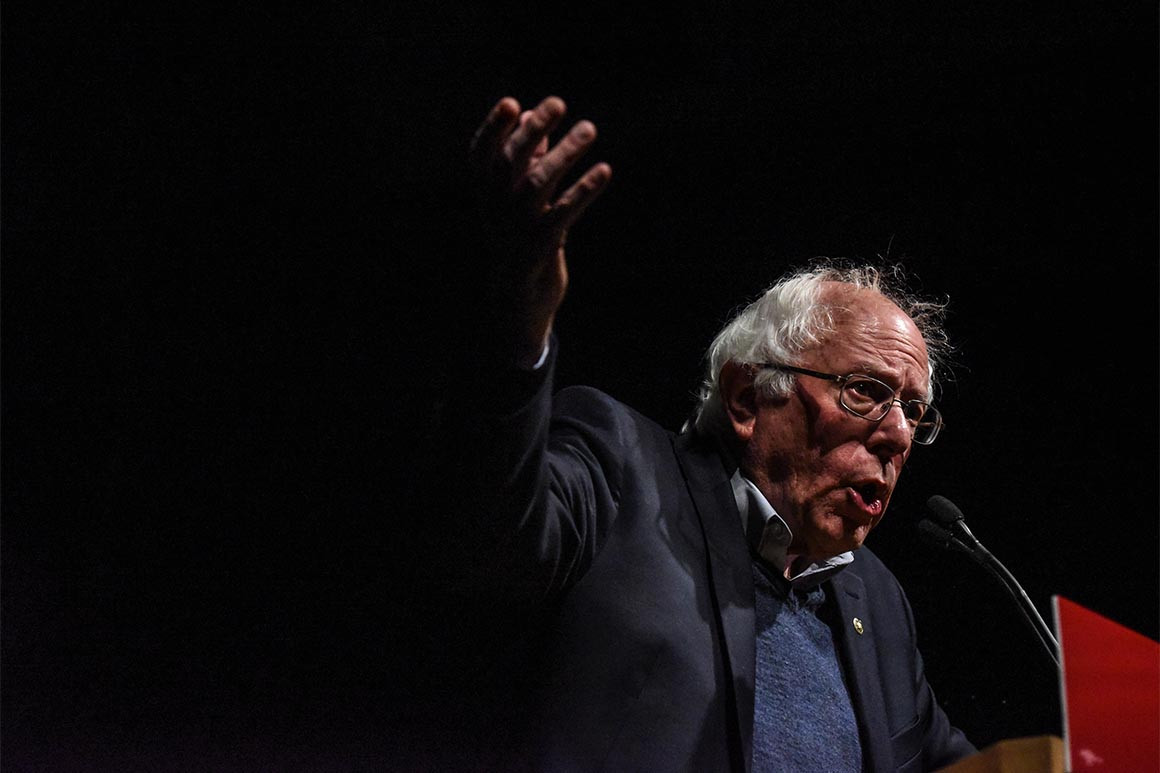 Bernie Sanders is adding firepower to his political team ahead of a potential 2020 campaign, locking down digital alumni who were key to his surprise performance in 2016 and recruiting the media production company that helped launch Alexandria Ocasio-Cortez to prominence.

The flurry of activity, detailed by four people familiar with the campaign’s thinking, is the latest sign that the Vermont senator is closing in on a decision on a second run for the White House.

Means of Production, the filmmaking cooperative that created the viral campaign video that propelled Ocasio-Cortez’s House campaign, is in talks with the Sanders team about a major role in 2020. And two people who powered Sanders’ record-breaking small-dollar fundraising operation in 2016 have agreed to join a subsequent presidential bid if it materializes, according to a Sanders campaign aide: Tim Tagaris and Robin Curran, his digital fundraising director and digital production director in 2016, respectively.

The aide said another pair that have helped Sanders build a digital media juggernaut out of his Senate office — media producer Armand Aviram and digital director Georgia Parke — are likely to be part of his 2020 team, too.

The behind-the-scenes moves underscore one of Sanders’ key strengths: He is poised to enter the Democratic primary field with a digital operation and social media army that outpaces virtually any other candidate, at least for now. For all the attention on Beto O’Rourke’s online dominance last year, only Sanders would start the campaign on the foundation of a full-fledged, grassroots presidential campaign.

The steps also suggest that Sanders has every intention of trying to reactivate the army of liberal activists he amassed two years ago, undergirded by an unapologetic Democratic socialist message backed by a state-of-the-art fundraising and digital infrastructure.

“Sen. Sanders maintains an organic and very expansive social media following that really only he has” among possible 2020 contenders, said David Duhalde, political director of Sanders-founded Our Revolution. “He has a significant advantage.”

Naomi Burton and Nick Hayes, activists in the Democratic Socialists of America who left a global public relations agency and commercial production freelancing to launch Means of Production, rocketed into the national spotlight last year when they produced the hit ad highlighting Ocasio-Cortez’s working-class roots and left-wing policies. It received 300,000 views in a day and eventually racked up nearly 4.6 million views on Twitter and YouTube.

“They’ve proven that they’re on the cutting-edge of popularizing progressive populist and democratic socialist politics in America,” said Waleed Shahid, a spokesman for Justice Democrats, the progressive political action committee that recruited Ocasio-Cortez.

Burton said the Detroit-based team would likely create “big, beautiful ads” and “drumbeat content” for Sanders if it was brought on for 2020.

“We have certainly been talking with his team,” she said, adding that if Sanders runs, “He’s the only candidate we would work for.”

Tagaris, a member of Sanders’ inner circle who was expected to be part of any 2020 campaign, is known as a trailblazer in small-dollar fundraising. Now the owner of Aisle 518 Strategies, he has been running Sanders’ email program and digital advertising. Curran, in addition to working on Sanders’ 2016 campaign, was the Democratic National Committee’s email director during the 2018 midterm cycle.

Asked about their future roles, Tagaris confirmed that, along with him and Curran, who is now vice president of digital strategy at Aisle 518 Strategies, his firm’s Hal Irish and Saron Olkaba have also pledged to be part of any 2020 Sanders campaign.

Curran’s allies said she transformed the DNC’s email program, which critics considered almost beyond repair, during her time there.

Aviram, a former producer for the millennial-focused media company NowThis News, and other Senate staffers have posted more than 1,000 videos on Sanders’ Facebook and Twitter pages over the past two years, on everything from labor strikes to climate change to the government shutdown. They’ve allowed Sanders to bypass traditional media and, when it comes to audience size, sometimes surpass it.

This week, Sanders’ Senate team streamed his rebuttal to President Donald Trump’s Oval Office address on Facebook, Twitter and YouTube, which went on to garner more than 1.1 million views. In comparison, former Texas Rep. O’Rourke, who is also considering a presidential bid, received almost 200,000 views when he filmed himself on Facebook Live for more than an-hour-and-a-half to refute Trump; a short clip of the video got another 480,000 views on Twitter.

CrowdTangle data recently compiled by a person close to the Sanders campaign also underscores his social media muscle compared with other presidential hopefuls: Sanders’ videos had nearly 1.5 billion views in 2017 and 2018 on Facebook — almost three times more than all other potential 2020 Democratic candidates’ videos combined, according to the report. He also outpaced other possible contenders in Facebook interactions.

Still, other presidential aspirants are building up their digital teams, too, and could ramp them up to overcome Sanders. Sen. Elizabeth Warren (D-Mass.) has waxed about her policy stances and affinity for beer on Instagram Live since announcing her exploratory committee. O’Rourke has proven to be a social media sensation: One video he posted at the end of last year slamming Trump’s proposal for a border wall had more than 5.4 million views.

Critically, some key Sanders alumni have defected to O’Rourke: According to the New York Times, Middle Seat, a digital firm created by former Sanders staffers, is “hoping” to be part of an O’Rourke 2020 campaign. Other former employees not working on the digital staff have joined Warren’s operation or otherwise signaled they are looking at different campaigns.

The defections highlight how drastically different a primary race Sanders would face this time, with potentially dozens of candidates including several others competing for a lane he had to himself in 2016.

Meanwhile, other major changes are underway in Sanders’ inner circle. Last week, CNN reported his 2016 campaign manager, Jeff Weaver, would not return to a 2020 campaign in that role, instead serving as a senior adviser.

Sanders, 77, has not decided whether to run for president a second time. In recent weeks, he has come under fire over reports detailing sexual harassment by male staffers on his 2016 campaign, as well as an alleged pay disparity between male and female aides. Sanders has apologized to the women who said they were harassed and promised that his 2018 Senate campaign implemented new guidelines to prevent sexual misconduct.

“To the women in our campaign who were harassed or mistreated, I apologize,” Sanders said last week. “Our standards, our procedures, our safeguards, were clearly inadequate.”

Sanders has said he will “probably run” for president if he believes he is the best candidate to defeat Trump.

Whoever the eventual Democratic nominee is, that person will need to be able to compete on social media with Trump, who, like Sanders, has used Twitter to bypass mainstream media.

On Saturday, the People for Bernie Sanders hosted more than 400 house parties throughout the country to push Sanders to run in 2020.

Winnie Wong, a co-founder of the group, said the events showed that outside pro-Sanders organizations also have extensive social media power that can be put to use in a presidential election.

“Sanders’ grassroots social media machine is very much driving these house parties,” she said. “We are able to organize without any formal organizing plan in place.”

Source: https://www.politico.com/story/2019/01/14/bernie-sanders-campaign-2020-election-1098795
Droolin’ Dog sniffed out this story and shared it with you.
The Article Was Written/Published By: Holly Otterbein