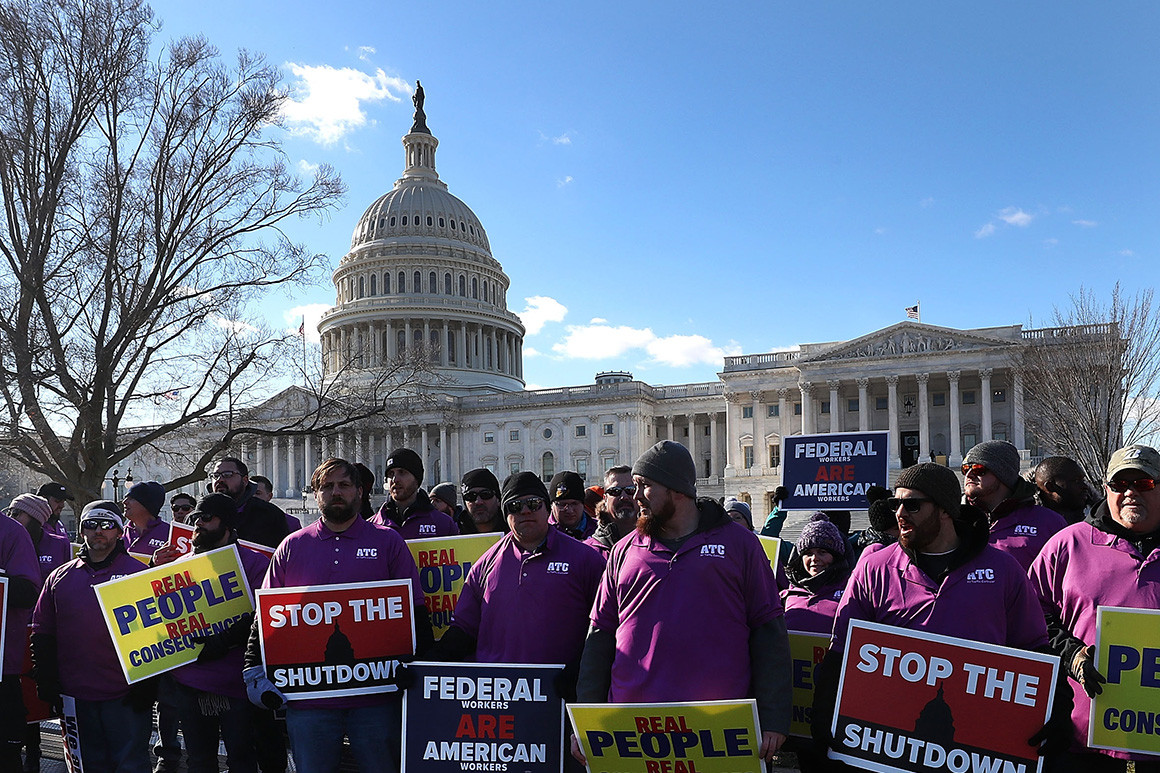 Lawmakers will depart for the weekend Friday after a final round of negotiations to end the 21-day budget stalemate failed, guaranteeing that the partial government shutdown will become the longest in history.

With no headway made over funding President Donald Trump’s border wall, Republican and Democratic leaders have begun to take seriously the president’s threat to declare a national emergency to bypass Congress and secure billions of dollars for a border barrier.

Trump’s executive action, which could be announced as early as Friday, would set off a scramble of legal action by House Democrats, with Republicans unlikely to move to restrain the president even as some in the GOP caucus shun the idea.

The stakes for the shutdown are ratcheting up, as roughly 800,000 federal workers face their first day without a paycheck Friday, which some frustrated lawmakers hope will create new urgency for both sides to resume dealmaking after an unprecedented four weeks of impasse.

“The problem is, there’s no pressure yet. Nobody’s missed a paycheck until Friday,” Rep. Mike Simpson (R-Idaho) said. “We’re getting a lot of phone calls from federal employees who are worried.” He added that when federal workers don’t receive a paycheck, “I think the pressure is going to build.”

Democratic Reps. Gerry Connolly and Don Beyer of Virginia, both of whom have sizeable federal worker populations in their district, said they’ve been hearing from constituents about the personal fallout from the shutdown. But those federal employees are also very clear, both members said, that they don’t want to be used “as pawns” by the president to build his border wall.

“I think people are really reluctant to cave on this for the fear of setting a precedent for years to come with Donald Trump. If he doesn’t like something, he’ll shut the government down,” Beyer said.

Before skipping town, the Senate approved a bill Thursday providing backpay for federal workers affected by the shutdown, at the behest of Democrats including Sens. Tim Kaine (D-Va.) and Brian Schatz (D-Hawaii). The House plans to take up that same bill Friday, according to a Democratic aide, and Senate Majority Leader Mitch McConnell has said the president assured him he’d sign the bill.

The promise of backpay would help ease financial uncertainty for scores of furloughed workers in Washington and in farm bureaus, national parks and federal courts across the country. Thousands of contracted workers, such as those who are hired to prepare food, clean, or provide security for federal agencies, have no such guarantee.

Approving legislation to eventually repay federal employees could lessen some of the P.R. backlash that lawmakers are feeling — particularly newly minted House Democrats who say they’re already feeling pressure to answer for the shutdown they inherited. Still, federal workers won’t see a dime of their paychecks until the 21-day shutdown ends.

The House will vote Friday on its fourth piecemeal funding bill of the week to reopen slices of the federal government, which have all gradually picked off more GOP defections.

On Thursday, 12 Republicans, including former NRCC chairman Steve Stivers of Ohio, backed a bill to fund the TSA. The previous day, just eight Republicans abandoned their party’s position to vote for a funding bill to reopen the IRS and the Department of Treasury.

All of the House bills so far have been taken directly from the Senate’s own spending panel’s docket. But more Republicans privately admit they would be willing to vote for different funding bills next week — such as the ones that the House and Senate have jointly negotiated —if Speaker Nancy Pelosi puts them on the floor next week, signaling that pressure is mounting.

House GOP leaders insist they’re unconcerned about the handful of members who have crossed the aisle, with the vast majority of the GOP conference staying in line with Trump. This week’s vote counts are still far short of overturning a presidential veto.

GOP leaders have been able to maintain that unity in part because the White House budget office has taken unprecedented steps to limit the political pain of the shutdown.

The Trump administration declared this week that it would find a way to make sure that tax refunds are distributed on time, despite a skeleton crew at the IRS. Officials also promised that food stamps for needy families would not be affected, though the Department of Agriculture remains unfunded.

Both are steps that the White House has not taken during previous shutdowns, which Democrats describe as a legally dubious tactic.

After a series of long-shot funding talks collapsed Thursday, the threat of Trump’s emergency declaration began to sink in on Capitol Hill.

House Democrats have begun making preparations for Trump declaring a national emergency in an effort to circumvent Congress and begin wall construction. The president on Thursday gave his strongest indication yet that he’ll use a national emergency declaration to get additional funds for the wall, telling Fox News host Sean Hannity that “if we don’t make a deal with Congress, most likely I will do that. I would actually say I would … I can’t imagine any reason why not.”

Several of the committees with potential jurisdiction over the issue have already been looking into the legality of such a move and Democrats are weighing a potential lawsuit to stop Trump if he does go that route.

“Declaring it an emergency, I suppose, serves a political function for him but then it relocates the whole controversy into the courts,” said Rep. Jamie Raskin (D-Md.), a member of the House Judiciary Committee.

“If that’s what it takes to reopen the government, most of us will probably stomach our misgivings about it and hope that the rule of law will prevail.”

Even House Republican leaders have acknowledged that Trump’s tactic is not ideal, particularly after Republicans railed against former President Barack Obama for taking executive action on immigration issues.

“We would all like to see this resolved legislatively. That’s where our members have been,” House Minority Whip Steve Scalise told reporters Thursday. Still, Scalise signaled that Republicans would not attempt to restrain the president if he took the step.

“I’d like to see us resolve this legislatively but at the end of the day, it is a crisis,” Scalise said.

Some GOP lawmakers openly worry about potential accusations of hypocrisy after Republicans’ denounced Obama’s previous use of executive actions.

“I’d be going nuts if President Obama had talked about doing this,” Rep. Rob Woodall (R-Ga.) said. “You’d have to go back and start pulling some precedent — what are those times? And what does that mean? And what are the limits on it? It’d be a big deal.”

Burgess Everett contributed to this story.

Source: https://www.politico.com/story/2019/01/11/federal-workers-paycheck-shutdown-1097165
Droolin’ Dog sniffed out this story and shared it with you.
The Article Was Written/Published By: hcaygle@politico.com (Heather Caygle)