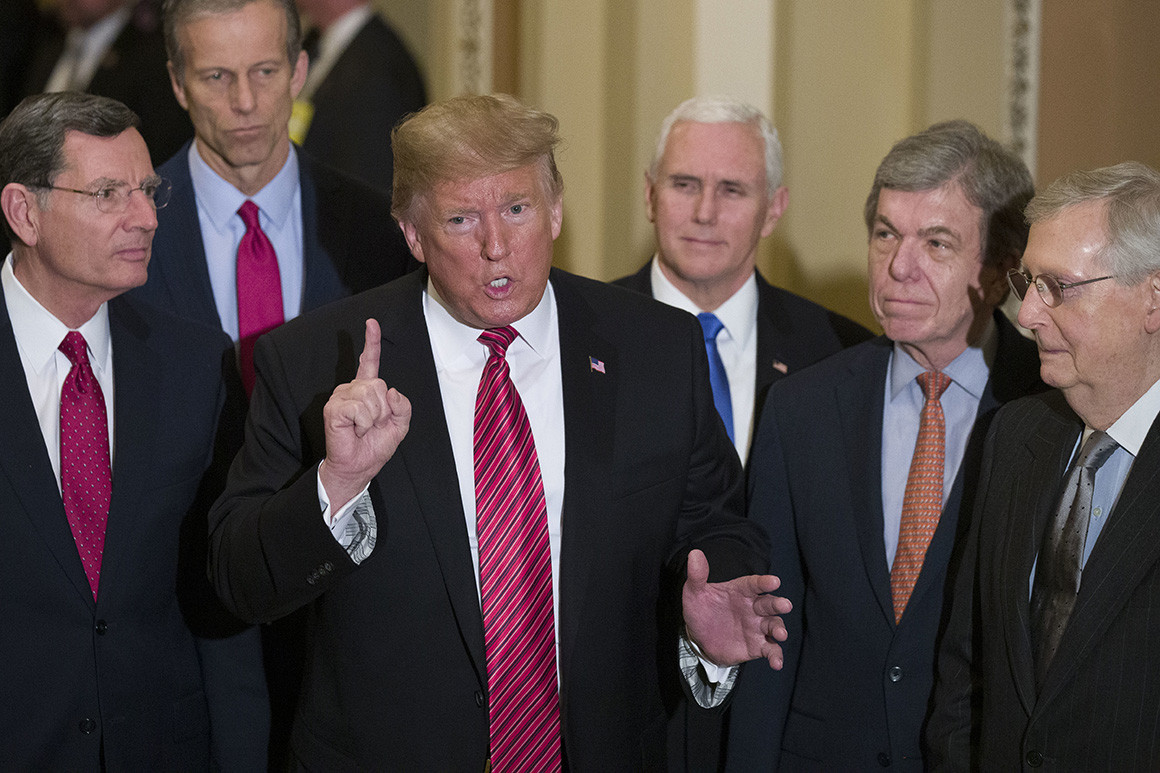 President Donald Trump on Thursday disputed Senate Minority Leader Chuck Schumer’s account of their contentious meeting a day earlier, insisting that he had not slammed his fists on the table after hearing Democrats would not support funding for a wall along the U.S.-Mexico border.

Referring to Schumer (D-N.Y.) in a tweet as “Cryin Chuck,” Trump hit back at Schumer’s claim Wednesday that Trump threw a “temper tantrum” in the meeting with Vice President Mike Pence and congressional leaders, eventually slamming his hands on the table and walking out of the room.

“Cryin Chuck told his favorite lie when he used his standard sound bite that I ‘slammed the table & walked out of the room. He had a temper tantrum,'” Trump tweeted. “Because I knew he would say that, and after Nancy said no to proper Border Security, I politely said bye-bye and left, no slamming!”

He elaborated on his version of events later Thursday, telling reporters as he left for Texas to travel to the U.S.-Mexico border that “I don’t have temper tantrums.”

“If you ask Mike Pence — let me just tell you something, I very calmly said, ‘If you are not going to give us strong borders, bye-bye,’ and I left. I didn’t rant. I didn’t rave like you reported,” Trump said, accusing Schumer and Pelosi of attempting to create a false narrative.

The negotiations, which both sides agreed on Wednesday had gone nowhere, came two days before 800,000 federal workers are expected to miss paychecks due to a partial government shutdown now in its 20th day.

Wednesday’s negotiations at the White House began with Trump reportedly handing out candy to lawmakers, but went downhill not long after. Trump tweeted following the meeting that it had been a “waste of time,” and that he left after asking Pelosi whether she would be open to providing funding for a border wall if he agreed to reopen the government.

On Thursday, the president claimed that negotiations with Pelosi and Schumer were going so poorly that he thought China “is much easier to deal with.”

The Trump administration has waged a trade war with China over its shady business practices, accused the country of cyber warfare and weighed sanctions over human rights abuses there. But Trump on Thursday said he finds negotiating with China “in many ways to be far more honorable than crying Chuck and Nancy.”

Trump on Thursday repeated his insistence that Republicans were unified in their support for the border wall, a claim countered by the votes of eight House Republicans who joined Democrats on Wednesday in voting for legislation to reopen portions of the government. On the other side of Capitol Hill, several Senate Republicans in recent days have begun to voice reluctance about Senate Majority Leader Mitch McConnell’s decision to stay out of shutdown negotiations and not take up the individual spending bills being passed by the House.

“There is GREAT unity with the Republicans in the House and Senate,” Trump claimed Thursday. He accused the media of “working in overdrive to make the story look otherwise,” though the White House launched a last minute blitz aimed at mitigating GOP defections, a strategy which seems to have, for the most part, been successful.

Source: https://www.politico.com/story/2019/01/10/trump-refutes-schumer-account-meeting-1093875
Droolin’ Dog sniffed out this story and shared it with you.
The Article Was Written/Published By: coprysko@politico.com (Caitlin Oprysko)