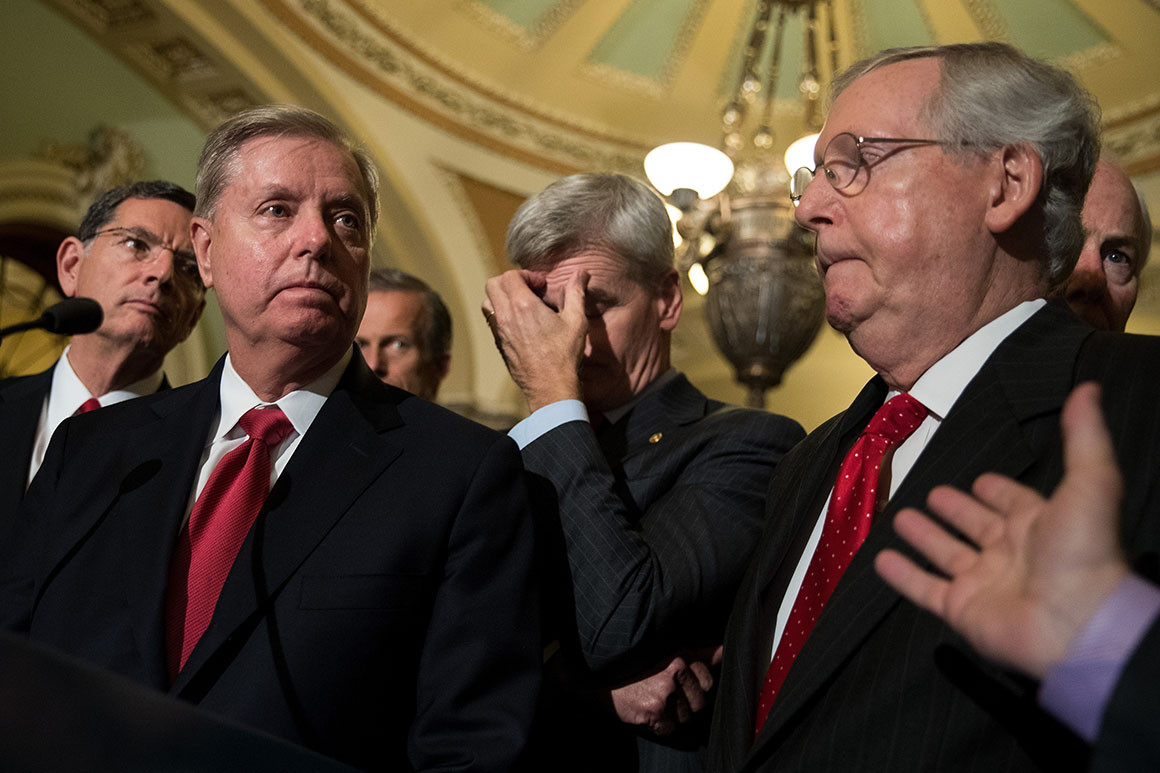 President Donald Trump has rejected a plan proposed by a bloc of Senate Republicans who had hoped to break an impasse over the government shutdown, leaving Congress and the White House with little obvious way out of the extended battle over Trump’s border wall.

On the 20th day of the shutdown, the GOP group tried to jump start bipartisan talks before Trump declares a national emergency to get his wall. But the president rejected their idea to allow congressional committees to sort out his border wall request while the government reopened, deeming the idea likely to leave him with nothing to show for the shutdown.

Vice President Mike Pence and acting Chief of Staff Mick Mulvaney had been consulting with senators about the matter on Thursday. Pence and Mulvaney took the idea to the president, who shot it down, according to multiple people directly involved in the talks. While the congressional committees could still take up Trump’s border wall plan, the president opposes the idea of opening the government before serious wall negotiations have begun, the people said.

“I think we’re stuck. I just don’t see a pathway forward. I don’t see a way forward,” said Sen. Lindsey Graham (R-S.C.), who had been leading the effort.

Earlier on Thursday, GOP senators met with Senate Majority Leader Mitch McConnell (R-Ky.) and Pence to pitch their idea: First, the Senate Appropriations Committee will take up legislation meeting the president’s $5.7 billion border wall request. That bill would be open to amendment in the committee and then come to the floor; meanwhile most or all of the shuttered government would be reopened while the Senate begins a broad immigration debate aimed at passing a bipartisan bill.

The hope was that the long shot effort would end the current dynamic of Trump feuding endlessly with House Speaker Nancy Pelosi and Senate Minority Leader Chuck Schumer. But Trump is continuing to seek guaranteed wall money, and the senators’ idea could have easily reopened the government while a bill funding the wall died in the Senate or the Democratic House.

As a starting point in the immigration debate, Graham suggested providing temporary protections, renewed every three years, for some young undocumented immigrants and those who came to the country after natural disaster. In exchange, the president would get billions in fencing.

Democrats would not support the idea, though Graham and his allies argued it would just be a starting point and the Senate would be allowed to work its will and shape the bill to be more amenable to Democrats.

“It comes from the president, he’s made a proposal. Why don’t we do what the Senate does: Take his proposal, have a hearing on it, evaluate the merits of it and amend it in a fashion consistent with the will of the Senate. How about just going back to the way the place works rather than reinventing the wheel?” said Graham, a close Trump ally.

It’s not clear if either McConnell or Appropriations Chairman Richard Shelby (R-Ala.) ever weighed in directly on the idea, which would have sent wall funding and immigration bills to the Shelby’s spending panel and Graham’s Judiciary Committee.

Graham’s Judiciary Committee would likely take up a piece of an immigration proposal.

“If President [Barack] Obama sent a letter to the Senate saying we’ve got a problem on the border and I need $7.2 billion, I think either the Appropriations and the Judiciary Committee would take it up promptly and we’d consider it,” said Sen. Lamar Alexander (R-Tenn.), a key immigration dealmaker.

Plus, Democrats were highly skeptical. They all remember the president and his allies ripping up a tentative agreement providing $25 billion in border security in exchange for a path to citizenship for hundreds of thousands of Dreamers.

Graham separately has pitched at least one Senate Democrat on a proposal that would deliver about $8 billion in fencing over two years, according to a source familiar with the talks, in exchange for temporary protections for immigrants protected under the Deferred Action for Childhood Arrivals and Temporary Protected Status. Those proposals won’t fly with even the most conservative Democrats.

Deal-seeking Republicans believed their long shot proposal was better than doing nothing.

“If I didn’t think this was a way out, I wouldn’t be going to this meeting,” said Sen. Lisa Murkowski (R-Alaska) as she walked into McConnell’s office for a meeting with Graham, Shelby, McConnell, Alexander and Sens. Thom Tillis (R-N.C.) and Susan Collins (R-Maine).

But left out were Senate Democrats, who have final say over anything that comes up in the Senate due to their filibuster powers. Sen. Joe Manchin (D-W.Va.) said he’s open to seeking a compromise with Republicans, though he hasn’t been invited to meetings, and neither has Senate Minority Whip Dick Durbin (D-Ill.), Graham’s frequent immigration partner.

“I don’t know what his approach is… temporary protections for Dreamers for the wall?” Durbin said, chuckling at the idea. “I hope the Republicans will continue their conversations and reach a point where they join us and reopen the government as quickly as possible. And as far as negotiations beyond that, I’m wide open.”

Eliana Johnson contributed to this report.

Source: https://www.politico.com/story/2019/01/10/republican-senators-government-shutdown-1096118
Droolin’ Dog sniffed out this story and shared it with you.
The Article Was Written/Published By: Burgess Everett

California punk progenitors NOFX shared a video for their song “‘Linewleum,” a clip featuring M Shadows of Avenged Sevenfold. It’s the first single released from Single Album, which is due out Feb. 26 on Fat Wreck Chords. Single Album is the band’s 14th full-length LP and contains 12 new tracks. It was recorded at Motor Studios in San... [...]

Siamese Twins, More Rice, and Cho Oyu are reinventing the sound of Bangkok. Read full story on the Bandcamp Daily. Source: https://daily.bandcamp.com/scene-report/electronic-music-thailand-list Indie Brew found this story and shared it with you. The Article Was Written/Published By: Carl Dixonv [...]