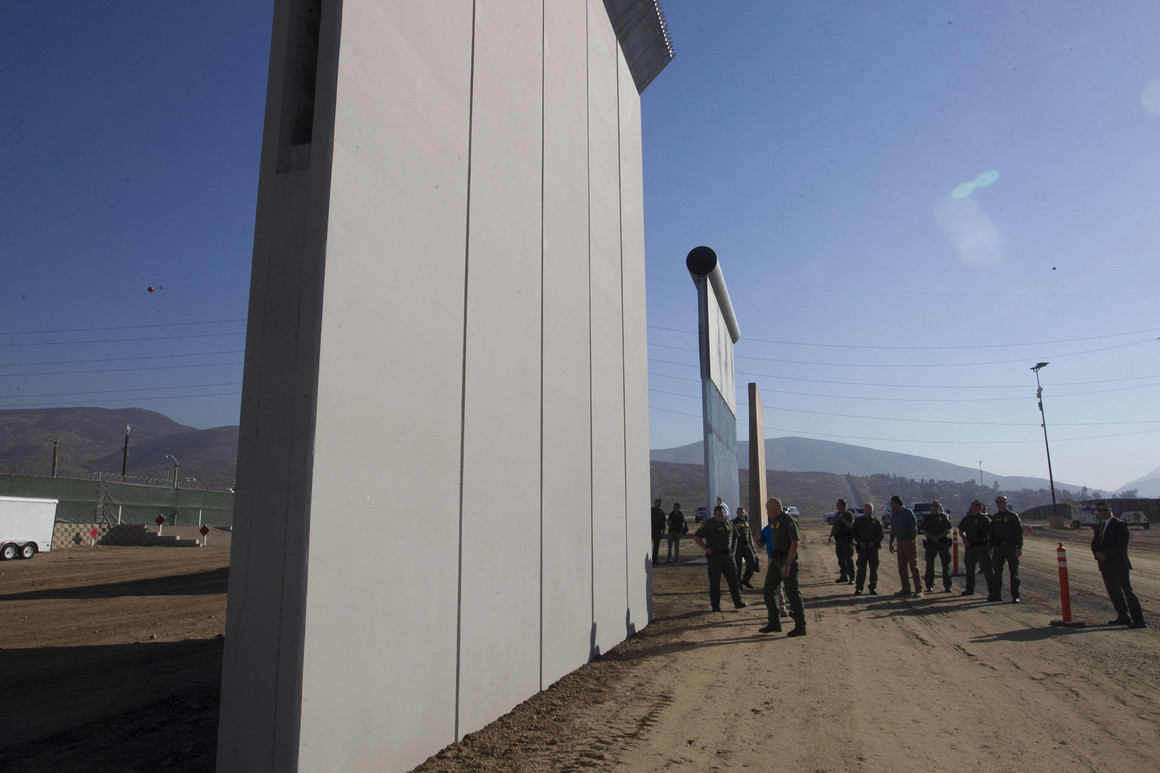 President Donald Trump tweeted from Camp David on Sunday his latest vision for the border wall he has promised for more than two years: “We are now planning a steel barrier rather than concrete,” Trump wrote.

That might have come as a surprise to anyone who still assumes that Washington’s most intense debate revolves around a traditional concrete wall. But it was only the latest in a series of changing and sometimes confusing visions Trump has offered for the proposed structure over which he has forced a partial shutdown of the federal government.

When he delivers a national address on the subject Tuesday night, Trump will apparently be arguing not for the concrete wall of his first imagination, nor the technological or virtual one his campaign once promoted — and certainly not the solar-paneled fence he once envisioned — but an impenetrable, artistically-designed barrier constructed with American-made steel.

If recent history is a guide, even that could still change. A review of Trump’s public statements about the wall dating back to his June 2015 presidential campaign announcement reveals an expansive and ever-shifting list of architectural features, eco-friendly add-ons, aesthetically pleasing designs, and height and width requirements. The former real estate mogul went from an original vision of precast concrete slabs — like those used “for parking garages,” Trump told a campaign crowd in August 2015 — to a “digital wall” touted by his campaign surrogates in mid-2016, then to a transparent structure made of rebar and steel.

In October 2015, Trump said a suitable barrier must rise 40 to 50 feet and span at least 1,000 miles across the 1,954-mile U.S.-Mexico border. But in his first interview as president-elect, he told CBS that he might settle for new fencing “in certain areas.”

Then there was Trump’s July 2017 statement that “there is a very good chance we can do a solar wall.”

That comment was widely mocked — especially given that his administration had already posted a solicitation for border wall prototypes whose lengthy list of specifications made no mention of solar features. They instead asked for a “physical[ly] imposing” structure with a minimum height requirement of 18 feet, a U.S.-facing north side that is “pleasing in color in texture,” anti-climbing mechanisms, and the ability to protect against digging or tunneling beneath.

All eight prototypes — four of which were made of solid concrete and four of which relied on other materials, including steel — were built near the border in Otay Mesa, Calif., and tested throughout last year for their breachability. Trump paid a visit to the California desert last March to inspect the prototypes himself, promising, as he said at the time, to “pick the right one.”

Despite an investment of nearly $20 million in the prototype project, however, a July 2018 report by the U.S. Government Accountability Office concluded that nearly every model presented “substantial” construction and engineering challenges. The report declined to indicate how each prototype performed in other areas, like scalability, out of security concerns.

“I understand why you sometimes want to evaluate your own thinking and see what new ideas industry can produce, but it does seem like a lot of time and money spent on prototypes to arrive at the same conclusion, which is that all fencing designs have limitations and all are basically penetrable with enough time and tools,” said Thad Bingel, former chief of staff for Customs and Border Protection under President George W. Bush.

Trump, who has also wavered on the length, location, and cost of a border wall, as well as whether or not Mexico or U.S. taxpayers would fund it, has said he changes his description of the barrier to win support from skeptical lawmakers.

In a tweet last week explaining that the wall could consist of “steel slats,” Trump said that design would give critics “a little bit of an out.”

“We don’t use the word ‘wall’’ necessarily, but it has to be something special to do the job,” he added.

Two administration officials familiar with the planning told POLITICO that any newly-erected barriers approved for construction along the border would likely resemble a “bollard-style fence” that immigration officers can see through, as opposed to a wall-like structure with zero visibility.

True to his nationalist form, Trump has insisted that such a structure would be domestically produced: “I’ll have it done by the United States Steel Corp. by companies in our country that are now powerful, great companies again,” Trump said at a White House press conference last week.

Bollard barriers —vertical posts made of steel, cement, and other materials with limited space in between — already exist along certain parts of the border, including just south of the San Ysidro Port of Entry, the busiest land border crossing in the U.S., and have been deemed mostly effective by border protection agents over the years.

“In a sense, any border barrier is a glorified speed bump,” said Mark Krikorian, head of the conservative Center for Immigration Studies, whose studies Trump has often cited in support of a border wall.

“The fact that [Trump] is now talking about the ‘beautiful steel slats’ suggests that the border patrol has made him understand that they need to be able to see through any structure, that rain needs to be able to get it through it, etc.,” Krikorian added.

Former White House chief of staff John Kelly said in an exit interview with the Los Angeles Times last month that Trump bailed on wanting a solid concrete a long time ago.

“To be honest, it’s not a wall. The president still says ‘wall’… but we left a solid concrete wall early on in the administration, when we asked people what they needed and where they needed it,” Kelly told the outlet.

Homeland Security Department officials have briefed Trump multiple times on topographic challenges as well as irrigation and land ownership issues that his administration would face in building a uniform barrier along the entire U.S.-Mexico border.

“This was a campaign promise by a guy who wasn’t really familiar with the border — he was from New York — and the problem is once you get your eyes on it and see these briefings, you realize exactly what you’re dealing with,” said a former DHS official. “We used to have a saying that ‘If you’ve seen one mile of border, you’ve seen one mile of border’ because it really does change dramatically by area.”

One White House official said the routine briefings have made Trump “increasingly open-minded” about boosting detection capabilities in lieu of a physical barrier along parts of the border where geographic advantages already deter illegal crossings, or where vast stretches of privately-owned land would force the government to pursue eminent domain.

But if Trump is open to alternative forms of border security, his receptiveness has been hard to spot — particularly as he repeats his firm claim that “walls work.”

Last month, Trump argued — inaccurately — that former President Barack Obama’s Kalorama home is surrounded by a 10-foot “wall,” proving that his own political opponents rely on walls for “safety and security.” Photos of the home’s exterior show security fencing along the front, which was reportedly added at the request of U.S. Secret Service, but no towering concrete wall that would make the 8,200 square foot Tudor home invisible from the street.

Trump has also invoked walls in foreign countries. “In Israel the wall is 99.9% successful,” he wrote in a tweet on Dec. 21. (It was unclear whether Trump meant barriers Israel has built along its West Bank to block Palestinian terrorists from entry, or a wall along its southern border with Egypt originally intended to curb the flow of African migrants.)

“Properly designed and built Walls work, and the Democrats are lying when they say they don’t,” Trump added.

In a Fox News interview last week, Trump turned his attention to Vatican City, which maintains walls that were built in the ninth century to protect the Catholic enclave from attack — prompting critics to say that Trump is pursuing a “medieval” solution. (Visitors can freely explore most of the Vatican city, excluding areas housing government officials and the pope.)

Trump has even cited the ancient Great Wall of China as an inspiration. That wall was “13,000 miles, folks, and they didn’t have Caterpillar tractors,” he said in a Super Tuesday speech in 2016.

Most White House allies aren’t concerned about Trump’s odd comparisons or ever-changing descriptions of the style of the wall. What matters to them is his willingness to fight— in this case by refusing to sign spending legislation that omits wall funding — for what they believe are long-overdue improvements to border security, including updated physical barriers, technological enhancements, and an increased number of border patrol agents.

“The point to the word ‘wall’ was always to communicate in shorthand that [Trump] was serious about controlling the border,” Krikorian said. “I don’t mean it was purely symbolic — he was definitely talking about a physical barrier — but it was a way to encapsulate in one word his intentions.”

Source: https://www.politico.com/story/2019/01/08/trumps-vision-wall-concrete-steel-changes-1088714
Droolin’ Dog sniffed out this story and shared it with you.
The Article Was Written/Published By: Gabby Orr