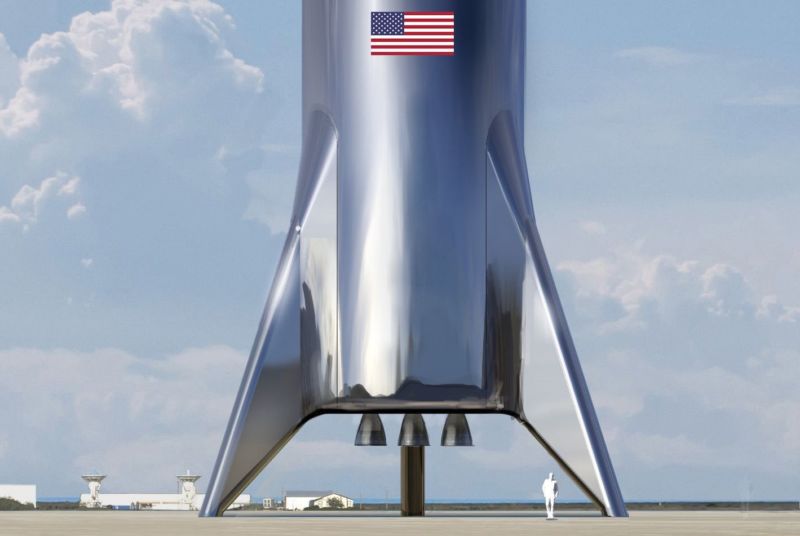 Enlarge / The Starship test vehicle, currently under assembly, will look similar to this illustration when finished. (credit: Elon Musk/Twitter)

Eleven months ago—just after SpaceX astonished the world by launching and landing its titanic Falcon Heavy rocket while beaming back images of a red Tesla leaving Earth orbit—company founder Elon Musk had already begun to look beyond the moment.

The Falcon Heavy was a big, capable rocket. But it wasn’t large enough to fulfill his aspirations of reaching Mars. Neither did the company have a spacecraft capable of landing there. “They really need to be way bigger than that,” Musk said of the Falcon Heavy rocket at the time. Moreover, he noted that the launch in early February 2018 had confirmed the company’s ability to model rocket launches on computers. “It gives me a lot of faith for our next architecture. It gives me confidence that BFR is really quite workable.”

In this case, BFR stood for Big Falcon Rocket. This vehicle has since been renamed “Super Heavy,” and it will launch the spacecraft SpaceX is building to land on Mars, take off from Mars, and land back on Earth. The rocket is certainly titanic in size, but the spacecraft it will carry—since branded Starship—is the greater innovation. No nation or company has ever built a single vehicle capable of flying dozens of people into space (especially deep space), landing on distant worlds, and then flying back to Earth.

Source: https://arstechnica.com/science/2019/01/elon-musk-is-really-really-excited-about-his-starship/
Droolin’ Dog sniffed out this story and shared it with you.
The Article Was Written/Published By: Eric Berger