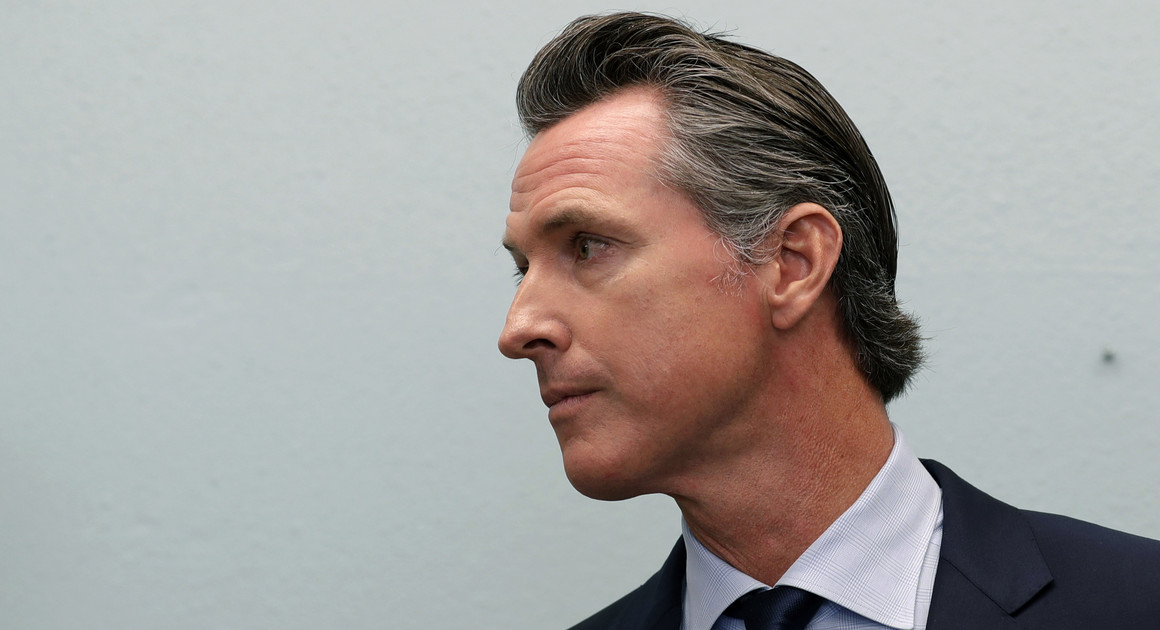 SACRAMENTO — Gavin Newsom’s two-year-old son Dutch stole the show at his father’s inauguration Monday — and probably did the new governor a favor.

That’s the consensus in Sacramento after Dutch wandered on stage during his father’s inaugural speech — a defiant message to “an administration in Washington hostile to California’s values and interests” — allowing the telegenic new governor to show off his familial side.

Newsom is widely assumed to have national ambitions, and his son’s walkabout on stage — which the governor’s camp insisted was unscripted — was also conveniently timed, as he highlighted his opposition to the Trump administration’s immigration policies and his own support for parental leave and expanding higher education.

Newsom’s address, delivered to a standing room crowd of 2,500 in the shadow of the State Capitol, just moments after he took the oath as California’s 40th governor, took aim at what he called “powerful forces arrayed against us.”

They are “not just politicians in Washington — but drug companies that gouge Californians with sky-high prices,’’ he said to the crowd packed with legislators, lobbyists, fundraisers and elected officials. In one of his biggest applause lines, Newsom added that “we will offer an alternative to the corruption and incompetence in the White House. Our government will be progressive, principled and always on the side of the people.”

But then Dutch scrambled onto the stage.

“This is exactly how this was scripted,” Newsom himself said with a smile.

And Dutch stuck around, delighting the crowd and illustrating a generational shift that Newsom’s camp has been working hard to emphasize in recent days. Newsom, 51, is the father of four young children with his wife, Jennifer Siebel Newsom, and takes the reins from the outgoing four-term Jerry Brown, 81.

Newsom leaned into the moment; he scooped up the boy, kissed him and kept going — railing against Trump’s immigration policies separating families and children.

“All kids — not just the children of a governor and a filmmaker — should have a good life in California,’’ he said. “Not ripped away from their parents at the border. … Not left hungry while politicians seek to pour billions into a wall that should never be built.”

An admiring Los Angeles Mayor Eric Garcetti declared Newsom’s moment “superb,’’ he said. “As a parent, I’ve been there before when a child wandered on stage, and he scored a victory for all parents.”

Dutch wandered the stage, refusing to be corralled by his mother or his brother, who then largely just let him roam.

Newsom — who has unveiled a proposal to invest $1.8 million in early childhood education, and another to extend parental leave to six months, drew laughs by remarking that parents need help “especially in those early critical years.”

As for the substance of his speech, Newsom acknowledged the weighty responsibility of governing the world’s fifth largest economy, home to 1 in 8 Americans — but also home to the nation’s largest numbers of undocumented immigrants and its highest level of poverty. He acknowledged the state’s “stagnant wages,’’ rising rents, “inequality of wealth,’’ and added, “we have a homeless epidemic that should keep every one of us up at night.”

But as Newsom begins his leadership of a state of 40 million residents dominated by Democrats — who now hold a supermajority in both houses of the state legislature, and every statewide office — he also issued a stern warning about overspending that also appears aimed directly at a hungry legislature.

He vowed to be “prudent stewards of taxpayer dollars, pay down debt, and meet our future obligations. And we will build and safeguard the largest fiscal reserve of any state in American history. But let me be clear: We will be bold. We will aim high and we will work like hell to get there.”

Though he never uttered the words “state of resistance,’’ Newsom argued that too much is at stake not to resist the politics of Washington.

“What we do today is even more consequential, because of what’s happening in our country,’’ he said. “People’s lives, freedom, security, the water we drink, the air we breathe — they all hang in the balance. The country is watching us. The world is waiting on us. The future depends on us. And we will seize this moment.’’

The former lieutenant governor promised to represent “a California for all,’’ including rural Californians who live in the most economically challenged and conservative rural regions of the state.

“I intend to represent all Californians, not only those who voted for me,’’ he said. “I recognize that many in our rural communities believe that Sacramento doesn’t care about them — doesn’t even really see them. Well, I see you. I care about you. And I will represent you with pride.”

Newsom’s inauguration was attended by former governors Gray Davis, Arnold Schwarzenegger and Brown as well as House Speaker Nancy Pelosi, a longtime mentor and friend of the former San Francisco mayor, who received a standing ovation and cheers when she arrived at the celebration. Also on hand were former Secretary of Homeland Defense Janet Napolitano, now the president of the University of California, San Francisco Mayor London Breed, and an array of elected officials from around the state.

Source: https://www.politico.com/states/california/story/2019/01/07/gavin-newsoms-son-steals-the-show-775847
Droolin’ Dog sniffed out this story and shared it with you.
The Article Was Written/Published By: Carla Marinucci