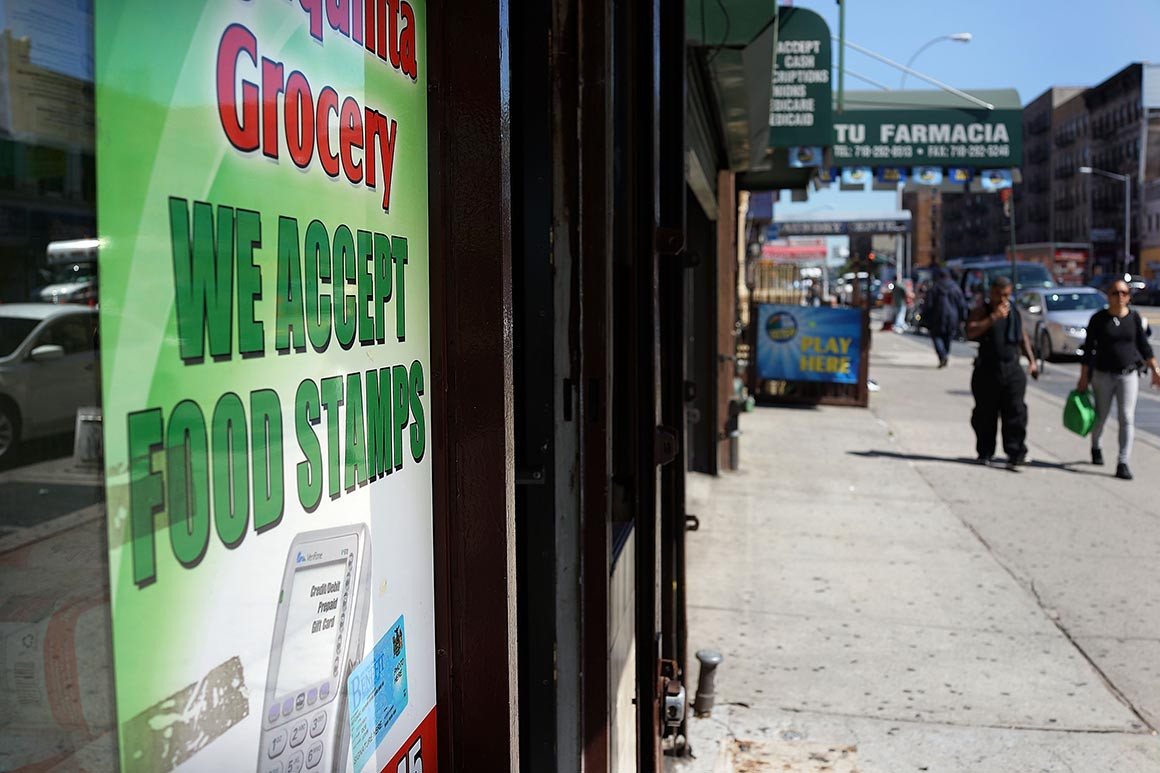 As the partial government shutdown extends into its third week, the Department of Agriculture won’t say how long it can keep paying out food stamp benefits for the nearly 39 million people who depend on them each month.

The White House and House Democrats, locked in a bitter political struggle over border wall funding, have started raising alarm that the food stamp program, one of the most significant forms of aid for low-income Americans, could run out of funds in coming weeks if Congress doesn’t act — an apparent attempt by both sides to increase pressure on Congress to end the shutdown.

Senior administration officials said last week they think the program has enough money for January, but not enough to cover all benefits in February, a scenario that could lead to a major cutback in benefits for millions of recipients, The Washington Post reported on Friday. The following day, House Speaker Nancy Pelosi’s office blasted out the story to reporters.

But the Trump administration may in fact have more leeway to use reserve funds to keep food stamps afloat if Congress and President Donald Trump can’t reach an agreement to break the impasse, which has shuttered nine of 15 federal departments, including the Department of Agriculture, for 17 days.

The USDA, which administers the food stamp program, has declined to answer questions about its reserves and would not provide an estimate of when the program would run out of cash.

“It creates a lot of confusion for people,” said Russell Sykes, director of employment and economic wellbeing at the American Public Human Services Association, a nonprofit that represents state agencies that run SNAP at the state level. “We can never really get a good handle on reserves. They’re very tight-lipped about it.”

The Supplemental Nutrition Assistance Program, or SNAP, still known as food stamps to many, is in a peculiar budgetary category. It’s a mandatory entitlement program that continues on autopilot for people who meet income and eligibility requirements, but the funds are appropriated by Congress. Other major mandatory entitlement programs, like Social Security, are automatically funded.

In the past, this has largely been viewed as a technicality, and the money needed to keep SNAP running has usually been waived through without fanfare. Congress has never let funding for SNAP run out to the point where the program defaulted on benefits.

In 2015, the government came close to not having money to cover benefits, but Congress came through with the funds at the eleventh hour, as the fiscal year drew to a close.

This time around, a continuing resolution that expired on Dec. 21 gave SNAP the funds needed to continue paying benefits this month without any issue. The question now is how long the government can continue meeting its obligation to pay out benefits if Congress doesn’t step in with new money.

In September, the last month for which data was available, the program cost about $4.7 billion per month.

In past years, Congress gave USDA a $3 billion reserve fund each year for SNAP, in part to help with shutdown situations, with an expiration at the end of each calendar year.

In the omnibus spending package passed early last year, Congress gave USDA $3 billion for the reserve fund and provided a longer leash. The funds were made available until the end of 2019, “for use only in such amounts and at such times as may become necessary to carry out program operations.”

Some experts believe USDA’s food-stamp cushion could be closer to $6 billion, which would cover February, though Congress would need to come up with money beyond that point.

It’s also possible the department has extra funds it can use. SNAP participation has declined in recent years as the economy has improved, which has lowered overall costs. For example, in contrast to the $4.7 billion price tag from September, it cost the government $6.6 billion to cover SNAP benefits in October 2017, when enrollment was higher.

USDA declined to answer questions not only about its reserve funds but also about the department’s contingency plans for the program.

“We are currently looking at options for SNAP,” said Tim Murtaugh, a spokesperson for the department. “The best course of action would be for Congress to send a legitimate appropriations bill to the president to end the lapse in funding.”

In the meantime, however, both the White House and Democrats are trying to use SNAP as a point of leverage.

“If the program is being used as a pawn in a broader political effort, that may be why they’re not answering questions about the basic numbers,” said Kevin Concannon, who served as undersecretary for nutrition at USDA during the Obama administration, adding: “They should be clear on that.”

“Nobody likes this kind of uncertainty,” Concannon said. “States get very nervous, especially with this administration, that they’re going to be stuck without adequate resources.”

Anti-hunger advocates, for their part, say the situation is a reminder of the risk posed to SNAP if it’s not automatically funded like other entitlement programs.

The lack of clarity from USDA is already leading to confusion in the states. After press reports said the shutdown risked SNAP running out of the money needed to pay out benefits for millions of recipients, officials in Pennsylvania, for example, countered that the program would continue.

Over the weekend, an apparent technical outage of SNAP’s electronic benefits transfer system in a grocery store in Indiana led to widespread press reports of a lapse in benefits that was triggered by the government shutdown. The news got as far as Hawaii before it was corrected.

Janey Thornton, who served as deputy undersecretary for nutrition at USDA during the Obama administration, told POLITICO that the department usually had about a month of cushion for various nutrition programs, though the funding situation differs somewhat for each.

“It could potentially have a huge impact if it goes beyond that,” Thornton said, referring to the shutdown. “It is very scary.”

Thornton said she’s also worried about a slew of other nutrition programs that are smaller than SNAP and don’t get as much attention, like school meals and programs that provide food to Native American communities.

In addition to questions about USDA’s ability to pay for SNAP benefits next month, it’s also not clear whether USDA has the authority to cut back benefits that people are legally entitled to during a lapse in appropriations.

“SNAP’s statute has an unusual design,” according to David Super, a law professor at Georgetown University who follows SNAP closely. “Although it provides a procedure for reducing benefits if Congress enacts an inadequate appropriation, nothing authorizes USDA to reduce or eliminate benefits when there is no appropriation enacted at all.”

Source: https://www.politico.com/story/2019/01/07/food-stamps-government-shutdown-1062090
Droolin’ Dog sniffed out this story and shared it with you.
The Article Was Written/Published By: HBottemiller@politico.com (Helena Bottemiller Evich)