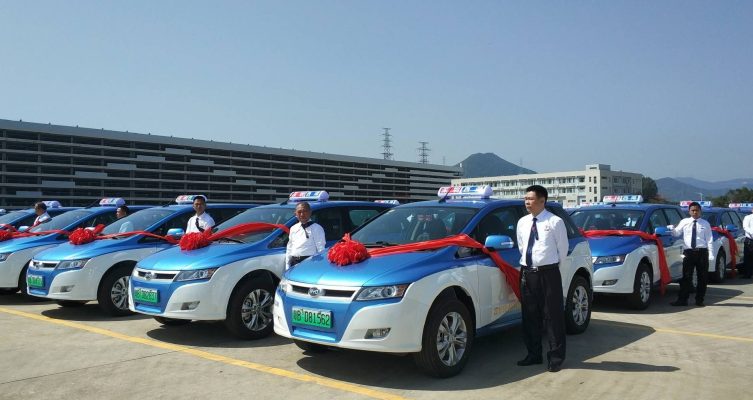 Roads in a Chinese city have gotten much quieter in recent years. Shenzhen, widely called the Silicon Valley of hardware, has been pouring resources to phase out rattling diesel vehicles chugging through the city of 12 million people.

All public buses in the city went electric by the end of 2017. Taxis soon followed suit. The Transport Commission of Shenzhen announced on its official site this week that 99 percent of the city’s more than 21,000 cabs are now powered by batteries.

However, 1,350 vehicles from the fleet are still waiting to be deployed because of a shortage of charging stations, a sign the city’s infrastructure is not up to speed with its electric car movement. A survey done by newspaper Southern Metropolis Daily last year showed that 80 percent of Shenzhen’s cab drivers were unsatisfied with the supply and allocation of charging stations in the city.

Shenzhen, where Warren Buffet-backed battery and car manufacturer BYD stations its headquarters, is spearheading China’s electric dream. Its electrifying evolution dates back to 2010 when the city became part of China’s grand plan to pilot hybrid and all-electric vehicles with deep subsidies for both manufacturers and consumers. Underneath the ostensible goal of improving air quality is China’s ambition to be a world leader in battery technologies, which could subsequently drive employment and export sales.

Shenzhen’s traffic authority claims that electric cabs are 70 percent more energy efficient compared to those powered by fossil fuel. The entire fleet of electric cabs is estimated to cut carbon emissions by 856 thousand metric tons a year for Shenzhen. That’s equivalent to greenhouse gas emissions neutralized by 1,007,445 acres of US forests in one year, according to a greenhouse gas calculator provided by the US Environmental Protection Agency.

It’s worth noting that the environmental perks of EVs are dependent on how a city is generating electricity. The dirtier the energy source, like coal and oil, the dirtier its electric cars are.

A major beneficiary in Shenzhen’s green push is BYD, which manufacturers a big portion of the city’s non-petrol buses and taxis. Recently, the carmaker has made forays into overseas markets to electrify their public transportation system as China weighs subsidy cuts on electric cars. The Shenzhen automaker is trecking across the globe and shipping fleets to the UK, Chile and Egypt. In Asia, it’s sold electric vehicles to neighboring Macau, Singapore and Japan.

Source: https://techcrunch.com/2019/01/04/shenzhen-electric-taxis-push/?utm_source=feedburner&utm_medium=feed&utm_campaign=Feed%3A+Techcrunch+%28TechCrunch%29
Droolin’ Dog sniffed out this story and shared it with you.
The Article Was Written/Published By: Rita Liao