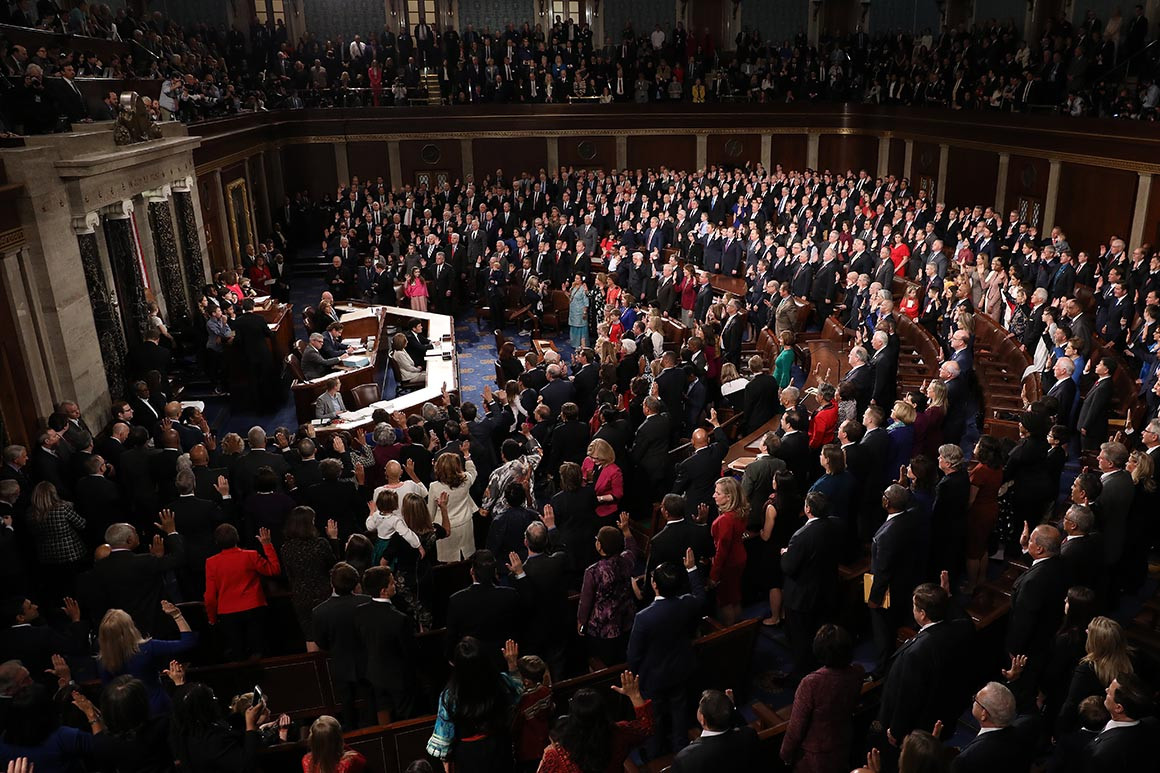 It’s not the way they wanted to start the 116th Congress.

On a day that should have been solely marked by ceremony and celebration, lawmakers couldn’t shake the gloom of a government shutdown that has no end in sight.

“It does put a damper on things. We’re all thinking about those people that are working without pay today, or who are furloughed,” said Rep. Raja Krishnamoorthi (D-Ill.), adding that he’s been speaking to constituents who’ve been affected by the shutdown.

It’s the first time in history that a government shutdown has dragged on from one Congress to the next, underscoring a sense of dysfunction in Washington that appears to have only intensified in the Donald Trump era.

But instead of advancing the first pieces of their ambitious progressive agenda, Speaker Nancy Pelosi and her Democratic majority were setting up Thursday night votes on legislation to reopen the federal government. That’s despite the fact that the plan has already been panned by Senate Majority Leader Mitch McConnell (R-Ky.), ensuring the partial shutdown will drag on well past its 13th day.

“I think everybody is frustrated about the shutdown,” said Sen. Shelley Moore Capito (R-W.Va.). “I’ve said repeatedly it’s kind of a road to nowhere so we need to find a solution.”

But, she added, “it’s still not going to spoil the day for us and for the new people that are coming in.”

The funding lapse has left a particularly dark cloud over the heads of lawmakers who felt encouraged by the passage of so many other spending bills last year. Congress funded three-quarters of the federal government before running into a shutdown over Trump’s demand for border wall money.

“I hate it, it’s a terrible way to govern,” said Rep. Mike Simpson of Idaho, a veteran House Republican who helped seal a deal on funding for the Energy Department, among other agencies. “It could potentially be a very long shutdown.”

Asked if things could become awkward if the shutdown drags out, Simpson replied with a laugh: “It’s awkward now!”

Plenty of the pomp and circumstance of the beginning of a new Congress was still evident Thursday.

Just before Pelosi formally reclaimed the gavel, dozens of freshly elected Democrats crowded the chamber to receive their first tokens of the office, including their pins, voting cards and congressional license plates, as they mingled with their new colleagues for the first time.

It was a show of pure joy, coming after an election that swept 67 new Democrats into the House. Members, old and new, introduced each other to their spouses and grandchildren. Many snapped photos, flagrantly breaking the chamber’s no-cameras rule, as prominent first-termers like Alexandria Ocasio-Cortez (D-N.Y.) and Abigail Spanberger (D-Va.) walked by.

On the Senate side, the 10 newly elected members rode the subways with their families at the same time that the Senate’s spending chief, Richard Shelby (R-Ala.), warned that the shutdown could go on for “months and months.”

Meanwhile, the impasse over Trump’s border wall has only worsened as nine federal agencies prepare to enter their third week without funding. Hundreds of billions of agency dollars — and the paychecks of 800,000 federal workers — are at risk the longer the shutdown continues.

Pelosi, McConnell, Senate Minority Leader Chuck Schumer (D-N.Y.) and House Minority Leader Kevin McCarthy (R-Calif.) will head back to the White House for yet another sit-down with Trump on Friday. The plan from there, according to multiple lawmakers and aides, is entirely unclear, with both sides increasingly dug in.

The funding lapse remained in focus even as McConnell and Schumer took to the floor to welcome their new colleagues to the Senate.

“This new Congress is under the shadow of a government shutdown,” Schumer said. “Only one person is to blame for this predicament: President Trump.”

McConnell accused Democrats of “political theater” in their attempt to reopen the federal government with a plan that is dead-on-arrival in the Senate, adding that the party is only concerned with its “political standoff” with Trump.

The Senate and House are expected to leave town this weekend without a resolution, showing a glaring lack of urgency in both chambers as growing swaths of the government run out of their rainy-day funds.

Rep. Mark Meadows (R-N.C.), the head of the hard-line House Freedom Caucus who is close to Trump, predicted Thursday that the standoff would last for several more weeks.

“I think there’s a very good possibility that this could be the longest shutdown that we’ve had in the history of Congress,” Meadows said. The current record is 21 days, which was set in 1996 during another period of fiercely divided government.

For some, a shutdown at the start of the new Congress is just more of the same.

“Things have gotten so off-track around here in the last couple of years, you know in the last three or four years, it’s just become a course of events,” said Sen. Marco Rubio (R-Fla.). “It’s our third shutdown since I’ve been here.”

Source: https://www.politico.com/story/2019/01/03/government-shutdown-116th-congress-1080393
Droolin’ Dog sniffed out this story and shared it with you.
The Article Was Written/Published By: mlevine@politico.com (Marianne LeVine)