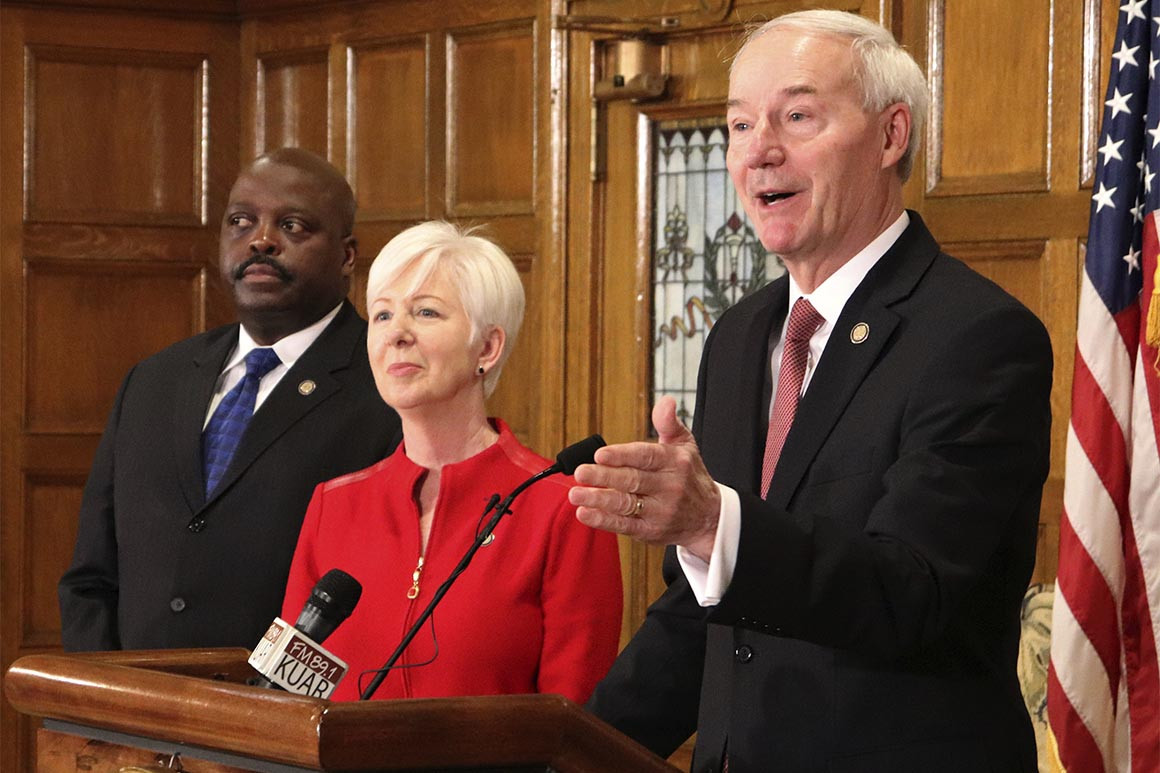 CABOT, Ark. — Arkansas is throwing thousands of people off its Medicaid rolls each month for not complying with work requirements, blindsiding vulnerable residents panicked about losing their health coverage.

Views differ on the fairness of the unprecedented social experiment, but there’s unanimity here that it’s causing confusion. And that’s feeding a philosophical debate about whether low-income adults are ducking the work rules or just can’t navigate the tech-heavy reporting system that goes offline every night at 9 p.m.

Republican Gov. Asa Hutchinson defended the program, saying it provides the help residents need to become independent. “These are not people that didn’t want to work,” he said in an interview. “It’s just they might not have had the training they needed, or they didn’t have a job opportunity and they needed additional assistance. And that’s what the objective is of the program.”

The state has removed more than 16,000 low-income adults for failing to log at least 80 hours of work, job training, volunteering or similar activity — including 4,655 in November.

Some of the people thrown off the program describe a nightmarish, confusing experience with clunky technology and no one to help them. Individuals who don’t adhere to the new rules for three months get removed from Medicaid for the rest of the year.

“I have pre-existing conditions. But all they could tell me was, ‘sorry, you didn’t comply,’” said Jamie Deyo, who lost coverage and suffers from rheumatoid arthritis and back problems stemming from a 2013 car accident. “It just was a slap in the face.”

Deyo is one of nine Arkansas Medicaid enrollees who sued the Trump administration in August to block the rules. She said a state letter notifying her about the work requirements was sent to the wrong address, leaving her completely unaware of the new terms. After losing coverage, the 38-year-old was unable to go to physical therapy or see her doctor to schedule surgery to repair a broken screw in her back. She’s also had to pay more for medication.

The Trump administration is using work rules to cut enrollment in the safety net program after the Affordable Care Act expanded it to millions of able-bodied low-income adults. Arkansas — which imposed rules in June on certain enrollees age 30 to 49 and plans to expand them in January to those age 19 to 29 — provides the first real-time results of the GOP’s push to reshape the entitlement.

The Trump administration has approved similar rules in Indiana, Kentucky, New Hampshire and Wisconsin, but they haven’t taken effect yet; Kentucky’s have been stalled by a lawsuit from advocates of the poor.

Arkansas officials are belatedly making accommodations for people in a poor state with limited internet access after national backlash from health care advocates, including a new phone line for enrollees to report their hours.

Online reporting kiosks have also been available at county offices. But the state has not hired additional workers to help Medicaid enrollees navigate the new rules, despite the high stakes for non-compliance.

Only 1,428 low-income adults required to report their hours in November logged at least 80 hours. Roughly 8,400 failed to report 80 hours, with 98 percent of them not reporting any work activities, according to statistics from the Arkansas Department of Human Services.

Arkansas’ Medicaid experiment has drawn ire from Democrats across the country as well as from a panel of Medicaid experts that advises Congress, which in November asked HHS Secretary Alex Azar to stop the state from dropping people until outreach efforts are improved.

Racheal Holmes said she lost her benefits at the end of October despite going to a Department of Human Services office in Little Rock once a month to log her hours.

Holmes, who had been working at a grocery store, said it took hours just to log in to the online reporting system the first time. A state worker offered help only after a security guard noticed she was still at the office after several hours, she said.

“You couldn’t get basic assistance, as though it’s a way for you to fail,” said Holmes, who is currently unemployed and has been unable to afford medication to treat high blood pressure since her coverage lapsed. She doesn’t think the work requirements are unfair but asks, “Where’s the assistance?”

Arkansas officials point to what they describe as promising signs the requirements are working but haven’t finalized plans to see if the project is achieving its goals of helping individuals find work and improving their health.

More than 3,800 Medicaid enrollees who were subject to the work rules have found jobs since June, although it’s unclear how many of them were motivated specifically by the new requirements.

Hutchinson scoffed at critics who say the state isn’t doing enough, citing examples such as the Department of Human Services making more than 155,000 phone calls to educate enrollees about the rules. The state is also planning a new advertising campaign.

“You could show that it was 100 percent successful in every way and they would still criticize it, because they don’t believe that any responsibility should have to accompany a social benefit such as Medicaid,” Hutchinson said. “The criticism is based upon myths and misunderstandings and a totally different philosophy.”

Hutchinson fought with legislators in his own party to continue the Medicaid expansion his Democratic predecessor began under Obamacare, which now covers more than 230,000 people. The governor maintains that the work requirements are a needed conservative counterweight to the health law’s coverage expansion in a red state where there’s little desire to enlarge the social safety net.

A supermajority of three-fourths of the Arkansas House and Senate is required to approve funding for Medicaid expansion population each year, leading to almost annual cliffhanger votes.

Hutchinson’s push to institute conservative changes has given Democrats and advocates for the poor heartburn, with critics arguing Medicaid was never intended to be a jobs program. Conservatives disagree.

“It is reasonable and expected in the United States of America and especially here in conservative Arkansas that people who are able to work will do so,” said state Sen. Jason Rapert. “It is not acceptable for people to think they are entitled for other taxpayers to pay for services for them just because they do not want to work. That is not individual responsibility.”

In an interview earlier this month, Rapert said he hadn’t heard a single complaint from constituents subject to the work requirements.

But residents tell other stories. Casey Copeland, a 37-year-old who struggled with depression and drug addiction following the death of his father, said he’s only able to comply with the rules by volunteering in the community and relying on financial support from his family.

“If my mom didn’t support me on the financial stuff I couldn’t do all of it,” he said in an interview at Canvas Community Church in Little Rock, which holds a weekly dinner-and-a-movie gathering for the homeless.

Copeland was able to report his hours online using a computer at home but said the process was “very confusing.”

Department of Human Services Director Cindy Gillespie said officials are looking at the program “continuously” to see how it can be improved for enrollees.

“We’re trying to help them get to a lot of the things that exist in this state,” she said. “We’re trying not to really be fixated on what everybody else is saying outside Arkansas about the program.”

That’s not much consolation for Deyo, who’s figuring out how to deal with her infirmities in the new landscape.

“I have the doctors‘ notes that say I can’t work, I have their signatures,” she said. “Nobody wanted to hear that from me.

Source: https://www.politico.com/story/2018/12/30/conservative-health-care-experiment-leads-to-thousands-losing-coverage-1076876
Droolin’ Dog sniffed out this story and shared it with you.
The Article Was Written/Published By: rpradhan@politico.com (Rachana Pradhan)