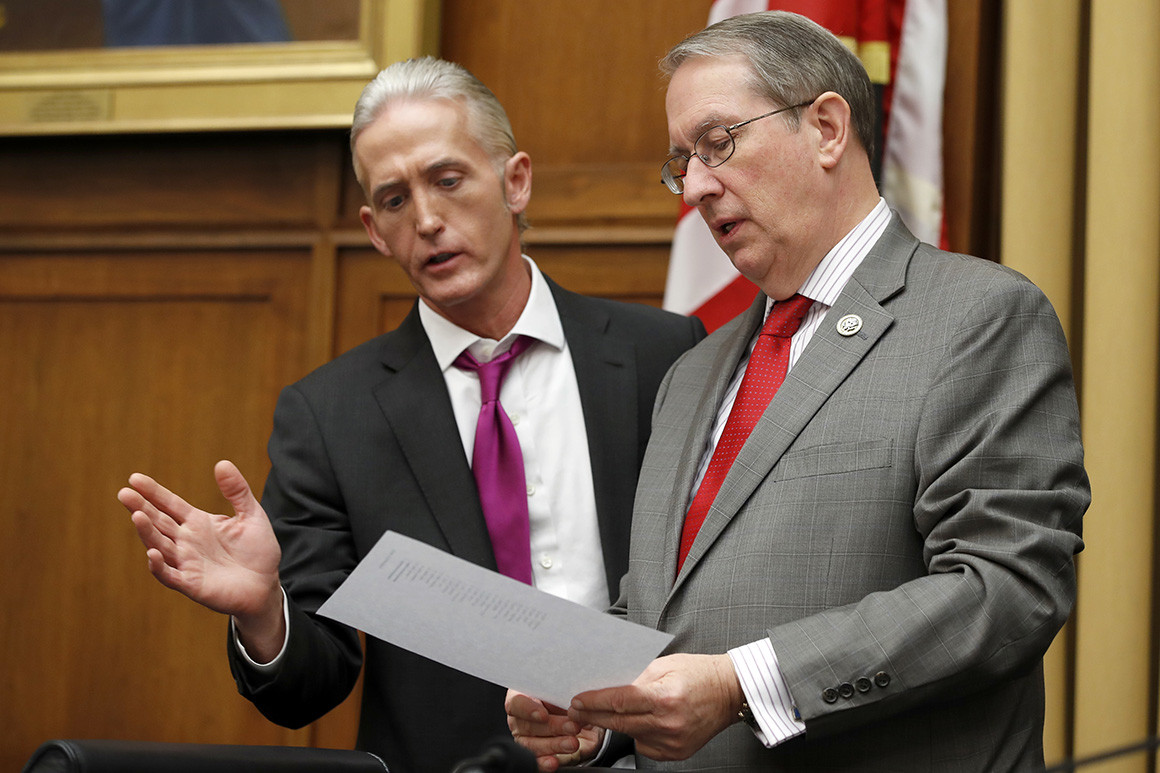 Two senior House Republicans on Friday said they are closing their investigation into the FBI’s handling of its probes into both Hillary Clinton and Donald Trump during the 2016 presidential campaign, issuing few new revelations but urging the continuation of their work when Democrats take the majority in January.

In a letter to top Justice Department officials, including acting Attorney General Matthew Whitaker, House Judiciary Chairman Bob Goodlatte and House Oversight Chairman Trey Gowdy wrote: “We invite your attention to the transcripts of witness testimony and we encourage you to continue to investigate these matters, consistent with your jurisdiction, so the final definitive accounting can be made to the American people.”

The letter contained little new information beyond what was already in the public realm, and Democrats in the House have said they intend to call off the investigation, contending it’s a partisan effort meant to undermine the ongoing Russia probe.

Goodlatte and Gowdy’s committees have been conducting a joint probe into the FBI’s handling of its investigations into Clinton’s private email server and the bureau’s counterintelligence investigation into Trump, which in part resulted in the appointment of special counsel Robert Mueller after Trump fired then FBI Director James Comey in May 2017.

In their seven-page summary, the two Republican chairmen reiterate their call, first made in the spring, for an additional special counsel to be appointed to look into the investigations of the candidates. Former Attorney General Jeff Sessions rebuffed such a move, but he did appoint an independent U.S. attorney to review the investigations.

The department’s watchdog also released a report into the bureau’s actions, in particular examining whether private anti-Trump messages exchanged by key figures like then-agent Peter Strzok and attorney Lisa Page had any effect on the bureau’s investigation into his campaign.

President Donald Trump and his conservative allies seized on the Strzok and Page’s private texts as evidence of pro-Democratic bias. Inspector General Michael Horowitz was severely critical of Comey’s actions as FBI director alongside Strzok and Page’s conduct, but Horowitz found no evidence political bias played a role in decision-making at the bureau.

As for the Clinton probe, Goodlatte and Gowdy reiterate their criticisms of the investigation: Comey and top agents were too lenient in their interpretation of the law; the possibility that a foreign actor did access one of her messages, some of which were later found to contain classified material; and that President Barack Obama’s exchanges of emails with Clinton were downplayed.

Both Goodlatte and Gowdy are retiring after the 115th Congress ends this year. The results of the midterm elections mean Democrats Rep. Jerry Nadler (N.Y.) and Elijah Cummings (D-Md.) are expected to take over their respective committees.

Both Nadler and Cummings are copied on the letter, although the future of the investigation will likely rest with Senate Republicans like Sen. Lindsey Graham (R-S.C.), who will take over the Senate Judiciary Committee, and Sen. Ron Johnson (R-Wisc.), who is expected to remain chairman of the Senate’s Homeland Security and Governmental Affairs Committee. Graham has previously echoed calls for a special counsel to be appointed to examine the FBI’s handling of the Clinton probe.

Part of the reason they have not been able to answer some of their questions, Goodlatte and Gowdy contend, is that the federal government, especially the FBI, has slow-walked their requests for documents. The bureau has repeatedly rejected these claims and has tussled with Hill Republicans on the issue. Trump has ordered some of the requested documents to be declassified, but that process is still ongoing.

Kyle Cheney contributed to this report

Source: https://www.politico.com/story/2018/12/28/house-republicans-justice-department-fbi-clinton-trump-probe-1076869
Droolin’ Dog sniffed out this story and shared it with you.
The Article Was Written/Published By: bgriffiths@politico.com (Brent D. Griffiths)