For years, the RIAA and MPAA have pointed to the millions upon millions of takedown notices sent to Google as “evidence” that the DMCA notice-and-takedown process doesn’t work. You can find lots of examples of this, but here’s an MPAA VP making this exact point:

“The large volume of removal requests cited in Google’s Transparency Report clearly illustrates the magnitude of the piracy problem and the ineffectiveness of the ‘notice and take down’ system,” said Chris Ortman, MPAA VP of corporate communications. “If this system were working, the numbers would be going down — not up.”

But here’s the thing about that quote: it’s almost entirely bullshit. First off, the numbers have started going down, but you don’t suddenly hear Chris Ortman and the MPAA saying “look, the notice and takedown system is now working!” Because Ortman wasn’t being honest when he made the original statement.

And back to that point about many requests not even being in Google’s index. As Google’s Transparency Report shows, many of those top removal requesters keep requesting links that Google doesn’t even have. The 2nd largest requester, for example, is APDIF Mexico. It submitted over a quarter of a billion takedowns. But do those mean anything? Well, let’s take a look at its most recent batch of requests:

So… look at that last column. A huge percentage of the URLs were not even in the index. Then look at the column to the left of that. Google removed none of the links requested. Obviously, it can’t remove the non-indexed ones, but it appears that even when they were in Google’s index, they were deemed non-infringing or, in some cases, duplicates to URLs that had already been received in earlier takedowns. In other words, counting up the number of requests is meaningless when organizations can and do submit URLs that aren’t even in Google and when they simply repeat URLs that had already been requested. Anyone could simply re-request the same URL a billion times and it wouldn’t say a damn thing about whether the notice-and-takedown system is working.

Or, if you think it’s unfair to pick on APDIF Mexico — an organization many of you have never heard of — why not look at the RIAA? Of all of the latest requests from the RIAA, I noticed that, once again, it shows no removals by Google. Why? Because the RIAA is submitting duplicates of URLs already removed. This is literally the result of their latest request from earlier today according to Google: 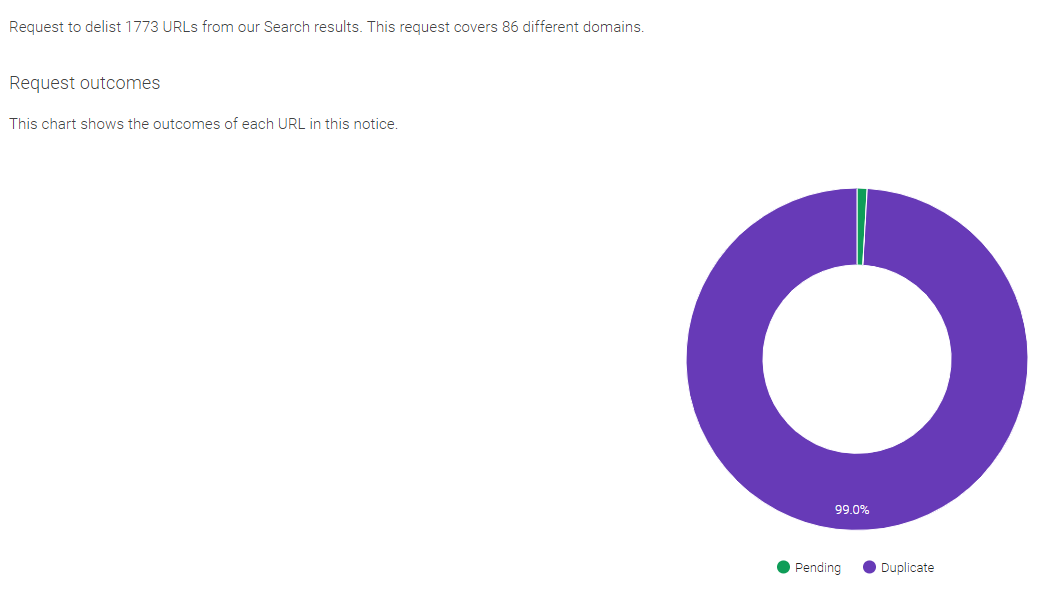 If you can’t see that, it shows that 99% of the URLs submitted are duplicates, and the other 1% is still “pending” meaning they might also be duplicates. When the RIAA is submitting links that have already been removed, it kinda makes you wonder if the RIAA and groups like it are simply padding their own numbers to later try to make a bullshit point about how many “takedown requests” Google receives. It certainly highlights the fact that the RIAA does not actually check to see if what they’re submitting to Google is actually in Google.

Anyway, the next time you hear the likes of the RIAA or MPAA claiming that the DMCA notice-and-takedown safe harbors aren’t working because of the number of takedowns, you can safely note that they are being dishonest.

Source: https://www.techdirt.com/articles/20181227/10311341298/millions-upon-millions-takedown-notices-to-google-links-that-arent-even-google.shtml
Droolin’ Dog sniffed out this story and shared it with you.
The Article Was Written/Published By: Mike Masnick