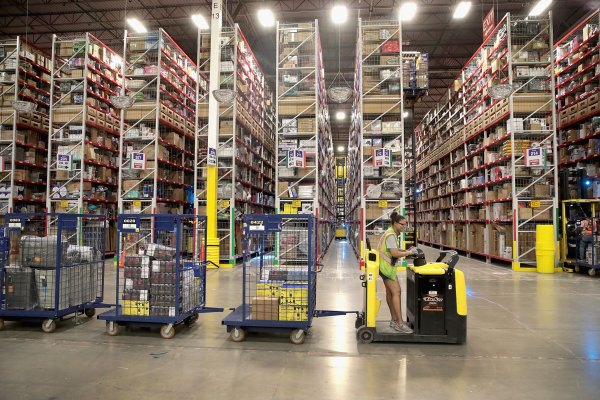 Amazon had another record-breaking holiday season, the retailer announced this morning. The company says it added “tens of millions” of people who signed up for Prime memberships, both paid and on a trial basis. Its worldwide customers also shopped and ordered more items than ever before, including “millions more Amazon devices” compared with this time last year. The device best-sellers, as on Black Friday, again included Amazon Echo speakers and Fire TV.

Specifically, Amazon said its top devices sold over the holidays were the Echo Dot, Fire TV Stick 4K and the Echo.

The lower-cost Echo Dot has consistently been an Amazon top seller thanks to its lower price point and Amazon’s hefty discounts that help push undecided shoppers into impulse buys.

Over Black Friday weekend this year, for example, Amazon’s Echo Dot became the No. 1 selling product across Amazon from any manufacturer, not just Amazon’s own best-selling device. That speaks to Amazon’s ability to leverage its retail site to push its own hardware — a potential competitive advantage as the smart speaker markets heats up between companies like Google, Apple and Chinese manufacturers like Alibaba and Xiaomi.

In the U.S., Amazon currently leads the smart speaker install base, but internationally it’s losing ground to Google and others.

The retailer doesn’t share its sales numbers, but often announces new records have been set. To some extent, these continual “record-breaking” sales can be attributed to Amazon’s expansion of Prime, which most recently became available in Australia, Singapore, Netherlands and Luxembourg, in addition to the U.S., U.K., Spain, Mexico, Japan, India, Italy, Germany, France, China, Canada, Belgium and Austria. More Prime memberships, simply put, will translate into more Amazon sales.

That’s why Amazon’s larger goal is not just serving online shoppers as any other e-commerce site does, but wooing these shoppers with other services — like Prime Video, Prime Music, free e-books and more — to become Prime subscribers. This holiday season, the retailer said that tens of millions of U.S. and international customers signed up for trial and paid Prime memberships.

Though Amazon had traditionally kept the number of Prime members under wraps, this April it finally announced having hit the milestone of more than 100 million paid Prime members. Some analysts now expect that number will continue to grow at a rapid pace — as much as 35 to 40 percent per year. Over the next decade, Citigroup predicts Prime subscribers will reach 275 million.

A large part of Amazon’s Prime strategy today is its ability to reliably ship products on ever-tighter time frames. Over the holidays, for example, Amazon was offering up to Christmas Eve delivery in select markets where its same-day delivery service Prime Now is available.

Amazon shares were up this morning as a result of its holiday sales announcement.

Source: https://techcrunch.com/2018/12/26/amazon-announces-a-record-breaking-holiday-tens-of-millions-of-new-prime-subscribers/?utm_source=feedburner&utm_medium=feed&utm_campaign=Feed%3A+Techcrunch+%28TechCrunch%29
Droolin’ Dog sniffed out this story and shared it with you.
The Article Was Written/Published By: Sarah Perez