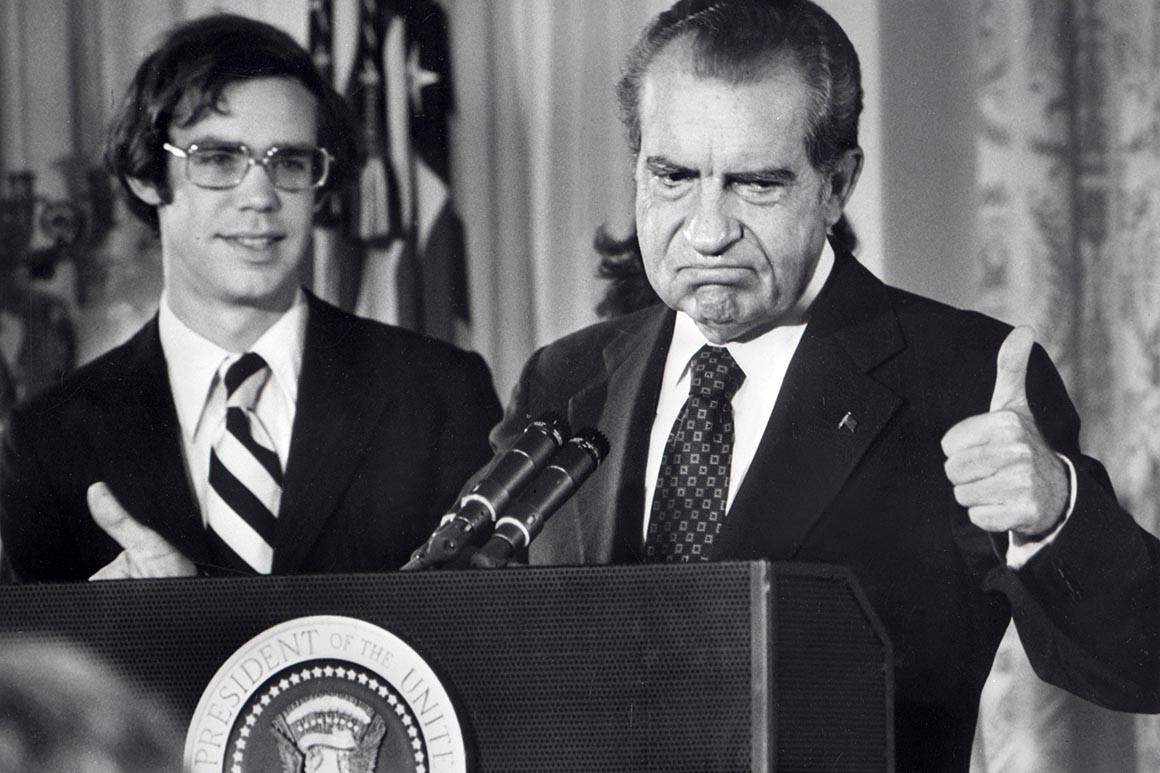 Questions were mounting over the president’s taxes.

A drip, drip, drip of news reports stretching out over months suggested he had seriously underpaid his taxes.

The mostly forgotten story of Nixon’s tax troubles, long overshadowed by the simultaneous Watergate scandal, is now getting a new look from lawmakers and legal experts.

That’s because Democrats want to tap a rarely used law to seize and release Trump’s tax returns when they take control of the House next year.

“The president should have to tell the American people what, in God’s name, he is doing with his money,” said Rep. Bill Pascrell (D-N.J.), a senior Democrat on the House tax-writing committee. “The law is on our side.”

The law is clear, experts say, that the president is supposed to turn over his returns if they’re demanded by the chairman of the tax committees, who may examine them with colleagues in private.

It’s fuzzier though how lawmakers can make those returns publicly available — which is crucial to Democrats’ plans.

Disclosing confidential tax information is a felony. If Democrats can’t release Trump’s returns publicly, then they can’t discuss anything they see in them without putting themselves in legal jeopardy.

A similar issue came up in the controversy over Nixon’s taxes, which some say gives Democrats a precedent to release Trump’s returns.

“From a legal standpoint, I think they have a strong case,” said George Yin, a former head of the Joint Committee on Taxation who has written extensively about the issue. “It’s a good precedent.”

The 1973 allegations against Nixon mirror those that have been leveled against Trump: grossly underpaying what he owed the government.

Nixon’s tax troubles began with an unrelated lawsuit stemming from the Watergate break-in.

At the time, presidents did not routinely release their tax returns, so his finances were a mystery. But the court case referred to Nixon donating his papers, and public figures like the president were allowed to take charitable deductions for donating their papers to the government or universities.

Congress, though, slashed the break for gifts beginning on July 25, 1969. The Washington Post began a series of reports in 1973 questioning whether Nixon donated his papers in time to qualify for the old deduction. His administration confirmed the president’s deduction had totaled more than $500,000.

A second controversy erupted later that summer when the New York Times reported questions over whether Nixon owed capital gains taxes on a land deal in California.

Hoping to clear the air, Nixon agreed to publicly release his returns covering the years 1969 through 1972. “The confidentiality of my private finances is far less important to me than the confidence of the American people in the integrity of the president,” he said in December 1973.

He asked the Joint Committee on Taxation — Congress’s in-house office of nonpartisan tax experts — to examine his finances, and agreed to pay whatever JCT thought he still owed. At the time, many did not trust the IRS to adequately vet Nixon’s returns since agency officials ultimately reported to the White House.

This is where some tax experts question how much of a precedent the Nixon episode is for House Democrats hoping to unmask Trump’s returns.

Unlike Nixon, Trump has refused to release his returns and he isn’t asking for an investigation. “Nixon voluntarily gave his returns — that’s why I find this different,” said one expert, speaking on condition of anonymity.

Some say a better precedent came during Republicans’ Obama-era investigations into whether the IRS discriminated against conservative groups seeking tax-exempt status. As part of those inquiries, Republicans used the law to make public protected tax information about those organizations.

For the JCT, auditing Nixon’s returns proved a huge undertaking, though it would likely pale in comparison to an investigation of Trump’s finances, given his myriad business interests.

Nixon’s finances were not particularly complicated, but the agency needed four months to examine his returns, during which time it conducted approximately 30 interviews, including with top aides H.R. Haldeman and John Dean and Nixon’s friend Bebe Rebozo.

In April 1974, JCT produced a 1,000-page report that found almost a dozen problems with Nixon’s returns. The agency said he owed $475,431 including interest for unpaid taxes over four years. It amounted to half of Nixon’s net worth.

The IRS simultaneously did its own audit of Nixon and came to a similar finding, determining he owed $432,787.

Though Nixon had voluntarily released his returns, Yin says the JCT report included additional private information about his finances that normally would have been illegal to disclose.

Lawmakers made that public under the law Democrats now want to tap.

“There is a provision of law in the Internal Revenue Code which says that the committee cannot release information obtained with respect to a taxpayers’ return until a report has been filed with the Congress,” then-Ways and Means Committee Chairman Wilbur Mills said in 1974, in releasing the report on Nixon. “We are proceeding to abide by that provision of law, by now filing the report with the House, so it can subsequently be released to the public.”

He added that lawmakers were releasing the report even before they read it because they were concerned leaks could land them in legal trouble.

“If two people know anything here in Washington, it is no longer a secret,” said Mills.

An anonymous White House aide told the New York Times that month that Nixon’s tax bill was so large that he would have to borrow to cover it.

“The president did receive a blanket pardon” from his successor, Gerald Ford, Thorndike noted.

As for the IRS agent who leaked Nixon’s returns, he was discovered and forced to quit, though the administration decided against prosecuting the unnamed official. “Investigators solved the mystery by tracing photocopies of the Nixon tax records to the machine which produced them at the IRS national computer center in Martinsburg, W.Va.,” the Post reported in January 1974.

The reporter who received the leaked tax returns, Jack White, won the Pulitzer Prize that year.

And Nixon, however inadvertently, began a tradition of presidents releasing details of their taxes that every executive has since followed — until Trump.

Source: https://www.politico.com/story/2018/12/23/nixon-trump-tax-returns-1050587
Droolin’ Dog sniffed out this story and shared it with you.
The Article Was Written/Published By: bfaler@politico.com (Brian Faler)