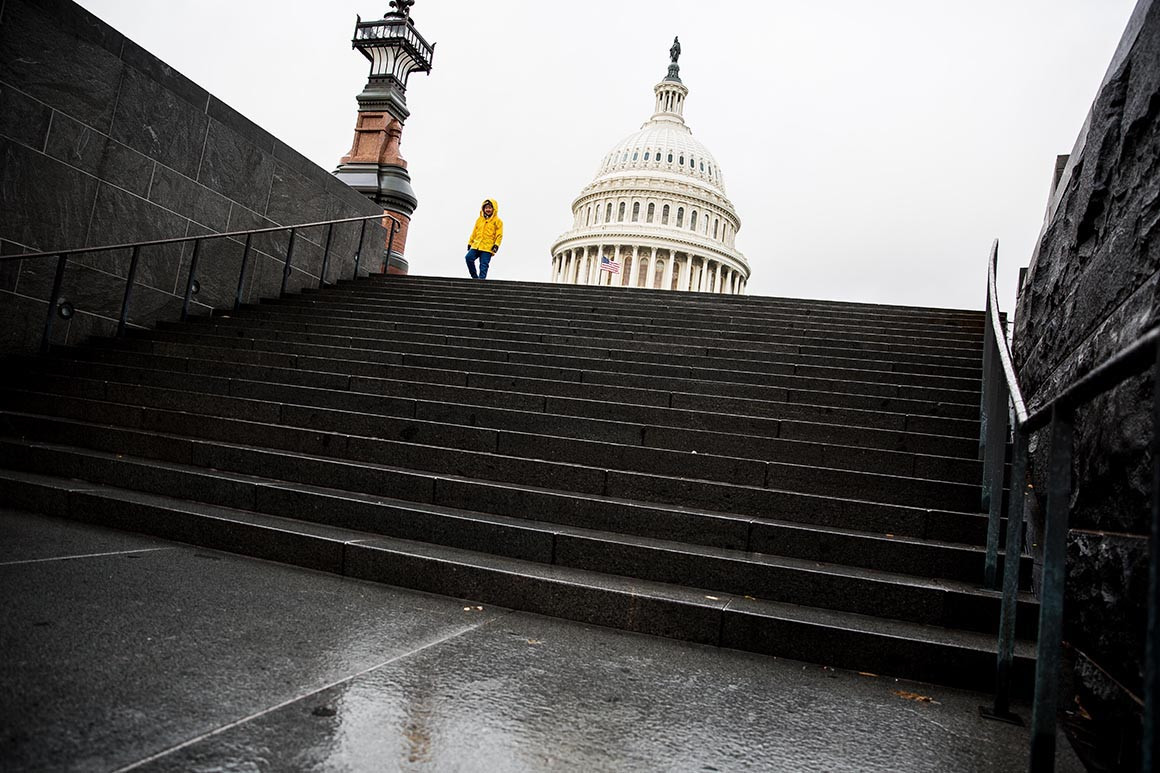 Federal workers woke up to to a partial government shutdown Saturday that could last through Christmas or even the New Year, according to multiple congressional sources, despite the appearance of progress towards a deal late Friday.

The gloomy outlook comes as one-quarter of the government entered shutdown mode at midnight, including nine Cabinet departments, several major agencies and roughly 800,000 federal workers who are impacted by the lapse in funding.

Trump canceled plans to fly to his Mar-A-Lago resort Saturday, with it unclear if or when the president will join his family in Florida for the holidays. But the Capitol was largely quiet, with no meetings among House and Senate leaders scheduled and most lawmakers gone.

“I don’t think we see anything major happening until after Christmas,” said one senior Republican aide. “Maybe on the 26th or 27th, we start seeing movement again.”

The onus, congressional aides in both parties said, is on the Senate to find a way forward. Republicans in the upper chamber need nine Democrats to clear the 60-vote threshold to re-open the government, so Senate Majority Leader Mitch McConnell (R-Ky.) and Minority Leader Chuck Schumer (D-N.Y.) — in tandem with Trump — would have to make some sort of deal.

While the Big Four — McConnell, Schumer, Speaker Paul Ryan (R-Wis.) and House Minority Leader Nancy Pelosi (D-Calif.) — have to sign off on any agreement, several sources said the package first must be publicly blessed by Trump, who has waffled several times in the negotiations over the last two weeks.

The outgoing House majority is intent on not disappointing the president. Ousted House Rules Committee Chairman Pete Sessions (R-Texas) told reporters on Saturday that the president simply should not accept less than $5 billion for the wall and take his message to the American people to build political support for his position.

“I honestly believe that we can and must get the wall,” said Sessions as he wheeled his luggage through an empty Capitol. “I was asked personally that I would not vote for anything that does not fund the wall.”

Congressional leaders were still in town Saturday and some senior staff were in their offices, but there seems to be little urgency to break the stalemate right now after a last minute round of negotiations ended Friday night without a deal.

One senior Republican aide predicted that if a compromise doesn’t materialize in the next 24 hours, it’s likely Congress won’t reach a deal until the New Year, when Democrats take over the House and Pelosi is elected speaker.

Vice President Mike Pence, acting White House chief of staff Mick Mulvaney and Jared Kushner, Trump’s son-in-law and adviser, tried to reach an agreement with Schumer in a last minute round of negotiations Friday afternoon and evening but the talks ultimately proved futile.

Pence, Mulvaney and Kushner essentially offered Schumer a package that would include $1.6 billion in funding for a border barrier, but no money for new construction. Schumer did not agree and has instead stuck to his guns on flat funding for the Department of Homeland Security at $1.3 billion for fencing.

What exactly to call border security funding remains a point of contention.

“I talked to four Democrats [Friday] that said: ‘Look, if you just stop calling it the wall, we’re in,’” said Sen. David Perdue (R-Ga.).

Meanwhile Trump and his conservative allies continue to publicly insist that Congress provide at least $5 billion for his border wall, as outlined in a funding bill that passed the House along a party-line vote on Thursday.

On the House side, leaders gave members the green light to fly home for the holidays, doubtful that any deal would come together before late next week.

Most senators have also gone home and will be given notice to come back if there’s a roll call vote. But that might not be necessary: many in the Senate believe they could voice vote any deal if the president signs off and avoid dragging back all 100 senators from across the country for a roll call vote.

As the shutdown went into effect Saturday, Trump and Democratic leaders started pointing fingers at each other over who was to blame.

Trump implored Democrats to “give us their votes” in a video posted on Twitter late Friday. Schumer and Pelosi shot back, attributing the stalemate to Trump throwing a “temper tantrum” over billions of dollars in wall funding that Democrats were never going to agree to anyway.

Both sides are eager to make it appear the other has caved, so any deal would have to be both spun to conservatives as a win for the president and to liberals as a cave by the White House.

Republicans have also talked about adding hundreds of millions of dollars more for border security, though Democrats have resisted that as well.

The Washington exodus comes despite the fact that 800,000 federal employees, including border patrol and TSA agents, are set to be furloughed or forced to work without pay over the holidays. While three-quarters of the government is already funded, nine federal departments and several major agencies, including NASA, the Food and Drug Administration and the IRS, are affected.

Federal workers deemed “essential,” including TSA agents, began receiving notices late Friday that they were required to work during the shutdown.

“During a lapse in funding all leave is canceled,” read one notice sent to TSA agents just before midnight on Friday. “If you choose to take leave, scheduled or unscheduled, you will be placed in a furlough status. If funding is restored, you may only be paid for hours worked.”

One senior Republican source argued that these employees’ next paycheck is actually already set to be processed, so they won’t lose money for several weeks.

The first furloughed paycheck for federal workers isn’t set to be processed until Jan. 11, this source said. That, in part, has relieved the pressure lawmakers feel to move quickly.

The Senate advanced the House-passed bill on Friday afternoon but did not take a vote on the Democratic filibuster, which would have failed and made it more difficult for Congress to move something more quickly. Party leaders and Sens. Doug Jones (D-Ala.), Jeff Flake (R-Ariz.) and Bob Corker (R-Tenn.) agreed to move forward but hold no more vote until there’s a deal, an apparent stalemate but also a procedural move that avoids unpredictable amendment votes with more Senate Democrats in town than Republicans.

Meanwhile, frustration abounds in congressional GOP leadership at how quickly things unraveled in the past 48 hours. They thought they had a plan to delay Trump’s border wall fight for several weeks. But the conservative Freedom Caucus, they say, has once again hijacked the party and sent Republicans barreling over a cliff in the final days of GOP hegemony.

Few senior Republicans believe Trump can actually win significant amounts of wall money through this shutdown, though conservatives disagree. Rather, Democrats are likely to play hardball, let the shutdown Trump demanded drag out for days or weeks, then pass legislation to re-open the government — without Trump’s border wall — as one of their first moves upon taking the House Jan. 3.

There’s a sense, however, that Trump does not understand the weakness of his negotiating hand since he keeps getting egged on by conservatives. Indeed, when top White House officials were close to a deal with Schumer on Friday, it was the Freedom Caucus that pushed back on a lower wall number, sources say. GOP leaders know, however, that the group is unlikely to support whatever deal comes together and they feel the White House has wasted its time negotiating with the far right.

Eliana Johnson contributed to this report.

Source: https://www.politico.com/story/2018/12/22/government-shutdown-2018-deal-1074299
Droolin’ Dog sniffed out this story and shared it with you.
The Article Was Written/Published By: rbade@politico.com (Rachael Bade)