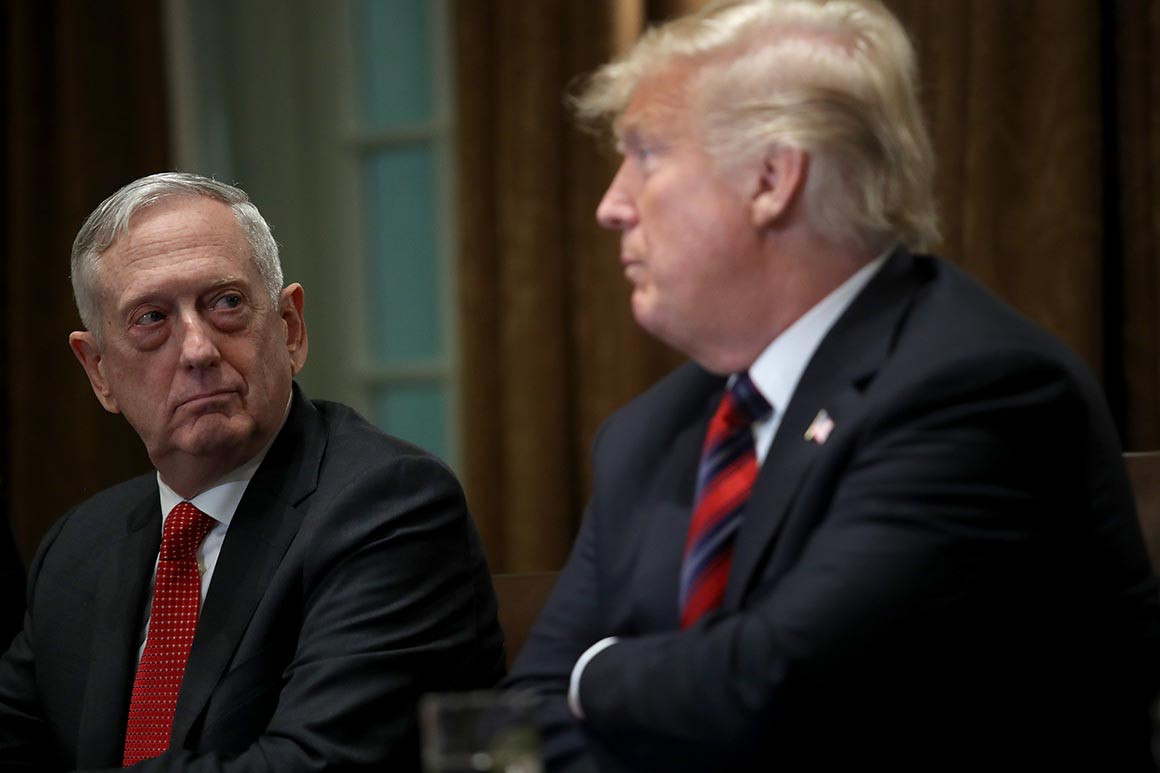 That strategy came to a swift end when it came to Syria.

Trump’s and Mattis’ vocal disagreement on withdrawing U.S. troops from the war-ravaged country was just the latest clash between the president and his Pentagon chief on their approach to deploying the military and projecting American power.

The retired four-star general took advantage of Trump’s early high regard by expanding the defense budget and pushing more authority down to military commanders in the field. He even leveraged Trump’s sometimes-hawkish rhetoric into troop increases in some of the same regions the president is now itching to leave.

But in the end, their differences proved too stark to overcome. These were some of their most significant points of disagreement:

Troops on the border

Mattis’ approach was on full display twice this year when Trump ordered the deployment of military forces to the U.S.-Mexico border in response to the approach of migrant caravans from Central America.

In April, after Trump initially demanded a military deployment, the Pentagon responded by sending 2,100 unarmed National Guardsmen — a move little different from the approaches of former Presidents Barack Obama and George W. Bush.

In October, when Trump ordered a full active-duty deployment, Mattis complied — but on a much smaller scale, and in more modest roles, than the president demanded.

In a tit-for-tat that played out in Trump’s public appearances and Mattis’ quieter media briefings and announcements, the president called for 10,000, then 15,000 troops to fend off a migrant “invasion.” The military sent only about 6,000 troops, many unarmed and serving in support roles to civilian law enforcement. A good number of those troops have since come home.

Even when Trump had White House chief of staff John Kelly authorize the troops to defend Border Patrol agents with deadly force, Mattis suggested he didn’t plan to use the authority.

Mattis also insisted that the order wouldn’t lead to troops firing on migrants, despite Trump’s statement that the feds would respond to anyone throwing rocks as if they had firearms.

The troops are “not even carrying guns, for Christ’s sake,” Mattis told reporters. “Don’t worry about it.”

During Trump’s first summer in office, the president was advocating pulling out of Afghanistan while the military pushed for more troops. But Mattis and then-national security adviser H.R. McMaster managed to shape his decision-making.

Trump ultimately endorsed Mattis’ recommendation to deploy more than 3,000 U.S. reinforcements and embrace an expanded military advisory strategy. In an August 2017 speech announcing his decision, Trump alluded to how established foreign policy figures in his administration had changed his mind, although he did not single out any by name.

“My original instinct was to pull out, and, historically, I like following my instincts,” Trump said in the speech. But “after many meetings, over many months, we held our final meeting last Friday at Camp David with my Cabinet and generals,” he continued, and settled on the Pentagon’s preferred outcome.

Whether Trump now reverts to his original instincts on Afghanistan — and whether Mattis’ successor will go along with it — now loom large over U.S. military strategy.

Trump’s announcement this week of a pullout from Syria was a stark defeat for Mattis. But Mattis’ approach had won him tactical victories on Syria policy in the past — including during deliberations over how to respond to the Assad regime’s chemical weapons attacks against civilians in April. At that time, the Defense secretary was seeking to rein in Trump’s aggressive instincts, not the non-interventionist streak that has been on display this week.

The military’s Central Command drew up five options for military responses, according to a military official involved in the deliberations who described them on condition of anonymity. When Mattis and Joint Chiefs Chairman Gen. Joe Dunford briefed the options to Trump, the official said, Mattis characterized the most restrained option — limited strikes against three targets instead of a broader attack — as more muscular than it really was.

It worked. Trump signed off on the option that Mattis was advocating.

On Iran, Mattis has found himself in the unlikely position of pursuing continuity with policies of a past administration that he chafed at when in uniform.

Mattis repeatedly contradicted Trump by publicly advocating that the U.S. remain a part of the multi-nation, Obama-era deal aimed at restraining Iran’s nuclear ambitions — and testifying that Iran was complying with it. In Syria, where U.S. and Iranian troops are often in close proximity, he resisted White House calls to make countering Iranian influence a formal part of the U.S. strategy, insisting that American troops remain focused on the Islamic State.

It was a contrast to the more hawkish role he had played as a general under Obama, who frequently faced accusations from hawks of being too reluctant to confront Tehran.

Mattis “has to be very sensitive to where the president is,” James Jeffrey told POLITICO earlier this year. Jeffrey, who was Obama’s ambassador to Iraq when Mattis headed Central Command and now serves as the Trump administration’s special envoy for negotiations in Syria, said, “With Obama, he had a president who was very reticent to challenge Iran militarily … so he was forward-leaning, and that probably hurt his relationship with Obama.”

Now, Jeffrey said, Mattis is “dealing with a president who is both extremely aggressive on Iran and very volatile. So he has to be the cautioner, the balance of reason, the ‘look before you leap’ guy. You see him doing this with North Korea, and you see him doing it with Iran.”

When Trump tweeted his order that the military ban transgender personnel, Mattis tried to walk it back but ultimately failed. After the White House followed up the tweet with formal guidance, Mattis ordered a six-month policy review headed by his top deputy and generals from each of the military branches.

While the reviews were underway, the existing Obama-era policies that allowed troops to be open about their transgender status — and in some cases receive government-funded sex-reassignment surgeries — remained in place.

But the review ended with Mattis largely acquiescing to Trump, recommending in a memo to the president that “persons with a history or diagnosis of gender dysphoria” be “disqualified from military service except under limited circumstances.”

Trump followed through in March by formally ordering a ban based on Mattis’ recommendation — although that policy is now being contested in several court cases.

Source: https://www.politico.com/story/2018/12/20/how-mattis-tried-to-contain-trump-1049741
Droolin’ Dog sniffed out this story and shared it with you.
The Article Was Written/Published By: wmorgan@politico.com (Wesley Morgan)