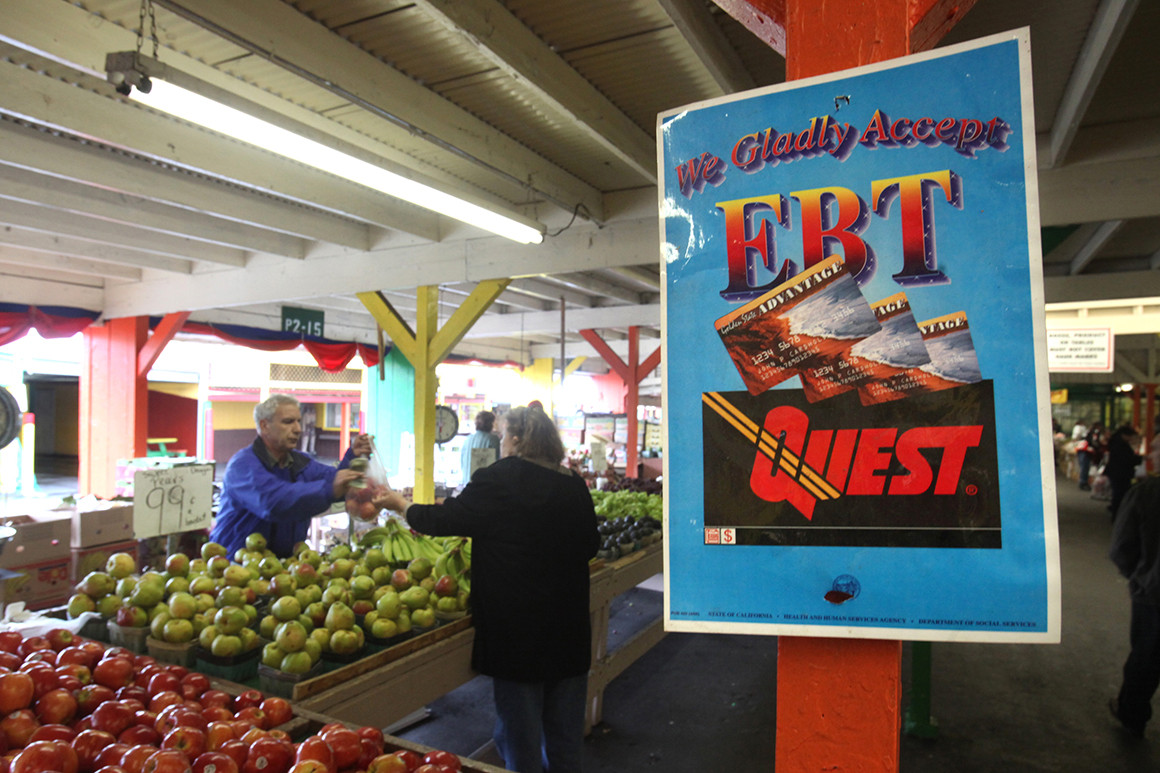 The release of the rule comes on the same day President Donald Trump is expected to sign the farm bill into law — and the timing is no accident.

The proposal, which was initially expected to be released before the midterm elections, is the administration’s response to concessions House Republicans made on food stamps in the final bill. The bill doesn’t mandate stricter work requirements or tighten eligibility criteria for the Supplemental Nutrition Assistance Program, formerly known as food stamps, which accounts for more than three-quarters of farm bill spending.

The White House and Agriculture Secretary Sonny Perdue had backed the House Republican efforts to overhaul SNAP. Trump used his Twitter platform to press for stronger work requirements, even late into conference negotiations, where food stamps were a major sticking point.

Ultimately, the farm bill dispensed with all of the House GOP’s controversial SNAP proposals, and left out an effort by Senate Agriculture leaders that could have blocked USDA’s regulatory action.

USDA’s proposal targets a group of SNAP participants known as able-bodied adults without dependents, or ABAWDs, which includes recipients ages 18 through 49 who are not disabled or caring for children or other dependents. As of 2016, they accounted for a small slice, 3.8 million, of the nearly 40 million Americans who receive SNAP benefits to help them purchase groceries.

Under current law, ABAWDs can’t receive food stamps for longer than three months during a three-year period, unless they are working or enrolled in an education and training program for at least 80 hours a month. However, states can waive this time limit when unemployment is high or there aren’t enough jobs available — an opportunity that was utilized widely during the Great Recession.

“[N]early half of ABAWDs receiving SNAP now live in waived areas, despite the booming economy and low unemployment,” USDA said in a document explaining its proposal. “The department’s view is that waivers are intended to provide temporary relief to the time limit while areas face poor economic conditions and should be used accordingly.”

The proposed rule would tighten the criteria states must meet when applying for waivers from USDA, and it is projected to save an estimated $15 billion over a decade, Brandon Lipps, administrator of USDA’s Food and Nutrition Service, told reporters.

Nearly 74 percent of the ABAWD population, or about 2.8 million people, is not working. That figure is tracked by states, according to the department. An estimated 755,000 of these individuals would lose SNAP benefits over three years if the USDA proposal is implemented. Lipps said the number of areas across the country with waivers would shrink by 75 percent.

Currently, 36 states and territories waive the time limit for at least some portion of their ABAWD population. Seven have statewide exemptions, including Alaska, Louisiana, New Mexico and the District of Columbia.

California, Florida, Texas and New York all have partial waivers. They are the four most populous states and also happen to have the largest ABAWD populations. In 2016, USDA estimated that there were 570,000 ABAWDs receiving SNAP benefits in California.

The proposal makes several major changes to the criteria used to determine whether states or regions qualify for waivers under SNAP. States have a handful of ways to qualify: Their unemployment rate can be above 10 percent, or they can demonstrate that they don’t have enough jobs available.

Lipps said clarity has been lacking in how an insufficiency of jobs in an area is substantiated, and that’s allowed waivers to be approved for states or regions where unemployment is as low as 4 percent. USDA’s plan would set a firm unemployment-rate requirement of 7 percent, Lipps said.

Most states seek waivers for areas where the unemployment rate is 20 percent above the national average. That had been common after the 2008 financial crisis, but unemployment is now near historical lows at 3.7 percent.

USDA’s proposal also would rein in so-called carry-over exemptions. States can exempt up to 15 percent of their caseload from SNAP time limits, a mechanism that can be used to extend eligibility for ABAWDs.

Few states take full advantage of these 15 percent caseload exemptions. States don’t have to use the entirety of these exemptions in one year but can accumulate them indefinitely.

California, for instance, has “stockpiled” 800,000 exemptions, Lipps said. The USDA wants to limit the carry-over allowance to just one year.

Another proposed change would allow states to request waivers only for a one-year period instead of two. Further, USDA wants to ensure partial state waivers are granted only in regions that are “economically tied,” Lipps said, to curb states from “gerrymandering” parts of the state together to meet eligibility criteria.

USDA said the proposal would not affect as many SNAP participants as the House GOP’s farm bill would have. Still, anti-hunger groups are likely to decry the Trump administration’s proposal as too harsh on low-income families.

“I expect the rule will face significant opposition and legal challenges,” Stabenow said. “Administrative changes should not be driven by ideology. I do not support unilateral and unjustified changes that would take food away from families.”

House Agriculture Chairman Mike Conaway (R-Texas) said in a statement that the USDA proposal would ensure that waivers are preserved for communities that truly need them.

“Paired with the farm bill’s modernized [education and training] programming and increased investment, this proposed rule will allow ABAWDs to seek new opportunities and achieve their goals,” Conaway said.

The USDA plans to take comments on the proposal for 60 days.

Source: https://www.politico.com/story/2018/12/20/food-stamp-rules-1045255
Droolin’ Dog sniffed out this story and shared it with you.
The Article Was Written/Published By: cboudreau@politico.com (Catherine Boudreau)