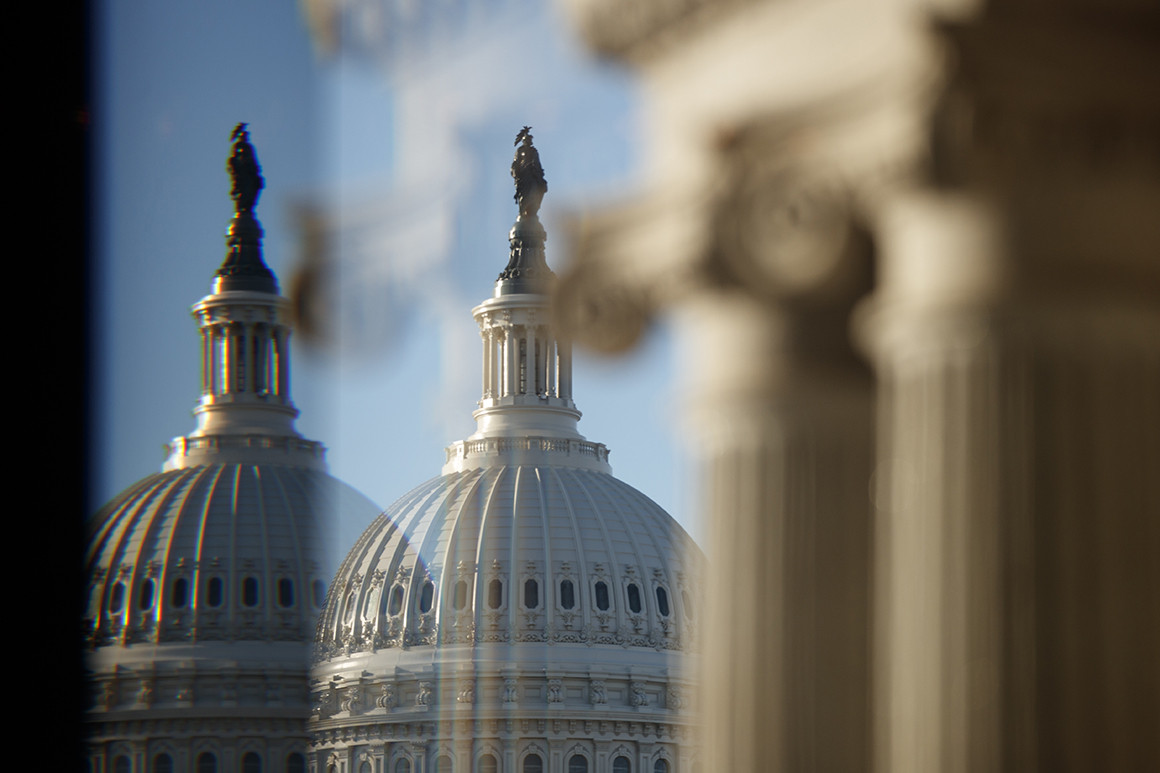 The House Republican caucus was thrown into chaos Thursday as conservatives revolted against a funding bill that includes no new money for President Donald Trump’s border wall.

On the brink of a Christmastime shutdown, House Speaker Paul Ryan is confronting resistance from rank-and-file Republicans, who have begun personally egging on Trump to force a shutdown over the wall.

The odds of a shutdown rose dramatically Thursday as Freedom Caucus leaders Mark Meadows and Jim Jordan headed to the White House for a sit-down with Trump himself. Ryan and his deputies began making plans to put a funding bill on the floor that would deliver $5 billion to the border wall, in an attempt to make good on Trump’s promise in the final days of a GOP-controlled Congress.

White House press secretary Sarah Huckabee Sanders said the president “does not want to go further without border security, which includes steel slats or a wall” and is “weighing his options” amid conservative pressure to oppose the bill.

The issue erupted Thursday during a raucous closed-door meeting. Rank-and-file Republicans pressed leadership to take a harder line against the Senate’s recently passed spending bill by demanding money for the border wall, as well as emergency disaster aid for wildfire and hurricane recoveries.

At one point, Majority Leader Kevin McCarthy told the room that he wanted to put a bill with $5 billion in border wall funding on the floor last week. One Republican yelled out “bulls—!” according to a person in the room.

House GOP leaders are “counting heads” on a package of $5 billion for the wall, to see if they have the GOP votes without any Democrats. They’re also considering adding billions more in disaster funding.

The Senate cleared the stopgap legislation on a voice vote Wednesday night.

One day ahead of the funding deadline, the House’s schedule was uncertain after GOP leaders canceled their regular press conference and instead planned a second meeting with their full Republican conference.

“No guarantees were made in that regard, and some members did ask,” said Rep. Carlos Curbelo (R-Fla.). I think the next few days could get complicated real fast.”

At one point, Speaker Paul Ryan left the room to field a call from Trump himself.

Minutes later, Trump appear to revive his border wall demands, which his own advisers signaled that he was retreating from in an attempt to avert a partial government shutdown on Friday.

“When I begrudgingly signed the Omnibus Bill, I was promised the Wall and Border Security by leadership. Would be done by end of year (NOW). It didn’t happen! We foolishly fight for Border Security for other countries – but not for our beloved U.S.A. Not good!” Trump tweeted Thursday morning.

The House could vote on the bill as soon as Thursday, which was initially expected to have broad bipartisan support.

But the prospect of a swift, drama-free vote was thrown into question Wednesday evening, after a conservative revolt over the border wall and demands for disaster aid created a numbers problem for GOP leaders.

The Senate unanimously cleared the stopgap legislation Wednesday night, a sign of buckling that further inflamed House conservatives who accused their leaders of running away from an immigration fight in their final days of controlling both chambers of Congress.

The Senate, however, remains in session on Thursday, because of the uncertainty surrounding the stopgap bill.

After the vote, House conservatives lashed out on the floor at the prospect of a kick-the-can bill that punts border funding issues into February, when they argue presumptive incoming House Speaker Nancy Pelosi (D-Calif.) will stomp down Trump’s last chance for a wall ahead of 2020.

“Do we actually think we’re going to build a border security wall when Nancy Pelosi is Speaker of the House?” Rep. Jim Jordan (R-Ohio), one of the leaders of the House Freedom Caucus, said Wednesday night as he introduced an 11th hour amendment to add $5 billion in wall funding to the bill. “This is our last best chance,” he said.

With the Freedom Caucus nearly uniformly in opposition, GOP leaders can’t afford to lose other votes if they want a majority of Republicans on board.

Facing backlash ahead of the presumed Thursday vote, the House Rules panel decided just after 1 a.m. to postpone debate on what should happen with the funding bill — instead allowing the full GOP conference to chew over the issue in a closed-door meeting Thursday.

Attendance could also be an issue for House Republican leaders: on Wednesday, there were 44 Republican no-shows in a single vote. Nearly all are Republicans who either lost their reelection or chose not to run next year.

Scores of Democrats are almost certain to support the bill, so its passage would probably not be in jeopardy if put on the floor. But a poor showing among House Republicans would be an embarrassment for Ryan in what could be his final vote — and it could embolden Trump to force the government shutdown that he threatened as recently as last week.

Freedom Caucus chairman Mark Meadows (R-N.C.), along with more than a dozen other conservatives, took the House floor Wednesday night in a series of protest floor speeches seeking more money for the wall.

“My president, we’re going to back you up, if you veto this bill, we’ll be there.” Meadows said on the floor. Hours earlier, he tweeted that a punt into February would be a “Valentine’s Day gift” to Pelosi and her deputies.

The bill does include some money for border fencing: it maintains current spending at a level of $1.3 billion, just shy of the $1.6 billion that the Senate had sought in a funding deal. Trump had initially demanded $5 billion, though he has since appeared to retreat on that figure.

The lack of new money, however, remains a symbolic issue for GOP lawmakers like Byrne, a defense hawk who typically votes for appropriations bills. He’s also an immigration hardliner, and vowed Wednesday to oppose the bill.

The seven-week bill also includes no new money for disaster relief, despite weeks of hopeful statements by GOP spending leaders to supply aid for states like Florida, Georgia and California.

Rep. Austin Scott (R-Ga.) said a group of lawmakers from the Southeast states would oppose any funding bill that didn’t include at least some disaster aid for farmers hit by coastal storms this fall.

“Absolutely not,” Scott said firmly, when asked if he would support the bill in its current form.

“I think there are a lot of people from the Southeast who recognize that this disaster payment for our area has to happen and has to happen now,” Scott said, calling for a specific policy tweak that would unleash extra money for farmers whose crops were wrecked by storms.

“I’m not privy to any conversations with the president … but to the extent that they’re listening, a veto of this bill is something that could be sustained,” Burgess said, hinting that lawmakers could override Trump’s final call.

Rachel Bade contributed to this report.

Source: https://www.politico.com/story/2018/12/20/border-wall-funding-house-1070940
Droolin’ Dog sniffed out this story and shared it with you.
The Article Was Written/Published By: jbresnahan@politico.com (John Bresnahan)