Free-traders inside and outside the White House are now hoping that Trump’s love for new highs on Wall Street will temper his commitment to trade battles and help bring the current fight with China to a soft landing rather than total war next year.

“I think Trump the Dow Jones Man is ultimately going to eat Trump the Tariff Man,” said one former senior administration official intimately familiar with the president’s stock market obsession, citing Trump’s touting of a recent agreement to hold off on increased tariffs after a dinner with Chinese President Xi Jinping. “What he agreed to after that dinner had basically been on the table for two years. He knew he had to give Wall Street something.”

Both markets and Trump are fixated on the Federal Reserve this week, with the central bank expected to raise rates by another quarter point on Wednesday. But no matter what the Fed does, investors early next year will pivot to the showdown between Trump and the Chinese. And pressure from Wall Street could push Trump to cut a deal.

“The question is, what is Trump’s pain threshold? And what is China’s pain threshold? It’s almost like two cars zooming toward each other. Which one is going to turn first?” asked Stephen Moore, visiting fellow at the Heritage Foundation and an outside Trump adviser. “If the stock market fell another 1,000 points it would give him pause. He does love a bull market and hate a bear market. But he also feels this is the fight of our lifetime.”

The tensions between Trump’s commitment to tariffs and his love for a soaring stock market are at the highest of his presidency. After markets soared in 2017, Wall Street hit a wall, with stocks dropping in recent weeks in part on fears that China and the U.S. will not reach an agreement by a March 1 deadline and Trump will slap tariffs as high as 25 percent on everything China exports to the U.S., inviting significant retaliation.

The Dow Jones is now down around 1,000 points, or close to 5 percent, for 2018. The Standard & Poor’s 500 is also lower for the year, as is the Nasdaq, home to tech stocks like Apple that are highly sensitive to tensions with China and potential tariffs. All three indices are now in “correction” territory, meaning a drop of 10 percent from their recent highs. And investors blame trade tension for much of the declines.

“It’s really all about the global economy slowing down, and that’s directly linked to the trade dispute between the world’s largest economy and the world’s second-largest economy,” said Jack Ablin, chief investment officer at Cresset Capital Management. “What market participants thought was just tactics from Trump on China could turn into policy, and if that’s the case then investors are going to be held hostage.” 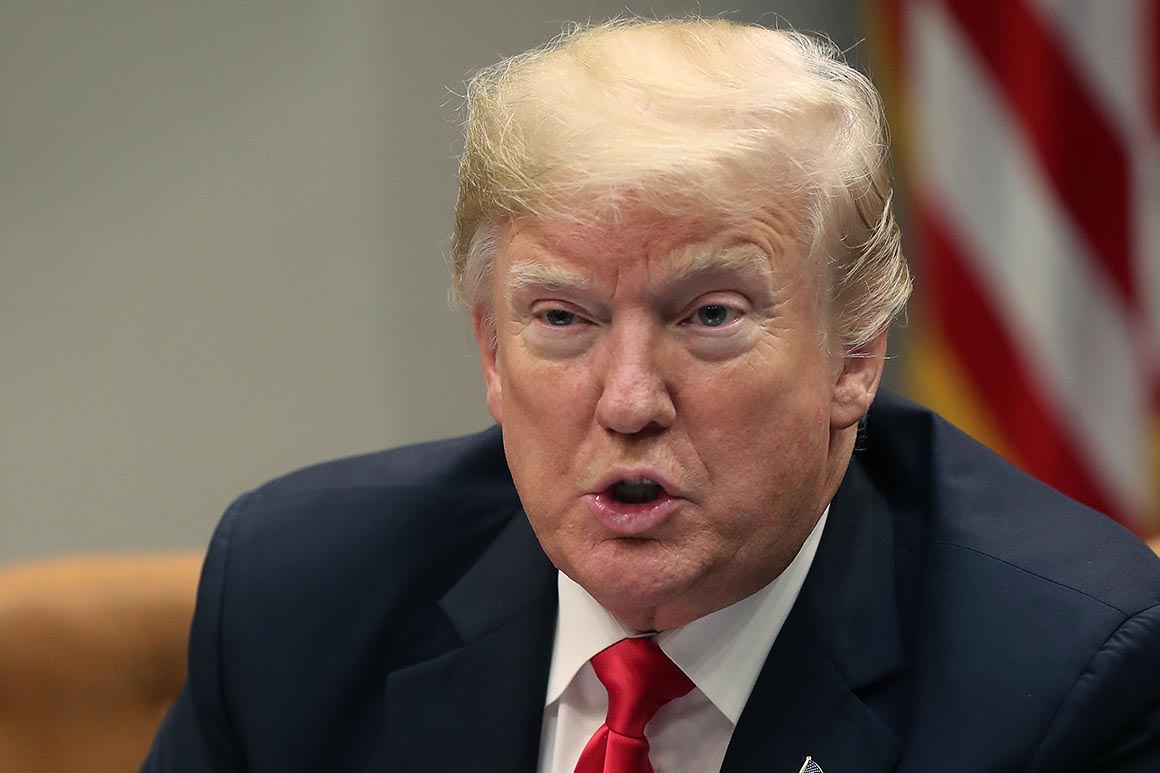 Trump and other senior administration officials, including Treasury Secretary Steven Mnuchin, have long considered the stock market a scorecard on White House performance. Trump has touted a rising market over 30 times on Twitter since taking office. And senior aides say he watches market moves throughout the day on cable news and regularly asks how his potential decisions will impact Wall Street.

“You walk in the Oval and he wants a stock market quote, I give him that,” Larry Kudlow, Trump’s top economic adviser, said in a recent interview. When the market is falling, Trump wants to know precisely why, Kudlow said.

The recent standoff with China has highlighted the tension between Trump’s love for tariffs and his fixation on higher stock prices as a measure of his success. Immediately after the meeting with Xi in Buenos Aires, markets shot higher.

When it became clear that the two sides remained far apart on key issues, and that the White House itself was divided on the path forward, the rally fizzled.

Trump tried to reassure investors on Dec. 3. “President Xi and I have a very strong and personal relationship. He and I are the only two people that can bring about massive and very positive change, on trade and far beyond, between our two great Nations,” he tweeted.

Just a day later, Trump issued one of the biggest market-moving tweets of his presidency, killing much of the post-China meeting rally. “I am a Tariff Man. When people or countries come in to raid the great wealth of our Nation, I want them to pay for the privilege of doing so,” Trump tweeted the morning of Dec. 4. “It will always be the best way to max out our economic power. We are right now taking in $billions in Tariffs. MAKE AMERICA RICH AGAIN.” The Dow closed the day down nearly 300 points.

Trump then issued a series of tweets the following day expressing much more optimism about getting a deal with China, signaling to investors that he cares at least as much about propping up the stock market heading into 2019 and his re-election campaign as he does about truly cracking down on China.

The Trump administration, led by U.S. Trade Representative Robert Lighthizer, is demanding big structural changes from the Chinese on policies ranging from forced transfer of technology to intellectual property theft. China has indicated it is unwilling to give in on some of these areas. That could leave Trump with the options of maintaining a hard line and upsetting Wall Street or taking a more modest deal, declaring victory and potentially setting up a big stock market rally.

Wall Street traders and strategists are counting on Trump’s obsession with the stock market to ensure that the president either accepts some modest concessions or at least decides enough progress has been made to avoid escalating the trade conflict. Because the alternative — a stalemate on March 1 that leads to increased tariffs from the U.S. and retaliation from China — could completely tank an already fragile stock market.

“There is room from the Chinese to yield some ground in terms of open markets and for a negotiated settlement where both sides get to take a victory lap,” said Scott Clemons, chief investment strategist at Brown Brothers Harriman. “There is a risk that Trump could turn back into Tariff Man and prolong this. But it’s one of the few areas where the White House could get a big win in the first half of 2019. And if it goes on it’s really going to start hitting people in the pocketbook.”

Trump advisers inside and outside the White House are counting on the theory of mutually assured destruction to force a deal between the U.S. and China on trade in 2019. Trump wants to avoid further market drops, this theory holds, but the Chinese are also facing a slowing economy and even sharper stock price declines. The Chinese economy remains heavily dependent on exports to the U.S. despite efforts to diversify where it sells goods. So there is strong incentive on both sides to get to yes.

“I’m relatively optimistic that China is going to make concessions and it’s going to happen in the next 70 days, or however many days are left, and this could turn out OK,” Moore said.

“If I were Trump I’d take half a loaf now and let the market go back up, which will help with re-election. And then if he’s re-elected he can come back to it and really get tough.”

Source: https://www.politico.com/story/2018/12/19/trump-stock-market-tariffs-1038383
Droolin’ Dog sniffed out this story and shared it with you.
The Article Was Written/Published By: bwhite@politico.com (Ben White)