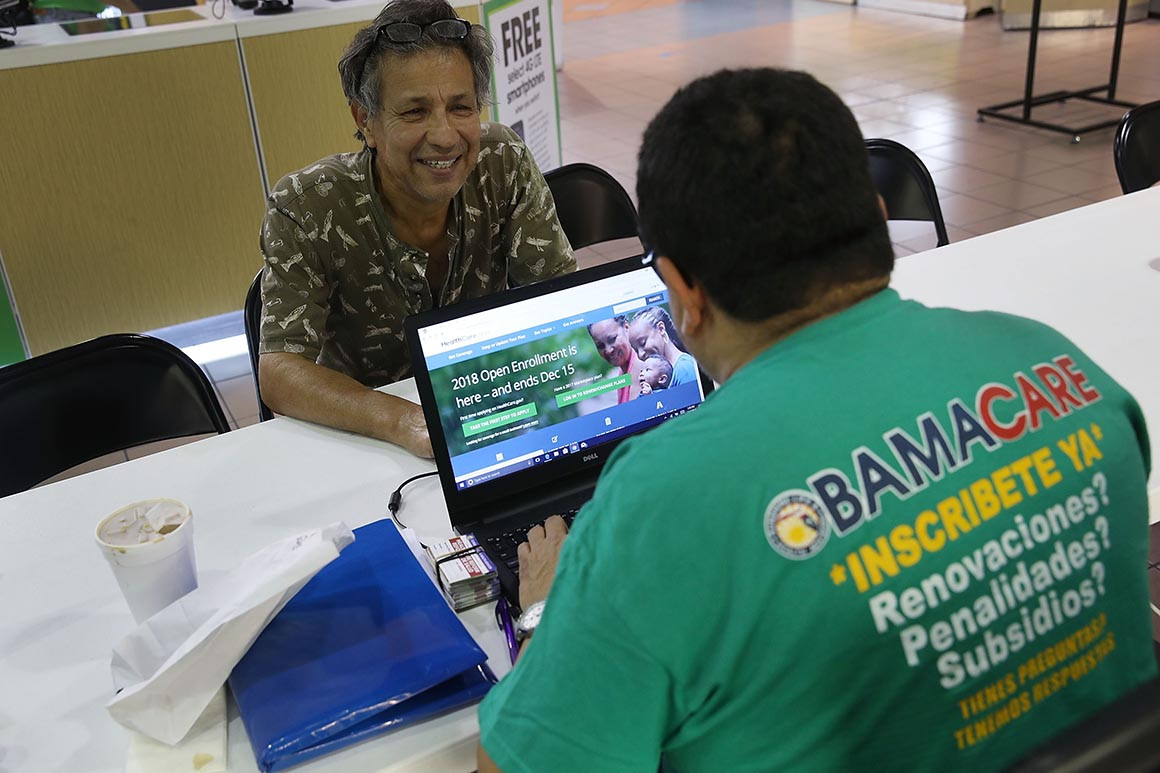 Obamacare enrollment remained relatively stable this year after a last-minute surge at the deadline boosted HealthCare.gov sign-ups to 8.5 million, the Trump administration announced on Wednesday. That represented about a 4 percent drop from last year — less than early indicators had suggested.

The open enrollment period got off to a rocky start and the final day was overshadowed by a federal court ruling that threatens to wipe out the health care law. Nevertheless, there were more than 4 million enrollments during the final week, reversing the downward trend.

The Trump administration quickly sought to take credit for the steady numbers, despite criticism from many health care experts that it had actively sought to undermine the market.

“This administration has taken strong steps to promote a more competitive, stable health insurance market and these steady enrollment numbers are yet another sign that the administration’s efforts are working,” CMS Administrator Seema Verma wrote on Twitter.

HHS Secretary Alex Azar last week had suggested there could be a late boost in sign-ups from people who were waiting for automatic re-enrollment to kick in. Average premium increases were modest this year, which may mean people didn’t shop around and instead let that automatic sign-up option trigger.

Despite the surprising stability this year, the Obamacare markets have shrunk. Total Obamacare enrollment peaked at 12.7 million in 2016. Sign-ups dropped off last year as the Trump administration shortened the sign-up window and cuts to federal outreach programs.

“With 8.5 million people signed up for health insurance for 2019 in the federal ACA marketplace, it is far from dead and remarkably resilient,” Larry Levitt, senior vice president at the Kaiser Family Foundation, wrote on Twitter.

A confluence of factors threatened to depress enrollment this year, including further cuts to outreach, legal uncertainty over the law’s future, the repeal of the individual mandate penalty on those who forego insurance and the lure of newly available inexpensive short-term plans.

Some of the falloff may have been from good economic news and a strong job market. With unemployment the lowest it’s been in decades, health care experts predicted that fewer people would turn to Obamacare’s individual market for health coverage because they got it through work.

Verma dismissed concern over outreach cuts. “Big ad budget does not drive enrollment,” she wrote on Twitter. “Enrollment dropped in 2017 after boosting ad spending by $47 mil and then increased in 2018 after ad funding reduced by $91 mil. Enrollment steady into 2019 with lower ad spending, more focused outreach.”

Though the federal judge’s ruling against the health care law appears not to have dampened interest in the final day of open enrollment, Democratic lawmakers say it may have ramifications in the coming weeks.

“Right now, a single mother who signed up for coverage during the open enrollment period is trying to make a decision about whether or not she ought to pay her premium,” said Sen. Ron Wyden (D-Ore.), the top Democrat on the Finance Committee.

Wyden added, however, that though the ruling puts a cloud of uncertainty over the enrollment period, it is just one more hurdle for the program in an already difficult year.

“Our job was a challenge for months before this decision came out,” he said. “The reality is that the Trump sabotage program has been running a while.”

Several states with their own marketplace are reporting that more people are signing up for coverage compared with last year.

New York has surpassed 1 million ACA enrollments, already topping last year’s total, with the sign-up window continuing through the end of January. Similarly, Maryland reported that enrollments increased by 2 percent and Colorado and Minnesota are about 5 percent ahead of last year’s pace.

One notable exception to the enrollment success of state-based marketplaces is Washington state, which saw sign-ups drop by nearly 10 percent. In addition, California remains a big question mark. Enrollments trailed last year’s pace early on, but the sign-up window continues through Jan. 15.

L.A. Care Health Plan says it’s retaining about 80 percent of current Obamacare customers and has signed up 12,000 new members, tracking with the insurer’s expectations. CEO John Baackes says the repeal of the individual mandate doesn’t appear to have had much effect on the market, but he’s nervous about fallout from the federal judge’s ruling on Obamacare.

“We continue to have a cloud hanging over the Affordable Care Act,” Baackes said. “It just means we’re going to have to remain vigilant in protecting the gains that we’ve made and hope it is overturned on appeal.”

Source: https://www.politico.com/story/2018/12/19/obamacare-sign-ups-late-surge-1039558
Droolin’ Dog sniffed out this story and shared it with you.
The Article Was Written/Published By: pdemko@politico.com (Paul Demko)