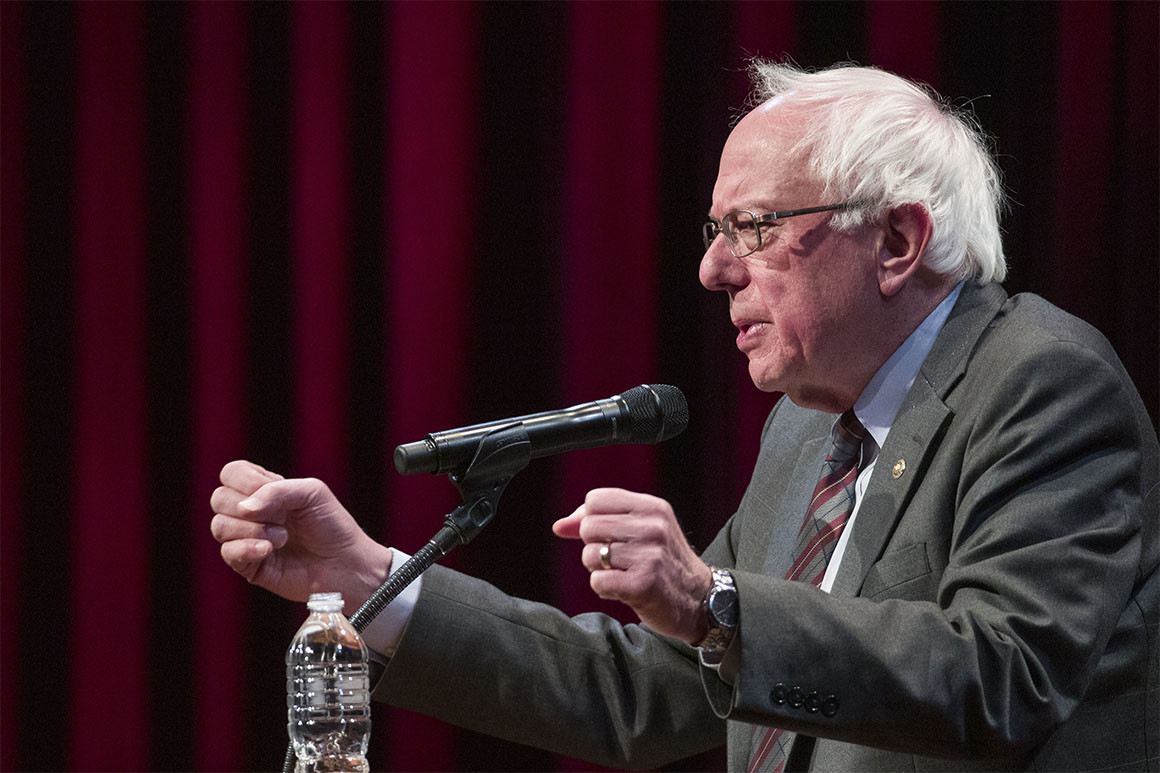 Sen. Elizabeth Warren (D-Mass.), meanwhile, has seen her stock slide among the group‘s members, according to the poll released Tuesday and obtained first by POLITICO. The Massachusetts senator, whose success in similar polling four years ago propelled DFA to help organize a massive but ultimately unsuccessful effort to draft her into the 2016 presidential campaign — was running fourth.

The straw poll is more significant as a sign of organizational support than as a measure of public opinion. DFA boasts more than a million members, and after throwing its support from Warren to Sanders in 2016, it played an instrumental role in his unsuccessful presidential campaign.

But in the run-up to 2020 — even with Warren and Sanders both mulling presidential bids — the poll reflects uncertainty on the left about a progressive standard-bearer.

Leading the field was Sanders, with 36 percent support. He was followed by Biden at 15 percent and O’Rourke at 12 percent. Warren and Sen. Kamala Harris (D-Calif.), received 8 percent and 7 percent, respectively. No other potential candidate received more than 4 percent.

Following the 2016 election, Sanders galvanized support by running “one heck of a fantastic presidential campaign,” said DFA’s current executive director, Charles Chamberlain, who will become chairman of the group in January. He said the straw poll exposes that Warren and Harris “have some work to do” to build support among progressives. But he said the poll at this early stage for DFA members is also a “cross between name recognition, people they’re excited about and people they actually think are running.”

He said support for Biden likely draws in part from nostalgia for the Obama administration and that, among progressive Democrats, “I have a feeling the wheels come off the cart when he starts to campaign.” Biden, however, has consistently led early national polls of Democratic voters.

DFA said members cast more than 94,000 votes, ranking up to three potential candidates on each ballot. The poll ran Nov. 29 through Dec. 14, and results reflect only first-choice votes. The group polled 23 candidates, with write-ins accounting for nearly 5 percent of the vote, officials said.

“These results make clear that, while Bernie Sanders has a strong early lead, no single potential presidential candidate has full command of the Democratic Party’s progressive base heading into 2019,” the group’s incoming chief executive, Yvette Simpson, said in a prepared statement. “With more than 14 months before Iowa, we expect these results to change as grassroots progressives hear the messages the candidates are running on, see the campaigns executing on the ground, and watch them construct the broad-based coalition of the New American Majority of people of color and white progressive voters it will take to beat Donald Trump.”

The DFA said it will run additional polls before any endorsement, with the next survey likely to come in the first half of 2019. None of the top-tier contenders have said yet if they will run for president, though most have been laying groundwork for a potential campaign for months.

The poll’s release follows a similar measure by the progressive group MoveOn, which had O’Rourke, Biden and Sanders running first, second and third. The same politicians rounded out the top of the first Des Moines Register/CNN/Mediacom survey of the 2020 field last week. That poll put Biden ahead of Sanders and O’Rourke among Iowa Democrats likely to participate in the 2020 presidential caucuses.

DFA, founded by Howard Dean following his run for president in 2004, said it has raised and contributed more than $62 million to progressive candidates nationwide.

In the run-up to the past presidential election, in late 2014, Warren topped the DFA’s membership poll with 42 percent support. Then, in a bid to nudge Warren into the race, DFA and MoveOn organized an effort that opened offices in the early voting states of Iowa and New Hampshire and gathered 365,000 signatures before ultimately abandoning the campaign and rallying behind Sanders.

“Let’s be clear: Progressive support in the 2020 Democratic primary is up for grabs and so is Democracy for America’s endorsement,” Chamberlain said in a prepared statement. “Unlike 2016, no candidate has support strong enough for the Democratic Party establishment to clear the field, which means progressives will have an excellent opportunity over the next year to kick the tires on a wide range of different candidates and find the best one to take on Trump. With a clear majority of the top five candidates being champions of Medicare for All, these results illustrate that Americans are eager for bold, progressive candidates who will fight for the multiracial inclusive populism America needs in 2020 and beyond.”

Source: https://www.politico.com/story/2018/12/18/bernie-sanders-straw-poll-2020-elections-1067867
Droolin’ Dog sniffed out this story and shared it with you.
The Article Was Written/Published By: dsiders@politico.com (David Siders)