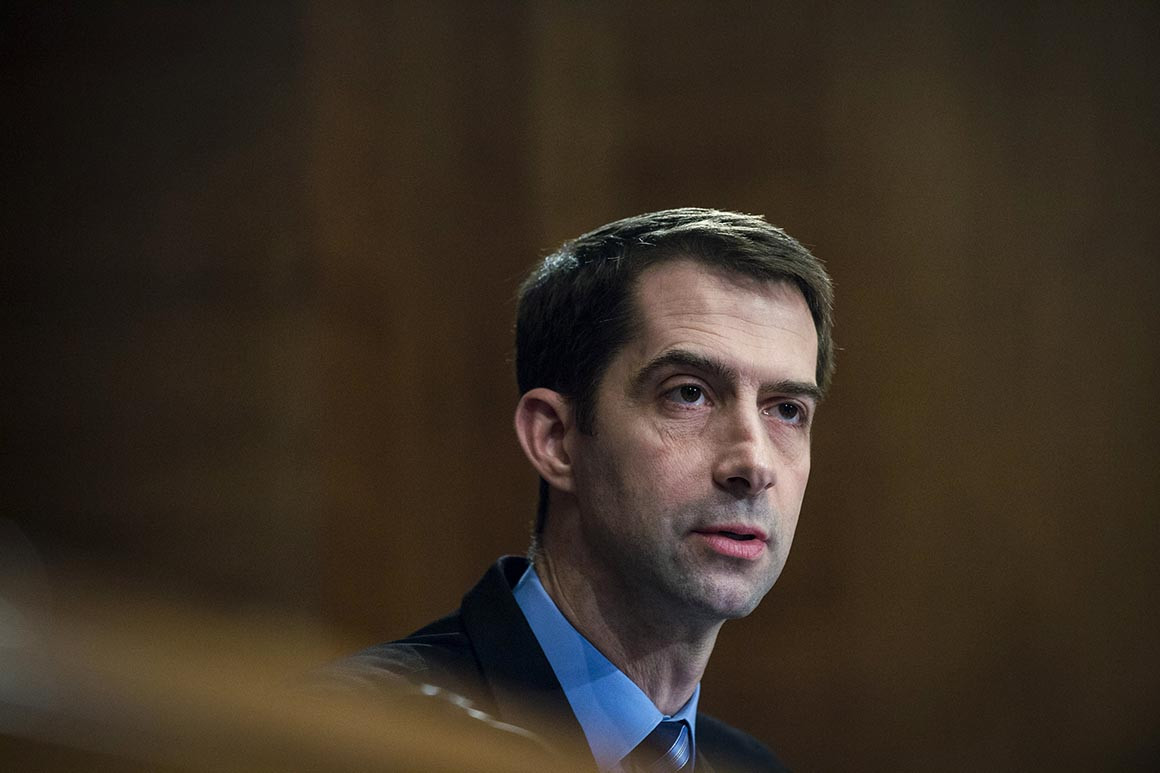 The Arkansas Republican is pushing changes, introduced with Sen. John Kennedy (R-La.), that could blow up the fragile compromise on legislation to reform prisons and sentencing laws.

The amendments would bar more offenders from participating in the bill’s earned-time credit program and would require the Bureau of Prisons to notify victims when a prisoner is released early. The amendments also would require authorities to track arrests of ex-convicts after they’re released from prison early.

In an op-ed published Monday in National Review, Cotton argued that his “conservative friends and colleagues … have jumped on the bandwagon too soon.”

“A number of serious felonies, including violent crimes, are still eligible for early release in the version of the bill the Senate will vote on in a matter of days,” Cotton wrote. “In short, the First Step Act [criminal justice overhaul] flunks their basic test to protect public safety.”

But Democrats argue that Cotton’s amendments are nothing more than a strategy to sink the broader bill. They note that the amendments would divide the coalition of lawmakers and interest groups in favor of the bill and that the changes would only complicate the process for getting the bill through the House.

“They’re designed to kill it so I’m a no vote on all three,” said Sen. Tammy Duckworth (D-Ill.) “I can’t see how they could possibly go through.”

For some Democrats, the passage of the amendments would also kill their ultimate vote for the criminal justice reform bill.

But other Democrats said that if the amendments passed, they would need to wait and see before deciding whether to approve the final bill. Sen. Doug Jones (D-Ala.) called the amendments a “poison pill” but added that he had not made a decision on how he’d vote if the amendments do get attached.

“There may be a couple I could live with but I think they’re all bad bills,” Jones said.

The Cotton amendments are the latest obstacle in a dramatic push to get criminal justice reform through in the lame-duck session — a priority for President Donald Trump and his son-in-law, Jared Kushner. Until last week, the prospect of criminal justice reform seemed dead, with Senate Majority Leader Mitch McConnell (R-Ky.) reluctant to bring a bill to the floor because it divides his caucus. But last week, he said he would bring the bill to the floor.

The Senate voted 82-12 Monday to move forward with the bill, moving closer to a final vote. In addition to Cotton and Kennedy, the Republicans who voted against moving forward were Sens. John Barrasso of Wyoming; Richard Burr of North Carolina; Mike Enzi of Wyoming; Jon Kyl of Arizona; Lisa Murkowski and Dan Sullivan of Alaska; Jim Risch of Idaho; Mike Rounds of South Dakota; Ben Sasse of Nebraska; and Pat Toomey of Pennsylvania. The Cotton amendments, on which the Senate will likely vote on Wednesday, face an uphill battle amid Democratic resistance as well as opposition from some Republican senators, including Mike Lee of Utah.

“I think there’s a good chance of defeating it, but I don’t have a vote count for you,” Senate Judiciary Chairman Chuck Grassley (R-Iowa) said.

He added that he might support a final criminal justice reform bill with the amendments attached, but that such a bill would lose the Democratic votes needed to pass.

Senate Majority Whip John Cornyn (R-Texas) said he was “still evaluating the amendments” and he was “talking to Sen. Cotton and his staff too to see if there are some ways we might find consensus.”

The amendments have prompted last-ditch efforts to kill them from advocacy groups, including the American Conservative Union, FreedomWorks, Justice Action Network and Americans for Prosperity. In a letter sent Monday to Senate leadership, the groups wrote that one of the amendments “would make virtually all federal prisoners ineligible for earned time credits, with the exceptions of low-level drug offenders and white collar criminals” and was “antithetical to the heart of the bill.”

Source: https://www.politico.com/story/2018/12/17/senate-criminal-justice-bill-tom-cotton-1067913
Droolin’ Dog sniffed out this story and shared it with you.
The Article Was Written/Published By: mlevine@politico.com (Marianne LeVine)

Read Evan Minsker’s review of the album. Source: https://pitchfork.com/reviews/albums/the-armed-ultrapop/ Indie Brew found this story and shared it with you. The Article Was Written/Published By: Evan Minskerv [...]

Now that toxic Anon Rep. Marjorie Taylor Greene spilled the secret that Jewish Space Lasers started the wildfires, the Secret Jewish Space Laser Corps has come out in the open and is selling shirts, badges, and pins with its “Mazel Tough” logo. — Read the rest Source: https://boingboing.net/2021/04/15/the-secret-jewish-space-laser-corps-has-awesome-swag.html?utm_source=rss&utm_medium=rss&utm_campaign=the-secret-jewish-space-laser-corps-has-awesome-swag Indie Brew found this story and shared... [...]

Last year, two days after Sufjan Stevens released his grandiose, depressive electro-pop opus The Ascension, his biological father died. Naturally, this set off an emotional chain reaction, and naturally, Sufjan has processed all those feelings through music — a lot of music. Last week he began releasing Convocations, a series of five instrumental albums spanning... [...]

In November 2018, just after he released his tremendous FM! project, rapper and Twitter comedy genius Vince Staples appeared at ComplexCon in his native Long Beach. At the panel, he announced he had already completed four more albums, the first of which was supposedly coming in January 2019. That did not happen. In fact, we... [...]

Nick Thorburn is releasing a new Islands album in a couple months, the project’s first new material since its pair of 2016 albums, Should I Remain Here, At Sea? and Taste. He announced Islomania last month with the single “(We Like To Do It) With The Lights On” and we talked to him about it... [...]

A Guide to the Afrofuturist House Music of Dirty Bird

The prolific producer has been at the forefront of an underground resurgence in house music among compatriots like Dazegxd and the Eldia collective. Read full story on the Bandcamp Daily. Source: https://daily.bandcamp.com/lists/dirty-bird-list Indie Brew found this story and shared it with you. The Article Was Written/Published By: James Guiv [...]