The next big political memoir isn’t coming from inside the Trump White House. But it is likely to offer eye-popping tales from inside another important D.C. institution.

Former House Speaker John Boehner is at work on a memoir about his time in Washington, which stretched nearly two and a half decades, from 1991 to 2015. Then he was chased out of office by the right flank of his party.

The tentative title, “Notes From a Smoke-Filled Room,” suggests that Boehner intends to portray himself as an anachronism, a creature from a bygone era when bipartisan deals were negotiated by party leaders behind closed doors rather than in front of the cameras and on Twitter — and when a politician’s habit for enjoying one too many glasses of expensive Merlot was indulged not excoriated.

“I get the question every day: What was the proudest accomplishment of your time in Congress? And I think it’s that I walked out of there in October 2015 as pretty much the same jackass I was when I walked in almost 25 years earlier. I walked out of there with no regrets … and a hell of a lot of good stories,” Boehner told POLITICO in a statement.

Following the Republican Revolution of 1994 and, during his career, Boehner served alongside the major political figures of the past three decades, from Newt Gingrich and the late Sen. Ted Kennedy to George W. Bush and Barack Obama. Reflecting on his former colleagues, he has since remarked that one “doesn’t know how to dress,” called another a “total phony” and decried a third as a “legislative terrorist.”

Boehner, of course, was one of the most high-profile political leaders of the last three decades. He first came to Washington in 1991 as a self-styled political reformer from Ohio. He, along with other young Republicans like Rick Santorum of Pennsylvania, called themselves the Gang of Seven, and helped expose the House banking scandal. 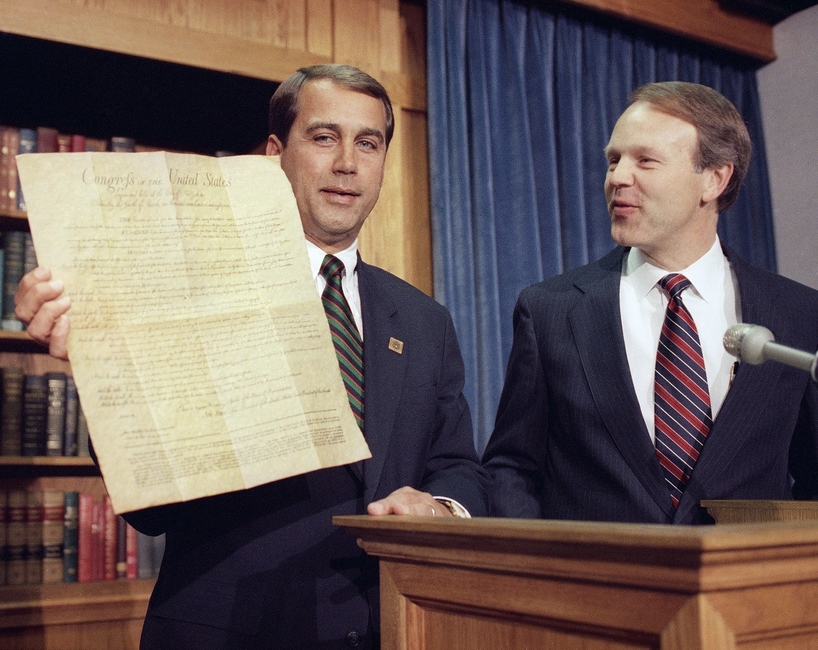 When Republicans won the House in 1994, Boehner became the chairman of the House Republican Conference, but was booted from the leadership in 1998. He re-entered the leadership in 2005, later chairing the Education and Labor Committee, where he partnered with Kennedy, a Democrat, to write No Child Left Behind, the Bush-era education law.

But some of Boehner’s most consequential stories came between 2011 and 2015, when he was the speaker of the House in a sharply partisan and divided Washington. Boehner was the top House Republican during the majority of Obama’s presidency, and wrestled with him over debts, deficits, taxes and spending.

He was also criticized by the right wing of his party for being too eager to strike deals with Democrats. And he caught flak constantly for his close ties to business and lobbyists. He was criticized in 1995 for passing out campaign contributions on the House floor.

Boehner was represented in the book deal by Keith Urbahn and Matt Latimer of the Javelin agency, who have also represented other spirited and controversial memoirists, including former FBI Director James Comey, and other Republican lawmakers like Sens. Ben Sasse of Nebraska and Ted Cruz of Texas.

“John Boehner is, in many ways, the last of a breed,” Boehner’s publisher, Thomas Dunne Books, an imprint of St. Martin’s Press, said in a statement. “In a world of kale chips, cold-pressed coffee and soul cycles, he’s a man of Camels, good wine and frequent tee times. He doesn’t chase political fads or play to the cameras. Despite being second in line to the presidency, he thought of himself as a regular guy. A happy warrior. There could hardly have been, at that time, a more diametrically opposed figure to represent the opposition party during Barack Obama’s presidency.”

The book is tentatively scheduled for publication in spring 2020, in the middle of the next presidential campaign.

Source: https://www.politico.com/story/2018/12/17/john-boehner-book-memoirs-1066804
Droolin’ Dog sniffed out this story and shared it with you.
The Article Was Written/Published By: sherman@politico.com (Jake Sherman)