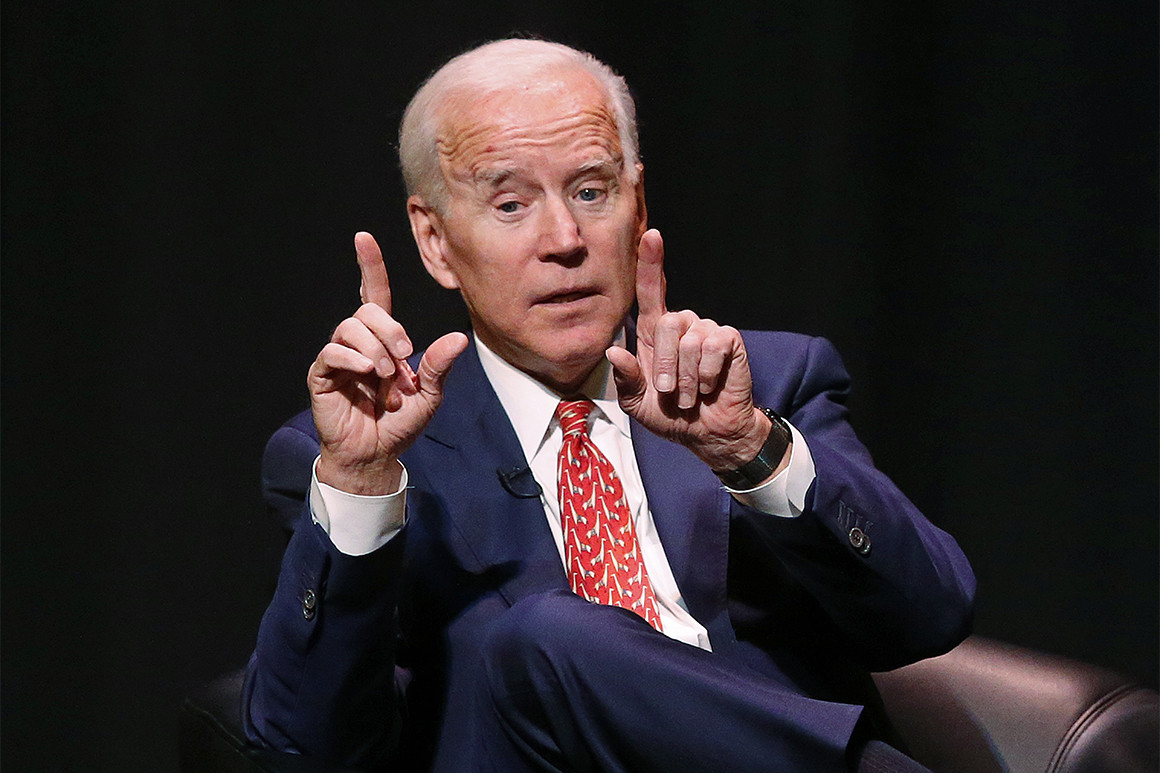 Joe Biden is the top choice of nearly a third of Iowa Democrats likely to participate in the 2020 presidential caucuses — putting the former vice president atop a roughly 20-candidate field 14 months ahead of the first votes, according to a new poll released Saturday.

The first Des Moines Register/CNN/Mediacom survey before the 2020 caucuses shows Biden beginning a potential bid at 32 percent in Iowa, more than a dozen points ahead of the second-place candidate, Vermont Sen. Bernie Sanders. The 2016 runner-up for the nomination is at 19 percent.

Outgoing Texas Rep. Beto O’Rourke, who lost a Senate race last month, is in third place, at 11 percent. Slightly behind him are Massachusetts Sen. Elizabeth Warren at 8 percent, and California Sen. Kamala Harris at 5 percent.

All other candidates are below 5 percent support. Only 6 percent of poll respondents said they weren’t sure whom they would support after being read a list of 20 names.

The Register’s poll is a closely watched barometer of the state’s politics. Pollster Ann Selzer is a political celebrity in Iowa, in equal parts due to her track record of accuracy and the influence of the poll on the caucuses.

And with a vast candidate field that could include the experienced Biden — who served 36 years in the Senate and 8 years as vice president — and a three-term congressman in O’Rourke, more voters say they want a “seasoned hand” to face off with Trump (49 percent) than a newcomer (36 percent).

Aside from the three leading candidates, the top candidates are New Jersey Sen. Cory Booker (4 percent), former New York Mayor Michael Bloomberg (3 percent) and Minnesota Sen. Amy Klobuchar (3 percent). Another four candidates are at only 1 percent, including Maryland Rep. John Delaney, a declared candidate who has already visited all of the Iowa’s 99 counties, according to his campaign.

Potential candidates who failed to register any support at all include wealthy businessman Tom Steyer, who has run ads in the state to tout his drive to impeach Trump.

With few candidates officially running yet, Biden and Sanders also lead the field in name identification. Only 4 percent of voters said they didn’t know enough to have an opinion of each man. O’Rourke (36 percent have no opinion), Harris (41 percent) and Warren (16 percent) have lower name-ID.

Biden, in particular, stands out from the rest of the field. In addition to the 32 percent who say the former vice president is their preferred candidate, he is the second choice of another 18 percent of likely caucusgoers. Only 8 percent of caucusgoers say they could never imagine voting for Biden.

He is also the best-liked potential candidate: More than eight-in-10 Democrats, 82 percent, have a favorable opinion of Biden. Only 15 percent view him unfavorably.

Sanders is viewed favorably by 74 percent of Democratic caucusgoers, and unfavorably by 22 percent.

The potential candidate with the highest negatives: Bloomberg, who was elected in New York as a Republican. Forty percent of Democrats view him favorably, while 31 percent have an unfavorable opinion.

One longtime Democratic figure isn’t welcome in the race, however: A large majority of caucusgoers, 72 percent, say 2016 nominee Hillary Clinton would “detract” from the race for president, while only 25 percent say she would add to the race. And roughly as many Democratic voters have an unfavorable opinion of Clinton (49 percent) as view her favorably (47 percent).

Clinton, who narrowly defeated Sanders in the 2016 caucuses, says she won’t run for president again.

The poll was conducted December 10-13 by West Des Moines-based Selzer & Company. Out of 1,838 registered voters contacted, 455 said they would definitely or probably attend a Democratic caucus in early 2020, for a margin of error of plus or minus 4.6 percentage points.

Source: https://www.politico.com/story/2018/12/15/iowa-poll-biden-2020-democrats-1066661
Droolin’ Dog sniffed out this story and shared it with you.
The Article Was Written/Published By: SShepard@politico.com (Steven Shepard)