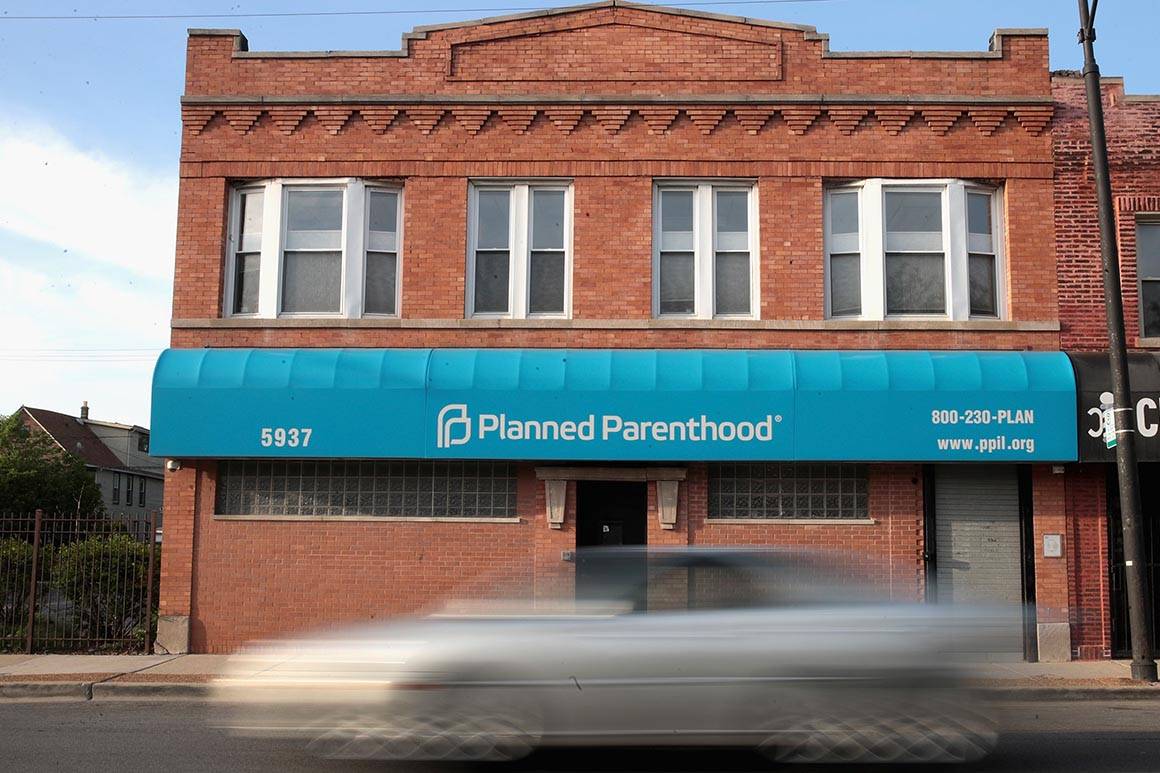 PORT ANGELES, Wash. — Anti-abortion family planning clinics are increasingly vying for the same federal funds that go to Planned Parenthood, signaling a major change in federal policy being pushed by the Trump administration.

This new front in the abortion wars comes as conservatives have largely given up on completely defunding Planned Parenthood, so they’re trying to use the rules to their advantage, pushing for faith-driven women’s clinics to apply for those same federal funds to push an anti-abortion agenda.

“Now they have an administration that’s supportive of the work they’re trying to do, and that’s setting the stage to open the door for more sources of funding for these sites,” Hasstedt added. Critics say these clinics can be confusing to women who seek care or advice about a pregnancy without realizing their religious and anti-abortion orientation.

One controversial administration proposal, which could be finalized in the next month or so, would let faith-based clinics compete for Title X family planning funds — much of which now go to Planned Parenthood. That move is being challenged in a federal appeals court.

So-called “crisis pregnancy centers,” which offer limited services such as pregnancy testing, ultrasounds and certain supports for women with unplanned pregnancies, have been increasing in number for several years; there are now about 2,530 of them, according to a mapping project from the University of Georgia College of Public Health — or around 2,750, according to the Charlotte Lozier Institute, the research arm of the anti-abortion Susan B. Anthony List.

Now, some are trying to become an anti-abortion, abstinence-promoting alternative to Planned Parenthood clinics.

“I didn’t recreate the wheel,” said Kathleen Eaton Bravo, the CEO of the Obria Group, a nonprofit chain of clinics that’s now expanding beyond the West Coast. The chain has been adding medical services as part of its long-term vision — one that also lets them bill insurers and qualify for government funds. “I’m using Planned Parenthood’s model, and it’s working.”

Scrapping the quotes from Scripture displayed on their walls, some pregnancy crisis centers are becoming licensed clinics by adding health services like prenatal care, sexually transmitted disease testing or treatment, and “natural family planning” or fertility awareness — though not FDA- approved contraceptives like birth control pills, or condoms, and certainly not abortions or abortion counseling.

The federal government rejected Obria this year for Title X family planning grants because, under the current rules, the Trump administration still requires grantees to include a provider that offers hormonal birth control. Obria plans to reapply, by partnering with a health center that does provide contraception, though not abortion.

“There’s a growing trend of these centers becoming more medicalized,” said Andrea Swartzendruber, an assistant professor who led the Georgia survey of the clinics. So far only a fraction have switched from pregnancy counseling sites to clinics — about a fifth offer STD testing — but the numbers are growing. Lozier’s Chuck Donovan said the number of clinics offering STD testing and treatment had more than doubled over the past decade, to 487 in 2017.

Once licensed, the clinics can bill Medicaid and private insurers, and tap into some federal grants for women and babies’ health. So far they haven’t gotten Title X money — the $260 million federal family planning program — but that could change under the administration policy now being finalized.

Based in Orange County, Calif., the Obria Group is on the front lines of this trend. Bravo, the founder, calls her clinics a “holistic” and “comprehensive” alternative to Planned Parenthood. She recently visited some pregnancy crisis centers in Port Angeles, Wash., a city of just under 20,000 on the Olympic Peninsula, that are going to add medical services as they come into Obria’s fold.

Growing from three centers and a mobile van, Obria now has 30 clinics in five states — the more liberal California, Oregon and Washington and the more conservative Iowa and Georgia — and aims to reach 200 sites by 2021. That would cost about $90 million — $300,000 to $500,000 per clinic for upgrades. Obria would raise a lot of that through donations, but also hopes to finance expansion with Title X funds, according to Mauricio Leone, Obria’s chief operating officer, who is transitioning into a new role as executive director.

Backers of fuller reproductive health services for women see nothing comprehensive or “holistic” about clinics that don’t offer a broad range of contraceptive choices, including condoms, and oppose abortion in all circumstances. They also see the move away from vaguely religious-sounding names — like My Choices or Life Choices — to a more corporate sound like Obria as a way to confuse women who go to these clinics not realizing they will be steered away from abortion as an option.

HHS’ embrace of these centers has critics in Congress, too.

“The challenge with this administration is they want to eliminate the ability of women to make that decision on their own, with their families, with their medical providers,” said Sen. Jeanne Shaheen (D-N.H.) “And that’s the objection I have.”

The build-out of these clinics comes as conservatives, who failed to defund Planned Parenthood in Congress, take their battles to the courts and the states. If they can’t cut off Planned Parenthood completely, they may be able to shift some of the money to places like Obria.

“I love the Obria model because they’re trying to take it to scale,” said Joneen Mackenzie, president of the Center for Relationship Education, a Denver-based organization that promotes abstinence-oriented sex ed. MacKenzie praised Obria’s “corporate-driven” and “professional” structure. The Lozier Institute’s Donovan, who is a member of Obria’s national advisory board, praises the marketing savvy of Bravo, who used to run an engineering contracting company, brings to her mission.

Bravo can survey a crisis pregnancy center, like the My Choices one that’s aligning with Obria here in Port Angeles, and see exactly how to convert it into a licensed clinic with a revenue stream. Turn the room used to store baby clothes and new mom accessories into a lab, she said. Transform meeting rooms into exam rooms, so they have four places, not one, for doctors and nurses to see patients — and bill for services.

A mother and grandmother who harbors deep regrets over her own abortion 38 years ago, Bravo knows that having Obria rely primarily on donations is not sustainable. To bill Medicaid and insurers, Obria needs to install electronic health records and practice management systems. Some of its clinics are already licensed and accredited; others are in the works.

The group also wants to tap into federal grants, and most recently won $450,000 in Title V funding out of the Sexual Risk Avoidance Education program — sometimes still called “abstinence education” — in Obria clinics, public schools and other settings.

Although it’s open to partnering for the Title X money, the Obria clinics themselves have an unyielding stance on contraception — or as Bravo colorfully puts it, they cater to “women who want no drugs, plugs, jellies or jams.”

Her regrets about her own abortion, which came after the birth of her first son, and her return to the Roman Catholic faith led Bravo to the anti-abortion movement. She operated “maternity homes” for homeless mothers, and in 1986 founded pregnancy resource centers in Orange County under the name Birth Choice.

About a decade ago, she began envisioning a more professional, medical version, and Birth Choice started hiring physicians and nurse practitioners in 2006, About three years ago, a branding company she hired came up with the name Obria, and last year she officially established The Obria Group, the umbrella for the national network, and began growing it.

Bravo insists her clinic staff does tell women about their three choices: parenting, adoption or abortion. She won’t refer for abortions, though, think that women can figure that out on their own.

“It’s about her, and not us. We listen to her instead of giving our agenda,” she said, adding that she once fired a nurse at one of her clinics for proselytizing.

But the clinics promote only natural family planning, and although they test for and some treat STDs, they don’t distribute condoms to prevent them.

Bravo is unperturbed by those who say Obria can’t be a women’s health clinic if it doesn’t support contraception (other than the natural system) and abortion rights.

Borrowing the language of the abortion rights movement, Bravo defines it as “choice” — no different than having a McDonald’s across the street from, say, Wienerschnitzel. Hamburgers for some, hot dogs for others.

“There’s a huge need for women’s health care,” she said, “and everybody doesn’t have to do it the same way.”

Adam Cancryn contributed to this report.

Source: https://www.politico.com/story/2018/12/16/abortion-pregnancy-centers-planned-parenthood-1007765
Droolin’ Dog sniffed out this story and shared it with you.
The Article Was Written/Published By: vcolliver@politico.com (Victoria Colliver)