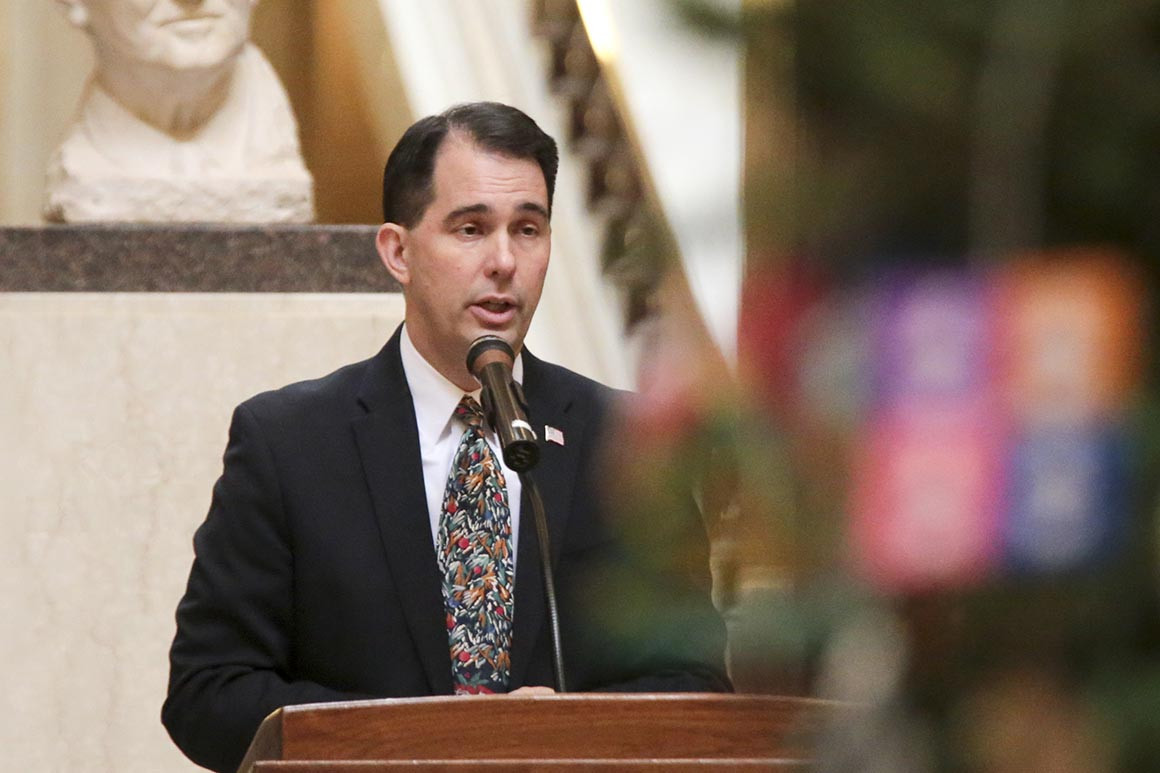 Gov. Scott Walker on Tuesday defended several measures included in lame-duck bills Republicans passed last week that would strip the incoming governor and attorney general of some of their powers, while saying he is considering at least one line-item veto.

Later in the day, after a luncheon celebrating small businesses in Pewaukee, he mentioned the possibility of using his powerful veto pen, but didn’t give specifics on what he might veto.

Democrats, including Gov.-elect Tony Evers and Attorney General-elect Josh Kaul, have urged him to veto the legislation on the grounds it undermines the will of the voters. Some Republicans, such as former Gov. Scott McCallum, have slammed the bills as a “power grab” that is poor policy.

Evers said after speaking to Walker last week he was “not particularly encouraged” Walker would put a stop to the Republican effort that has received attention nationwide.

Still, Evers spokeswoman Britt Cudaback continued on Tuesday to press Walker to “put politics aside” and dump the legislation.

Walker addressed the conversation with Evers after the event in Pewaukee. He said Evers didn’t give him many specifics about what he had problems with, other than his concern about making an appointment to an economic development board.

“His specific request was there’s a lot of things that he thought, having run the Department of Public Instruction, were challenges. I asked for what. He didn’t give me any other examples,” Walker said.

In his Facebook post, the outgoing governor wrote the majority of his successor’s powers will remain intact — notably the governor’s veto authority — and suggested the bills would improve transparency, increase accountability, affirm stability and protect taxpayers.

“The new governor will still have some of the strongest powers of any governor in the nation if these bills become law,” Walker wrote. “None of these things will change regardless of what I do with the bills passed in the Legislature last week.”

McCallum, Wisconsin’s most recent Republican governor before Walker, said Tuesday in an interview that Walker’s embrace of the proposals is “a missed opportunity.”

McCallum, who served from 2001 to 2003, has emerged as a key GOP critic of the lame-duck measures, saying they “have the appearance to some of being a power grab.”

Speaking to the Wisconsin State Journal, McCallum said he had hoped the transition from Walker to Evers would permit at least a partial reset of the bitter partisanship that has become the norm in state and national politics.

“Every once in a while you have opportunities to start to change things — in this case, change it for the better with the tone,” McCallum said. “It’s a missed opportunity from that perspective.”

It would also give the Legislature the right to intervene in a case if a state statute is challenged in court and to appoint attorneys other than those from the Department of Justice.

Walker did not directly address those provisions in the bill, but praised others, such as a measure that would take power away from the attorney general and give it to the Legislature to approve how money from settlements is spent. Walker wrote the provision would ensure accountability, arguing it “makes sense” lawmakers would have a greater role in approving how funds from multi-million dollar lawsuits are allocated.

Walker also argued a provision writing Medicaid work requirements into state law would improve the relationship between executive and legislative branches. He also said a part of the bill ensuring new online sales tax revenues are put toward lowering taxes protects workers in the state.

Other controversial measures in the bills that Walker did not address in his social media post include one that would shorten the window for early voting to two weeks before an election, and one that would give more legislative appointments to the board of Wisconsin’s economic development agency. It would also take away the governor’s authority to appoint the WEDC CEO and give it to the board until Sept. 1.

Another provision in the bills would remove a requirement in state law the agency annually verify information submitted by tax credit recipients before the companies can obtain the tax credits.

The Associated Press and State Journal reporter Mark Sommerhauser contributed to this report.

Source: https://www.politico.com/story/2018/12/13/scott-walker-defends-lame-duck-bills-1061818
Droolin’ Dog sniffed out this story and shared it with you.
The Article Was Written/Published By: (Associated Press)