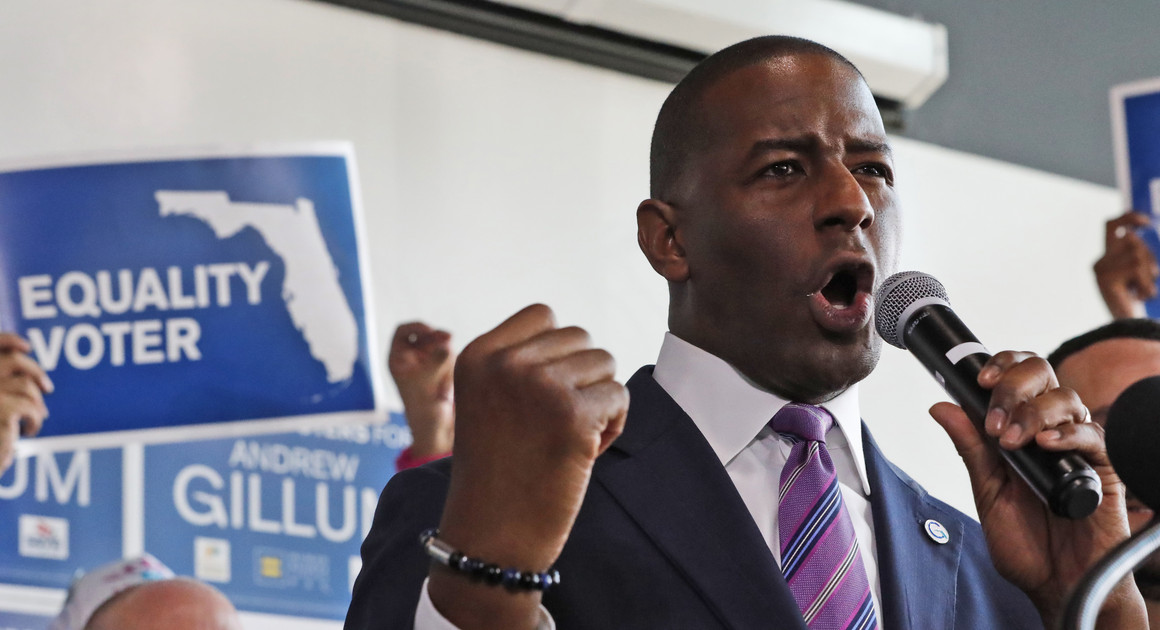 MIAMI — Federal authorities unveiled a 44-count, 66-page indictment Wednesday of a Tallahassee politician and a city official that involved six companies, five other players and a bank in a wide-ranging bribery, extortion, fraud and racketeering scheme.

But amid all the detail and alleged corruption in the indictment, one name is conspicuously absent: Andrew Gillum, who was Tallahassee’s mayor at the time and who was accused repeatedly on the gubernatorial campaign trail this year by Republican opponent Ron DeSantis — and even President Donald Trump — of being tied to the suspected wrongdoing the FBI was investigating.

Republicans spent at least $7 million on TV ads — 27 percent of the total $26 million dropped on air in the general election — attacking Gillum in connection with the FBI probe. But the investigation, records indicate, ultimately had little to do with the former mayor.

The campaign, however, took its toll and Gillum lost to DeSantis by the narrowest margin ever for a Florida Democrat running for governor: 0.39 percentage points, or 32,463 votes out of more than 8.2 million cast. It made the Tallahassee mayor collateral damage in the investigation, which resulted in a multi-count indictment against Tallahassee City Commissioner Scott Maddox and his former chief of staff, Paige Carter-Smith, the city’s Downtown Improvement Authority executive director who was his alleged partner in crime.

However, it’s unlikely that Gillum is a target in this or a related case, said Steven R. Andrews, a criminal defense attorney who represented the city manager when he was hauled before a grand jury in the case. He said his client was never asked about Gillum, and that Gillum has said FBI agents told him he wasn’t a target.

“If the FBI had something on Gillum, they would have brought it by now or it would be in this indictment,” said Andrews, a Republican who has worked to help the GOP in prior statewide races. “They got nothing on Gillum. He got screwed.”

Spokespeople for DeSantis did not return calls or messages seeking comment.

Andrews said Gillum wasn’t the only victim of a what amounted to a smear campaign that helped DeSantis win office. Gillum’s former college friend, lobbyist Adam Corey, was “ruined with all this b.s.,” Andrews said.

Gillum’s friendship with Corey — specifically a trip to New York and Costa Rica — became the subject of state ethics complaints that DeSantis and Republicans conflated with the FBI probe.

There was a rational nexus, however: On the trip to New York, an undercover FBI agent working on the corruption probe supplied Gillum with tickets to the musical “Hamilton.” The agent also accompanied Gillum and Corey in New York during a boat ride past the Statue of Liberty. Gillum’s brother was also in New York at the time, and Republicans said that he may have unwittingly been on the FBI’s payroll, a claim that Gillum’s campaign denied.

Corey’s lawyer, Republican Chris Kise, released details of the New York trip and “Hamilton” tickets in the waning days of the campaign. The documents contradicted Gillum, who said he paid for all his expenses. In one debate, DeSantis pressed Gillum on who paid for the “Hamilton” tickets just before the records were released.

Kise, who was subsequently appointed to DeSantis’ transition team, declined to comment on the Maddox indictment, saying he hadn’t read it. He previously said he was releasing the records because they would go public in the pending state ethics case anyway.

Unlike other Republicans, however, Kise has made sure to never suggest that Gillum was the subject of any federal investigation.

Word of the FBI investigation rippled across Tallahassee City Hall in June of 2017 when the agency sent subpoenas for documents. Gillum’s political opponents in the Democratic primary made sure to spread the word and Gillum’s campaign almost died as his fundraising dried up and staff had to leave. But Gillum battled back and breathed a sigh of relief in February, when the Tallahassee Democrat unearthed documents indicating that Maddox was a target of the investigation.

“The FBI never subpoenaed records from Andrew,” said Gillum’s attorney, Barry Richard, who is representing him in the state ethics case. “They never said he was a suspect. They told him to his face that he wasn’t a target. The most likely thing is the whole investigation targeted Maddox from the start.”

Richard said he’s not representing Gillum in the federal case because “there is no federal case involving him that I’m aware of. I told him he should call me if he had any reason to believe the FBI was investigating him. He never had to call.”

The state ethics case, a misdemeanor issue, has yet to be resolved.

In the final months of the campaign, as polls showed Gillum moving ahead of DeSantis in the general election, the former congressman and Republicans sprung into action, calling Gillum corrupt in speeches and in paid media in English and Spanish.

Gillum fired back by noting that he was trying to help the FBI conduct an investigation into corruption, while DeSantis in Congress was trying to “obstruct” the federal probe of Trump, who in the waning days of the campaign personally attacked Gillum.

According to the indictment of Maddox and Smith unveiled Wednesday, the two participated in a racketeering conspiracy involving two consulting companies that they allegedly attempted to use to extort companies in return for Maddox’s votes or help in City Hall, where he used to be mayor. Maddox was also a former chair of the Florida Democratic Party and had unsuccessfully run statewide for agriculture commissioner.

In all, Maddox and Smith allegedly represented or corruptly approached six companies doing business or seeking to do business with the city. The firms, identified in the indictment only as Company A, B, C, D, E or F, were engaged in construction, engineering, ride-sharing transportation, garbage, development and medical marijuana. The Tallahassee Democrat identified two of the firms as Uber and Waste Pro USA.

In one case, when an architectural engineering firm listed only as Company A fell behind on its payments, Maddox would allegedly tell them to “show me some love” in order to receive his payoffs. On more than one occasion after engaging in a corrupt scheme, the indictment says, Maddox would quote the fictional character John “Hannibal” Smith from the 1980s “A-Team” show by saying, “I love it when a plan comes together.”

One of the firms that engaged with Maddox, Company F, was a dummy company set up by the FBI to find dirty deals in the city. It was through this company and its undercover agents that Gillum was also initially approached by the FBI leading up to his trip to New York. The documentation and investigative materials concerning Gillum have never been released and likely will never be.

For Jamie Van Pelt, Gillum’s former chief of staff in City Hall, the fact that Gillum is being proven right is cold comfort in light of the campaign to tarnish him as corrupt.

“With the mayor’s name not being listed in the indictment, there’s a sense of vindication. But as we said all along, this is not a surprise to us. It’s not a surprise to the mayor. He wasn’t a target,” said Van Pelt. “But this isn’t an ‘I told you so’ moment, for our community. This is a very somber time. When something like this happens, it shocks a city.”

Source: https://www.politico.com/states/florida/story/2018/12/12/he-got-screwed-gillum-absent-from-indictment-after-desantis-bashed-him-as-corrupt-742989
Droolin’ Dog sniffed out this story and shared it with you.
The Article Was Written/Published By: mcaputo@politico.com (Marc Caputo)