President Donald Trump will weigh several criteria as he searches for his next chief of staff, including loyalty, political skills and management experience. But there’s one thing any potential hire must do: win the approval of Jared Kushner and Ivanka Trump.

Trump’s son-in-law and daughter, who are also White House advisers, want a political ally in the chief of staff job, and they are using their unrivaled influence to ensure they get one, according to seven former and current White House officials.

Those sources described a search process steered by the president — “He’s just calling around to friends,” as one Republican close to the White House put it — but carefully regulated by his family as Trump works to replace his outgoing chief of staff, John Kelly.

Their influence could dim the chances of some candidates for the post, White House aides and allies say, including one of Trump’s favorites — Rep. Mark Meadows (R-N.C.), who is not close with the thirtysomething couple. They are also opposed to the prospect of former Trump deputy campaign manager David Bossie taking on the role. It’s also an obstacle for former New Jersey Gov. Chris Christie, who put Kushner’s father behind bars as a federal prosecutor in New Jersey.

Among Kushner and Ivanka Trump’s top choices is Treasury Secretary Steven Mnuchin, whom they view as extremely loyal. Mnuchin is said to be uninterested in the often-thankless job of Trump’s staff chief, however.

Kushner in particular is riding high at the moment. On Tuesday, Senate Majority Leader Mitch McConnell (R-Ky.) announced that the Senate would take up a criminal justice reform bill that Kushner has spent months crafting, and whose fate had recently seemed uncertain. Kushner was rewarded with a grinning photo prominently featured on the Drudge Report — whose publisher, Matt Drudge, he has cultivated as an ally, and whose coverage Trump follows closely.

Kelly may have hastened his demise by emerging as an internal rival of the couple. The retired Marine general found their vaguely-defined government roles and unfettered access to Trump exasperating. Tensions between the two camps reached a fever pitch in February, when Kushner’s interim security clearance was temporarily downgraded as part of an overhaul of the approval process that Kelly ordered.

“Kelly was the last one they wanted out,” said a former White House official, who worked with Trump and Kushner during the 2016 campaign. “Now it’s not just the president who needs to sign off on” his next chief of staff, the official added, “It’s Jared and Ivanka. They have a big voice.”

The duo nearly orchestrated the transition they wanted: the installation of Nick Ayers, chief of staff to Vice President Mike Pence, as Kelly’s successor. A second former White House official said Kushner and Ayers bonded over mutual frustration with what they considered Kelly’s lack of political shrewdness and agreed that Trump’s next chief of staff needs sharper Washington instincts.

“They were both looking for a course correction — someone who understands the political side of things,” the official said. 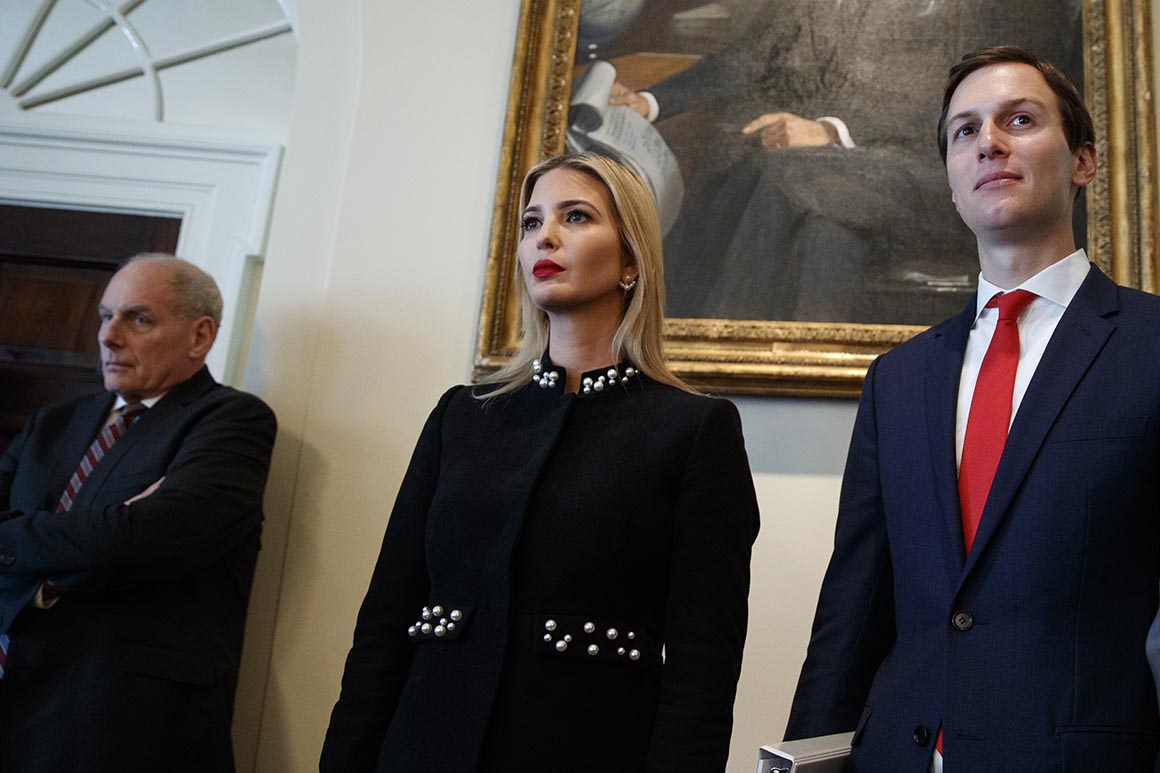 But that plan imploded over the weekend when Ayers, a 36-year-old father of young triplets, refused to agree to a two-year term and backed out of becoming chief of staff, citing his family as a reason. His surprise decision landed the Trump family “back at square one,” according to a third former White House official.

Now they are weighing which of the candidates in whom Trump is interested meet their standards. White House aides and people close to the president are already betting that several candidates will fall out of contention in the coming days because of their troubled or insufficient relationships with Kushner and Ivanka Trump.

That category does not include Bossie, the former campaign aide and longtime conservative activist, who has protected his own reputation among the president’s aides and advisers, but whose friendship with ex-Trump campaign manager Corey Lewandowski is unsettling for many.

“Bossie would have a pretty good chance of getting the job, if not for them,” a source close to the White House said Tuesday, hours after Bossie appeared on “Fox & Friends” in what some viewed as a kind of audition for the role. (Trump is a well-known viewer of the show.)

“I’ve certainly known the president a long, long time — long before he was a candidate,” Bossie said. “I do feel I understand the movement that elected him…. I understand his priorities.” When asked, Bossie acknowledged that he and Lewandowski will be having lunch with Trump on Friday.

Some sources close to the White House say Bossie considers it more likely that he can land a deputy job under Meadows should the conservative Freedom Caucus leader win the job.

One possible factor in Meadows’ favor: He recently defended Ivanka Trump’s use of a personal email account for official White House business, tweeting that “the Hillary Clinton email scandal isn’t even close to the Ivanka email issue.”

During a rare interview on Monday night, Kushner revealed little about the chief of staff search to Fox News host and Trump friend Sean Hannity. He said his father-in-law would “make the right choice for chief of staff when he’s ready,” adding that Trump would “choose somebody he’s got great chemistry with, [a] great relationship with,” and who can aid his 2020 reelection bid.

But Kushner and Ivanka Trump have not always had a Midas touch in their personnel advice.

In 2016, Kushner helped persuade his father-in-law to hire a seasoned political operative to help round up delegates at the Republican National Convention.

That operative was Paul Manafort, who went on to become Trump’s campaign chairman before emerging as a central figure in special counsel Robert Mueller’s investigation into Russian election meddling. A Virginia jury found Manafort guilty this summer on eight counts of bank and tax fraud.

The couple also played a role in bringing Michael Flynn to the White House as national security adviser. Flynn was fired a month into the Trump administration after misleading Pence about his contacts with Russian officials. He has since pleaded guilty to lying to the FBI and is now a cooperating witness in Mueller’s probe.

And the pair also had a hand in bringing on Anthony Scaramucci as White House communications director — a position he held for 10 days before a spectacular flame-out.

Kushner and Ivanka Trump have installed several top aides who have proved reliable operators — including Powell; longtime pals Reed and Maggie Cordish, who led separate White House efforts on innovation and tax reform prior to leaving this year; and Chris Liddell, who worked beside Kushner in the White House Office of American Innovation before Kelly promoted him to deputy chief of staff for policy.

A spokesperson for Kushner and Trump did not respond to a request for comment.

The search for Trump’s third chief of staff comes as Kushner and Ivanka prepare to dig in for a brutal 2020 election cycle in which the president is expected to face a more challenging electoral map, plus a steady stream of investigations into his administration and the conclusion of Mueller’s investigation.

“As corny as it sounds, the biggest thing the president needs right now is a friend — someone who gets along with him and his family and can be a comfort to them,” said a former senior White House official. “That’s the most important attribute a chief of staff can have, and that’s what [Trump] and his family are looking for.”

Source: https://www.politico.com/story/2018/12/12/trump-white-house-chief-of-staff-search-ivanka-jared-1059163
Droolin’ Dog sniffed out this story and shared it with you.
The Article Was Written/Published By: Gabby Orr

For sale: Conventional large home with an 1800s western ghost town in the backyard

This fairly conventional log home in Woodinville, Washington—just 30 minutes from Seattle—is for sale for $1.8 million. It’s a three bedroom and four bath with a creek on the property and, um, an “authentic 1800s western town, originally the town of Silvana, which can be used for wine tasting, events, artist studio, work or play... [...]

The Punk Legacy of Frontier Records

Promotiong Rocky 3, Mr. T made an appearance on Late Nite with David Letterman. Mildly threatening and 100% awesome, Mr. T was the hero the 80s needed. Source: https://boingboing.net/2021/07/27/mr-ts-1982-appearance-on-late-nite-with-david-letterman-is-pure-gold.html?utm_source=rss&utm_medium=rss&utm_campaign=mr-ts-1982-appearance-on-late-nite-with-david-letterman-is-pure-gold Indie Brew found this story and shared it with you. The Article Was Written/Published By: Jason Weisbergerv [...]

The first Ghostbusters came out almost 40 years ago, which is about how long it feels since word first came out about Ghostbusters: Afterlife. In reality, it’s only been about two and a half years since Jason Reitman, son of original director Ivan Reitman, revealed was returning to the world of Slimer, proton packs,… Read... [...]

Newport Folk 2021 Was A Warm, Quiet Welcome Back To Festival Season

It still feels surreal to say — or, that with the Delta variant going around, we’re jinxing it by even acknowledging it — but in the next few months, festivals are supposed to be back in a big way. It’s one thing to get back to your first show, but festivals are a whole different beast, the... [...]