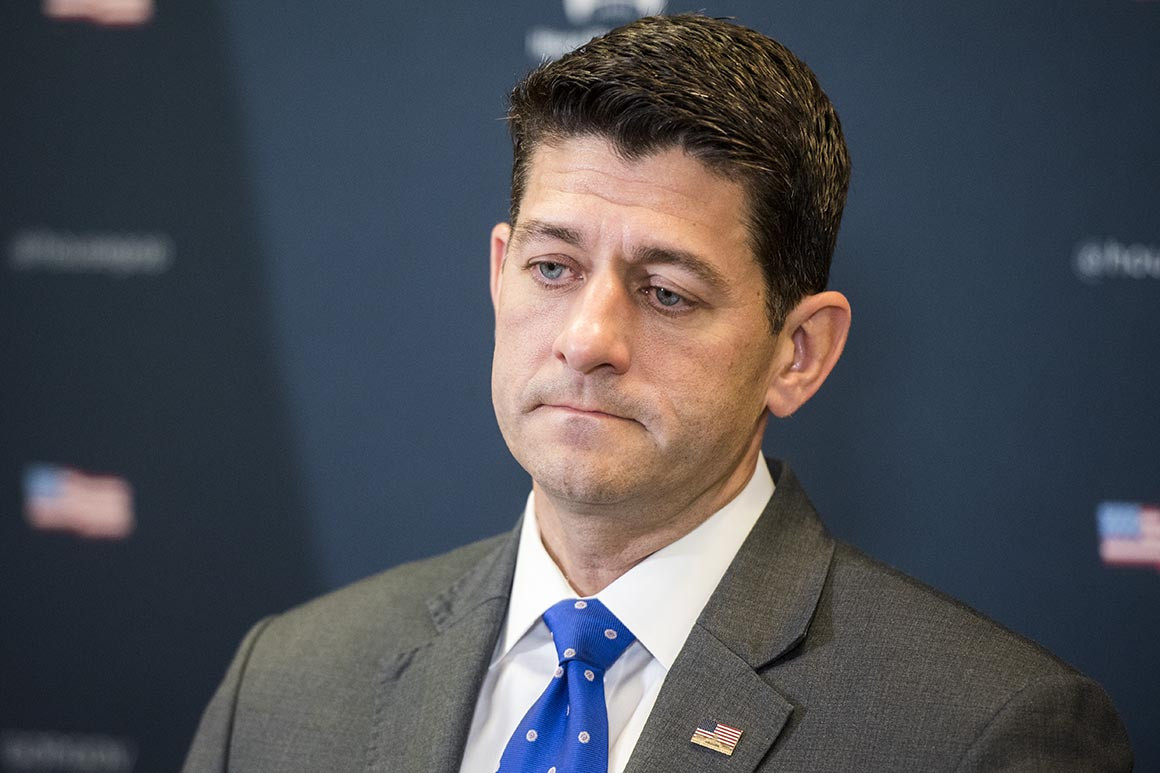 House Speaker Paul Ryan is touting the bipartisan farm bill unveiled this week as a win for Republicans by claiming it strengthens work requirements for food stamp recipients — something Ryan has long sought.

There is just one catch: It does no such thing.

The farm bill is usually a major bipartisan effort that unites urban and rural lawmakers over food stamps and farm subsidies. But in recent years, it has become an ideological platform for conservatives to try to slash the Supplemental Nutrition Assistance Program. Conservatives have lost the battle for a second time since 2014.

The compromise bill released by House and Senate agriculture leaders late Monday is stripped of every controversial proposal the House GOP wanted on food stamps. The most significant concession was on an effort to impose stricter work requirements on millions of able-bodied adults who receive benefits.

The walk-back has upset conservatives, but it was considered crucial for getting a final bill passed by the Senate, where clearing a 60-vote threshold requires some Democrats to vote in favor of the bill.

Indeed, the Senate cleared the compromise bill easily Tuesday afternoon in an 87-13 vote — the biggest vote in favor of a farm bill in the Senate since the Great Depression, lawmakers said. The House is expected to take up the bill Wednesday or Thursday.

Republicans on Capitol Hill are adopting different messages as they try to tout wins in the final deal, which reauthorizes SNAP, farm subsidies, conservation and rural development programs, and is expected to cost $867 billion over a decade.

Making sweeping changes to SNAP, which at $70 billion a year accounts for more than three-quarters of farm bill spending, offered Ryan a last-ditch chance to achieve a small slice of his welfare overhaul agenda.

“This bill strengthens work requirements and boosts work supports so that more people are spurred toward opportunities,” Ryan said during a weekly Republican leadership press conference on Tuesday, pointing to the fact that the nation has millions of open jobs and not enough workers to fill them.

Under the House bill, new work requirements and tighter eligibility rules would have led to about 1.5 million people dropping from the program, the Congressional Budget Office estimated.

The Trump administration is acknowledging that the final compromise falls far short of what the GOP had hoped for. Agriculture Secretary Sonny Perdue tweeted on Tuesday that he “would like more on forest management & SNAP work requirements, but farmers need this bill as they make decisions about next season.”

The final deal does make some changes to SNAP, a program that helps nearly 40 million low-income Americans buy groceries each month, but the changes are minor compared with what House Republicans had sought.

The final deal doesn’t strengthen work requirements or change eligibility rules, but it does include a slight increase in funding for SNAP job-training programs. The final deal would take the relatively small $90 million program to $103.9 million in annual funding — a long way from the House plan to invest $1 billion per year.

The legislation would tighten up how the program is administered at the state level to cut down on inaccurate payments. It would also mandate that states give more support to SNAP recipients in work-training programs.

Asked about Ryan’s repeated claim about work requirements, a spokesperson for Ryan touted a particular provision in the final deal that reins in exemptions states can seek from SNAP work requirements.

“The farm bill tightens those existing exemptions and deploys a number of policies to ensure the existing requirements are being enforced,” the spokesperson said.

The final bill would slightly tweak how exemptions work, but the change is so minimal it doesn’t register as saving any money, according to the CBO.

Conservatives have already begun complaining about the farm bill, arguing that Republicans were steamrolled.

In June, Democrats unanimously opposed the House bill over its changes to SNAP, helping to defeat the bill amid a Freedom Caucus revolt over an unrelated immigration dispute. On second try, the bill passed by just two votes with the help of several conservatives.

This time around, Ryan doesn’t need the Freedom Caucus to get in line because Democrats are expected to support the bill in droves. The conference report could end up passing with more Democrats than Republicans supporting it — an unusual violation of the so-called Hastert Rule, an unwritten GOP leadership principle that speakers only bring up bills that have majority Republican support.

“The Republicans have accomplished what I’ve not been able to do, and that is to make me a hero among the Democrats, because I stared [Republicans] down on SNAP,” House Agriculture ranking member Collin Peterson (D-Minn.) told reporters last week. “I go into the caucus and I get a standing ovation.”

Peterson believes the vast majority of Democrats in the House will vote for the farm bill this week.

Behind the scenes, Perdue is trying to shore up Republican support for the bill by lobbying conservatives who are disappointed the legislation doesn’t impose stricter work requirements.

Perdue called into the weekly GOP conference meeting on Tuesday morning and has been making targeted pitches to influential members such as Republican Study Commission Chairman Mark Walker (R-N.C.).

Walker told POLITICO on Monday, before the compromise text was released, that Perdue mentioned his ability to make “regulatory fixes” to the food-stamp program.

USDA is expected to release soon a proposed rule aimed at limiting states’ ability to obtain waivers from work requirements for SNAP recipients who are able-bodied adults who don’t have children or other dependents.

The farm bill compromise does not include language from the Senate that tried to block the Trump administration from pursuing rulemaking on waivers — an omission that conservatives are touting as a win because it allows USDA to crack down without congressional approval.

President Donald Trump has repeatedly called on Congress to impose stricter “work rules,” although he’s always stopped short of threatening to veto any deal that doesn’t include them. The president is especially sensitive to the concerns of farmers, many of whom voted for Trump in 2016 and are now being hit with retaliatory tariffs as a result of the president’s trade tactics.

In remarks on Tuesday, Trump, sitting beside Senate Minority Leader Chuck Schumer, the likely incoming House Speaker Nancy Pelosi and Vice President Mike Pence, said that “the farm bill is moving along nicely” and that “we think the farm bill is in pretty good shape.”

The president didn’t mention if he was disappointed about the lack of stricter work requirements.

House Agriculture Chairman Mike Conaway (R-Texas) described the changes to SNAP as improvements to “program integrity” in a promotional video released Tuesday — a nod to various administrative improvements in the bill.

As he sells the bill to his colleagues, Conaway is primarily focused on how passing the farm bill will help the agriculture sector, which has been burning through capital because of low commodity prices over the last five years.

Conaway cited the commodity section of the compromise farm bill, which would increase support payments to corn, soybean, wheat, cotton and other row crop farmers by an estimated $1 billion over a decade, as a victory lawmakers “can lay claim to.”

While the House Republican agenda on SNAP attracted the most attention, boosting the farm safety net was also a top priority of Conaway during the negotiations after the Senate version had included more modest changes.

In his weekly press conference Tuesday, Ryan, who’s long touted welfare reform as one of his top priorities, mostly talked about SNAP. The speaker mentioned farmers only in passing from the podium.

“This farm bill delivers on the certainty and support that our farmers need,” he said.

Source: https://www.politico.com/story/2018/12/11/paul-ryan-snap-food-stamps-welfare-congress-1023334
Droolin’ Dog sniffed out this story and shared it with you.
The Article Was Written/Published By: lcrampton@politico.com (Liz Crampton)