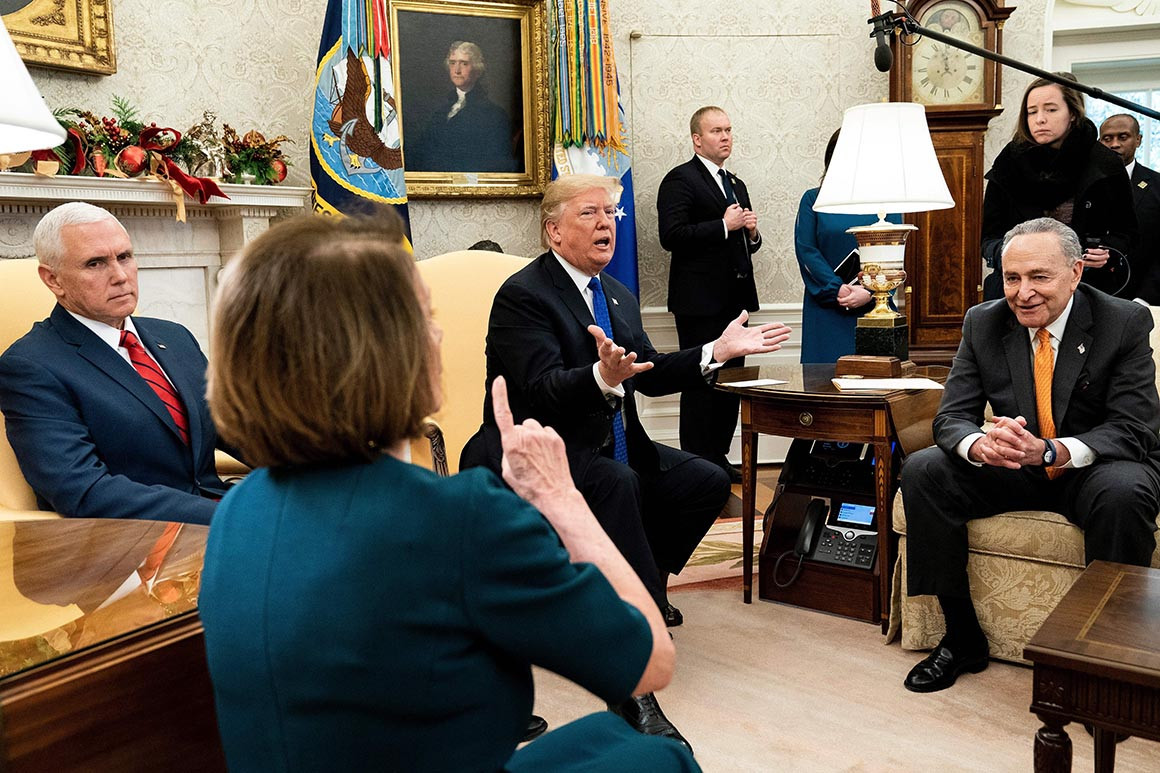 Her assessment, it turned out, was an understatement.

Over the course of 17 awkward and tense minutes in the Oval Office on Tuesday, President Donald Trump and his Democratic adversaries, Pelosi, the expected incoming House Speaker, and Chuck Schumer, the Senate Minority Leader, clashed in spectacular fashion, with the cameras rolling and shocked reporters watching.

In the end, Trump handed Democrats what they believe to be a massive gift: a direct and unqualified admission — on live TV — that he will be responsible for a government shutdown.

“If we don’t get what we want one way or the other … I will shutdown the government,” Trump said, adding that he would be “proud” to induce a shutdown over his push for border wall funding.

Tuesday’s meeting was supposed to be closed to the press, but Trump, as he has done many times before, welcomed in reporters in a bid to shift public opinion in his favor, betting that he could make Schumer and Pelosi look weak on border security.

But instead of sitting quietly while Trump filleted them, Pelosi and Schumer spoke up again and again.

“It’s called funding the government, Mr. President,” Schumer jabbed at the top of the meeting when Trump began talking about the importance of funding his border wall.

Pelosi, whose rise to the speakership is facing challenges from within the Democratic caucus, added later: “I think the American people recognize that we must keep government open.”

The spat spoke volumes about the shifting power dynamics in Washington that will be ushered in when Democrats take over the House next year.

All three leaders — Trump, Pelosi and Schumer — looked uncomfortable at times during the exchange. Schumer and Pelosi frequently looked straight ahead, not making eye contact with the president as they disputed him. Vice President Mike Pence, on the other hand, didn’t speak at all.

As the meeting devolved into a heated argument over whether there are enough votes in the House to fund Trump’s wall, Pelosi urged the president to remove reporters from the room.

“I don’t think we should have a debate in front of the press on this,” she said.

Trump ignored the request and the argument barreled on, insisting that he could easily get the necessary votes in the House and blaming Senate Democrats for holding things up.

Then Schumer stepped in, noting that The Washington Post has granted Trump “a whole lot of Pinocchios” for distorting facts about how much of the wall had already been built. “You just say, ‘My way or we’ll shut down the government,’” Schumer said.

“If it’s not good border security, I won’t take it,” Trump shot back.

As the heated exchange continued, Pelosi and Schumer again called for an end to the spectacle.

But the scene was far from over. As it continued, Schumer and Pelosi at times looked shocked by what was unfolding, even as they continued pushing back on the president.

“When the president brags that he won North Dakota and Indiana, he’s in real trouble,” Schumer quipped at one point, to which Trump responded that he did in fact win those states.

Responding to Pelosi’s calls to end the open-press portion of the meeting, Trump hit back with a thinly veiled swipe at the leadership tumult within her caucus.

“I also know that Nancy is in a situation where it’s not easy for her to talk right now and I understand that,” Trump said.

That set Pelosi off.

“Mr. President, please don’t characterize what I bring to this meeting as the leader of the house Democrats,” she said.

Pelosi explained that she didn’t want to have to publicly dispute Trump’s many questionable assertions about the border wall. “We have to have an evidence-based conversation,” she said, adding, “Let us have a conversation where we don’t have to contradict in public the statistics that you put forth.”

“I did not want to, in front of those people, say, ‘You don’t know what you are talking about,'” she told reporters after leaving the meeting.

But Trump didn’t seem to care, bulldozing ahead every time Pelosi or Schumer tried to end the verbal skirmish. The president accused Schumer for the brief government shutdowns earlier this year. Schumer responded that Trump has repeatedly called for a government shutdown. “I don’t want to do what you did. Twenty times you … called for it,” Schumer said.

By this time, Trump had had enough. But before he ended the meeting, he gave Democrats exactly what they wanted — a sound bite that they are certain to replay every time a government funding deadline nears.

After the meeting, Schumer and Pelosi, standing on the White House driveway, were quick to pounce on his comments, with Pelosi making sure to brand any government closure the “Trump shutdown.”

“He has admitted in this meeting that he will take responsibility,” Pelosi said. “The Trump shutdown is something that can be avoided and that the American people do not need at this time of economic uncertainty, and people losing jobs and the market in a mood and the rest. It is a luxury — the Trump shutdown is a luxury that the American people cannot afford.”

After the meeting, White House press secretary Sarah Huckabee Sanders characterized the riveting spat as a “constructive dialogue” between the three leader, noting in an understatement: “Major disagreement remains on the issue of border security and transparency.”

Source: https://www.politico.com/story/2018/12/11/trump-pelosi-schumer-meeting-oval-1056862
Droolin’ Dog sniffed out this story and shared it with you.
The Article Was Written/Published By: arestuccia@politico.com (Andrew Restuccia)