Defending the president during a talk hosted by POLITICO, Sanders said on Tuesday that male reporters had been equally targeted by Trump’s vitriol and derision during press briefings.

“The president’s had an equal number of contentious conversations with your male colleagues,” Sanders told POLITICO’s Eliana Johnson at the 6th annual Women Rule Summit. “Women wanted to be treated equally, and we have a president that certainly does that.”

Trump has personally mocked many reporters in the two years of his presidency. During a Rose Garden briefing in October, he told ABC’s Cecilia Vega: “I know you’re not thinking. You never do.” He has also attacked male reporters, getting into an infamous tussle with CNN’s Jim Acosta last month that led to Acosta’s White House access being temporarily denied.

But the president seems to have targeted female reporters in particular, and his comments demeaning or otherwise belittling women journalists go back nearly two years. Early in his presidency, Trump commented on an Irish reporter’s appearances, calling her over to his desk in an uncomfortable exchange that ricocheted on social media.

In an encounter with reporters days after the news conference where he sparred with Acosta, the president insulted April Ryan. “You talk about somebody that’s a loser,” Trump said of Ryan, a White House correspondent for American Urban Radio Networks who is African-American. “She doesn’t know what the hell she’s doing.”

Also last month, the president lashed out at Yamiche Alcindor, a reporter of color with the “PBS NewsHour,” when she asked whether he worried that his rhetoric was emboldening white nationalists. “That is such a racist question,” Trump said, adding that the question “is so insulting to me. It’s a very terrible thing you said.”

Of course, Trump’s attitude and behavior around women predated his presidency. During the 2016 campaign, he infamously bragged about sexually assaulting women. 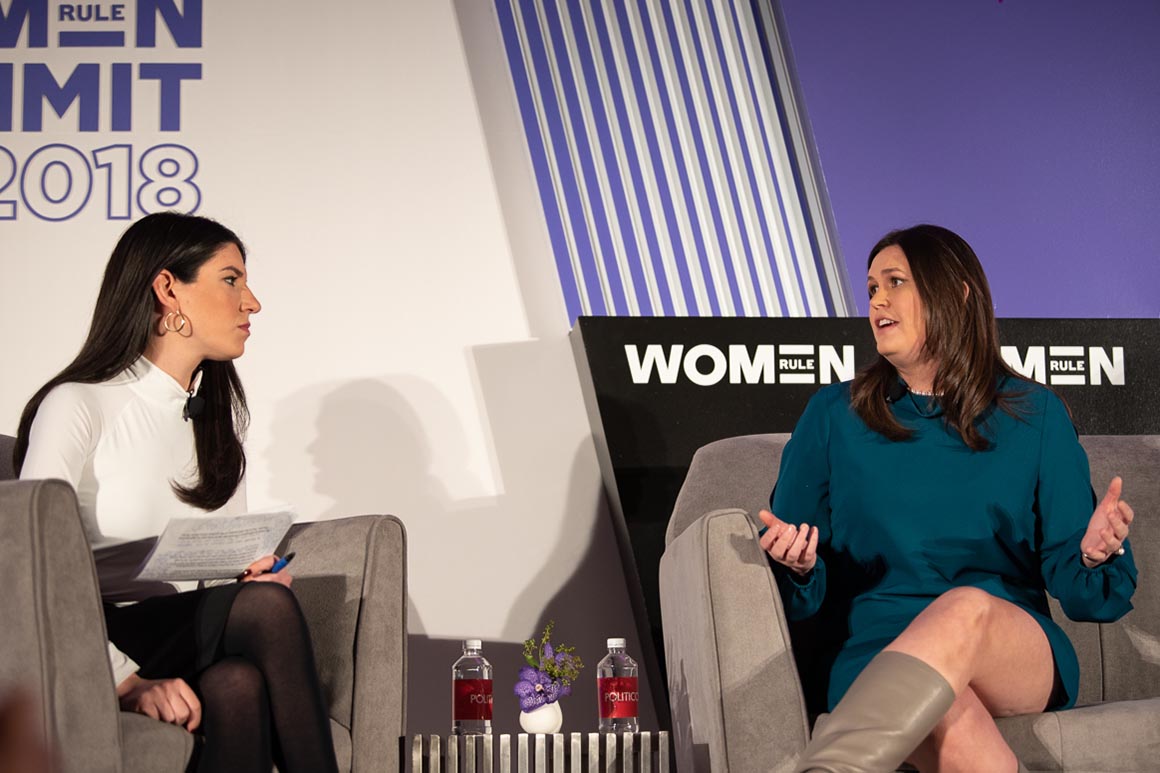 Sanders, however, rebuffed the idea that the president’s tussles with the press are at all based on gender.

When asked whether Trump’s behavior was appropriate toward reporters in general, Sanders offered the “both sides” argument that the White House often uses to defend the president. Though Sanders said she would prefer that both the press and president turn down the heat in their exchanges, she said the American people knew what they were getting when they elected Trump.

“I don’t always find the behavior of the press to be appropriate, either,” Sanders said. “I think that the president is somebody who’s a fighter. When he gets hit, he always hits back.”

Later during the conversation, Sanders denied rumors that she would be leaving the administration soon.

She also discussed the challenges of raising young children while serving as the first White House Press Secretary who is also a mother. Despite the vitriol and headlines that often come out of her briefings, she said, her children — aged 6, 5 and 3 — find her job boring.

“My kids are very unimpressed by most of what I do,” Sanders said. “I think they think everybody’s parents are on TV.”

Source: https://www.politico.com/story/2018/12/11/sarah-huckabee-sanders-trump-female-journalists-1058431
Droolin’ Dog sniffed out this story and shared it with you.
The Article Was Written/Published By: Matthew Choi