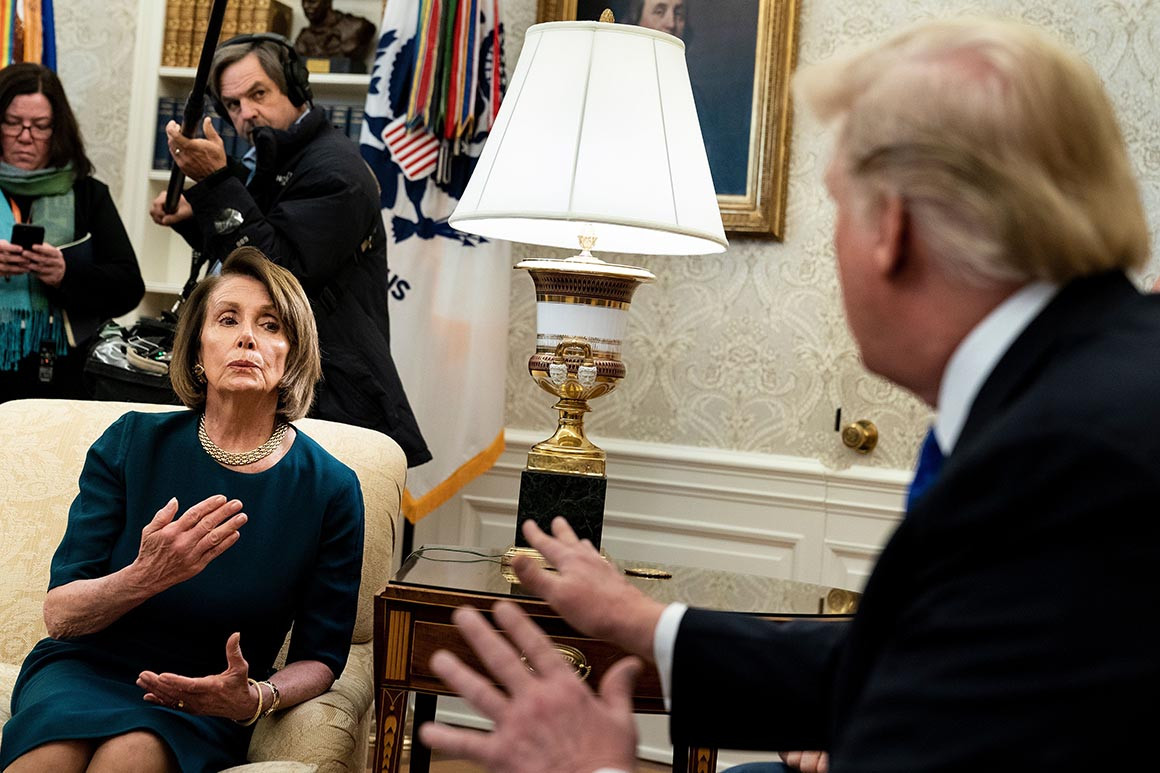 Nancy Pelosi was on fire.

Minutes after a very public showdown with Donald Trump over his border wall with Mexico, the California Democrat returned to the Capitol and railed against the president in a private meeting with House Democrats.

Trump “must have said the word ‘wall’ 30 times,” the House minority leader said, according to multiple sources in the room.

“I was trying to be the mom,” she added, but “it goes to show you: you get into a tinkle contest with a skunk, you get tinkle all over you.”

And then, Pelosi went for the most sensitive part of Trump’s ego.

“It’s like a manhood thing with him — as if manhood can be associated with him,” she deadpanned. “This wall thing.”

Congressional Democrats are feeling smug — and actually a little excited — for the looming shutdown fight with the president after Tuesday’s Oval Office meeting.

The president may have opened up the entire negotiation session to the public to throw Pelosi and Senate Minority Leader Chuck Schumer off their game. But in the end, Democrats feel confident that their leaders came out ahead.

Trump, Democrats argue, fell into a trap the minute he took ownership of what Pelosi has dubbed “the Trump shutdown.” Absent a bipartisan agreement on Trump’s border wall, about a quarter of the government will run out of money on Dec. 21.

Democrats say their leaders looks like the only reasonable adults at the table: they were the only side arguing that a government shutdown is a bad thing.

The public sniping between both sides is a sign of just how ugly the next two years will be once Democrats take the House.

And if House Democrats wanted to see how the next potential speaker would match up against Trump, they got a pretty good glimpse of the future Tuesday.

Indeed, the episode is likely to help Pelosi in her bid to round up the votes to be speaker. The women who’s led the caucus for 15 years is still working behind the scenes to secure the 218 votes needed to retake the gavel.

It was in that vein that Pelosi harped on Trump as she returned to the Hill to join her colleagues at a Democratic Steering Committee meeting. She told the room the party was well positioned to fight in this shutdown showdown — particularly after Trump’s comments.

“The press is all there! Chuck is really shouting out. I was trying to be the mom. I can’t explain it to you. It was so wild,” she said, later adding: “But the fact is we did get him to say, to fully own that the shutdown was his. That was an accomplishment.”

At one point, after reporters and TV cameras left the Oval Office, Trump told Pelosi and Schumer that the new trade agreement he recently struck with Canada and Mexico was going to pay for the wall, Pelosi told lawmakers.

On the campaign trail, the president had vowed that Mexico would pay for any southern barrier — not the United States. Pelosi and Schumer reminded him several times during the rare public meeting Tuesday that he failed to keep this vow.

In private, however, Trump suggested both U.S. neighbors would pay for the construction with the new NAFTA agreement.

The entire thing baffled Pelosi. It’s a “cultural phenomenon,” Pelosi told her colleagues, that “the fate of our country [is] in the hands of this person.”

Source: https://www.politico.com/story/2018/12/11/pelosi-disses-trumps-manhood-white-house-meeting-1057607
Droolin’ Dog sniffed out this story and shared it with you.
The Article Was Written/Published By: rbade@politico.com (Rachael Bade)