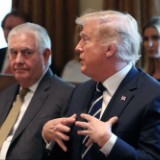 Former Secretary of State Rex Tillerson was presented with an enviable opportunity to publicly drag his former boss, President Trump, during a sit-down with CBS News reporter Bob Schieffer in Houston last night. For the most part, Tillerson restrained himself, limiting his criticism to things we already know, but which are still worth repeating: Namely, that Trump doesn’t care to…

Source: https://www.spin.com/2018/12/donald-trump-and-rex-tillerson-each-swear-the-other-is-the-dumbass/
Droolin’ Dog sniffed out this story and shared it with you.
The Article Was Written/Published By: Maggie Serota