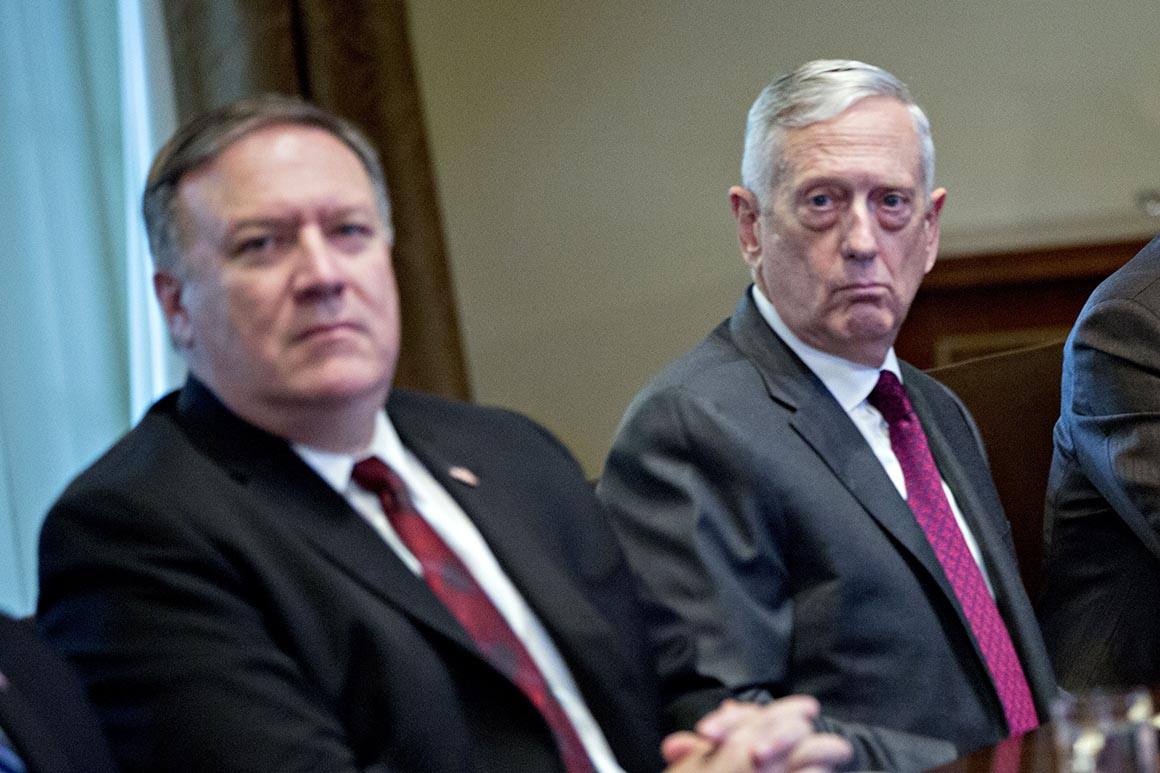 Murphy, who sits on the Foreign Relations Committee but was kept out of Tuesday’s classified briefing with CIA Director Gina Haspel, argued senators coming out of that briefing with Haspel undercut the administration’s claim that restricting access to the intelligence was necessary.

In an interview on MSNBC’s “Morning Joe” on Wednesday, the Connecticut Democrat said that Trump’s “maybe he did, maybe he didn’t” exoneration of Salman, referred to often as MBS, in light of U.S. intelligence reportedly determining with “high confidence” that the crown prince ordered the killing put Mattis and Pompeo in a squeeze when addressing senators last week.

“I think the secretary of defense and secretary of state are in a bad spot because the president has given this bear hug to MBS and to the entire Saudi regime so they are bound to carry out his bizarre policy,” he said. “But at the same time, it’s sort of hard to call this a cover up given the fact that everybody in that briefing last week knew that Pompeo and Mattis were misleading us, knew there was no way this murder happened without the consent and direction of MBS.”

Last week, Pompeo told reporters that there was no definitive proof that the crown prince was responsible for Khashoggi’s murder, while Mattis said that there was “no smoking gun.”

Sen. Lindsey Graham (R-S.C.), a close ally of Trump, refuted Mattis’ words after Tuesday’s briefing. Instead, he declared, there was a “smoking saw” implicating the crown prince, a reference to reports that Khashoggi was dismembered with a bone saw following his death in the Saudi consulate in Turkey.

Meanwhile, retiring Sen. Bob Corker (R-Tenn.), the chairman of the Foreign Relations Committee, said that if the crown prince was put on trial he’d be convicted by a jury in “30 minutes.”

The Trump administration’s response to Khashoggi’s murder has incensed lawmakers, who have pushed for more consequences aside from Trump’s existing sanctions on Saudi officials determined to be involved in the plot.

Murphy on Wednesday gave Mattis and Pompeo “a little bit of credit” for their delicate dance around Trump’s statements on the matter.

“They were very careful in the words they used in that hearing. They didn’t say that Mohammed bin Salman had nothing to do with it. They said there was no smoking gun. But in the meeting, they clearly left the impression by using that phrase that they did not have evidence from the intelligence services that proved that he did it,” he said. “Again, this is a elite unit that he formed that has been at his direction and open reporting now tells us that he was talking to them all throughout the day. I think they were very careful in the words that they chose because they knew what the president said only a few days before.”

Source: https://www.politico.com/story/2018/12/05/mattis-pompeo-khashoggi-briefing-murphy-1045365
Droolin’ Dog sniffed out this story and shared it with you.
The Article Was Written/Published By: coprysko@politico.com (Caitlin Oprysko)