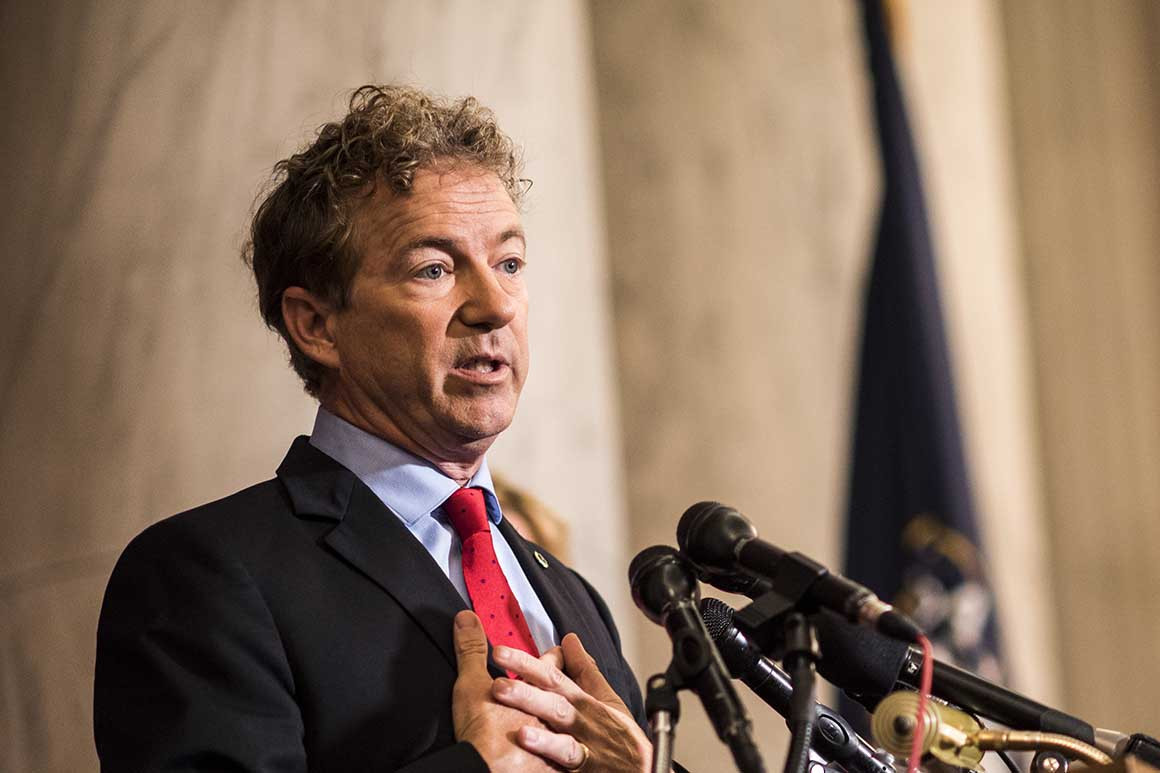 Sen. Rand Paul is infuriating Republicans and Democrats alike by blocking a pair of Israel-related bills, including one authorizing tens of billions of dollars in military aid for the country.

Some advocacy groups are so mad at Paul they’re running ads against the Kentucky Republican, who insists that his long-term goal is actually to help Israel.

The dust-up is the latest example of how Paul is willing to throw a wrench into routine legislation to uphold his libertarian instincts, which make him skeptical of foreign aid. It also could hurt his already-testy ties to President Donald Trump, who sees the U.S.-Israel relationship as near-sacrosanct.

The main bill Paul is blocking puts into law an agreement reached under former President Barack Obama that gives Israel $38 billion in military assistance over 10 years. The measure has broad bipartisan support in Congress. Various versions of the bill have easily passed the Senate and the House in recent months, but the Senate still needs to pass a final version.

Using his Senate privileges, Paul placed a hold on the bill on Oct. 11, surprising other lawmakers, according to Hill staffers.

“At a time when Israel faces unprecedented threats, blocking a bipartisan bill that empowers the U.S. to stand with Israel is inexplicable,” said Sen. Marco Rubio, the Florida Republican lead on the measure. The Democratic lead on the bill, Sen. Chris Coons of Delaware, added that Paul’s “stated reasons for opposing the bill neither make sense nor support America’s strategic interests.”

Rubio’s office repeatedly reached out to Paul’s office over the next several weeks, asking for an explanation of Paul’s objections in hopes of finding a resolution, according to people familiar with the negotiations. Paul’s office offered little by way of answers, they said. (A Paul spokesman denied that, saying “our office has always been responsive.”)

On Monday, Paul’s office told Rubio’s office that Paul would lift the hold if lawmakers could find ways to offset at least $3 billion in the pledged money, including by possibly rescinding some funding for the U.S. Agency for International Development.

In various statements to the press, Paul has said he supports Israel, but that in the long run the country should become self-sufficient. He adds that he’d prefer to fund Israel by cutting assistance to less-deserving countries and entities, such as the Palestinian Authority and Pakistan.

The senator plans to introduce a measure next week that adjusts foreign aid funding to his preference.

“If we are going to send aid to Israel it should be limited in time and scope so we aren’t doing it forever, and it should be paid for by cutting the aid to people who hate Israel and America,” Paul said in a statement to POLITICO.

The White House did not respond to a request for comment. Pro-Israel advocates, meanwhile, are not sold on Paul’s argument.

Some worry that completely de-funding the Palestinian Authority – including its security services – could further de-stabilize an already tense situation on the ground. There’s also a fear that if the U.S. cuts funds to other countries, that could breed more international resentment against Israel.

The Trump administration already has taken separate moves to halt significant amounts of financial aid to Pakistan and the Palestinians, but Paul appears to want the aid stoppage to be formally put into law.

Just this week, Paul placed a hold on a bill that is designed to counter the “boycott, divestment and sanctions” movement, congressional staffers confirmed. That movement urges companies and countries to penalize Israel through boycotts and other means over its treatment of the Palestinians. Rubio is also a lead sponsor of that legislation, which has plenty of bipartisan backing.

The federal bill has a number of elements, including essentially condoning state and local government laws that penalize people and companies who back isolating Israel over the Palestinian issue.

Paul’s office said he has concerns that the anti-“boycott” bill could infringe on Americans’ First Amendment rights — a concern other opponents of such measures share. In any case, his hold has further upset pro-Israel groups already steamed about his efforts to stop the aid package.

One such organization, Christians United for Israel, has spent $100,000 on a digital and cable news ad buy across Kentucky to pressure Paul to allow the military aid bill’s passage. That’s on top of its purchase of print advertisements in major Kentucky newspapers.

“As rockets rain down on our ally Israel, will Rand Paul stand with Israel, or will he stand in the way?” one version of the digital ad asks.

“Sen. Paul’s actions are contrary to the values of the voters he is supposed to be representing in Washington,” Parker said in a statement.

Reports that Paul was trying to block the anti-“boycott” legislation even drew chiding from Mark Kirk, the former Illinois Republican senator who was the original author of the measure.

“I encourage the senator to speak with Governor Bevin and Kentucky voters if he doesn’t understand the anti-Semitism behind the BDS movement,” Kirk said in a statement.

The American Israel Public Affairs Committee also has taken out digital ads and is urging its supporters to contact Paul’s office to demand he lift his hold on the military aid bill.

“Given the growing threats to Israel’s security from Iran, Hezbollah and Hamas, it is absolutely critical that Congress complete bipartisan legislation that will provide essential security assistance to America’s closest ally in the region,” AIPAC spokesman Marshall Wittmann said in a statement.

Source: https://www.politico.com/story/2018/11/30/rand-paul-israel-military-aid-congress-senate-1036943
Droolin’ Dog sniffed out this story and shared it with you.
The Article Was Written/Published By: Nahal Toosi

Newport Music Festival began over the weekend in Rhode Island’s picturesque Fort Adams State Park — our own Ryan Leas called it a welcome, understated return to music festivals — and the event is actually continuing through today, with some big names packed into the weekday schedule. One of the biggest is Beck, who performed... [...]