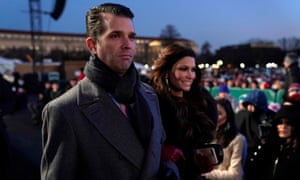 Donald Trump’s eldest son and other associates of the president may be at greater risk of prosecution after Robert Mueller, the special counsel, showed he is willing to criminally charge people for lying to Congress.

Mueller on Thursday obtained a guilty plea from Michael Cohen, one of Trump’s closest advisers for more than a decade, who admitted giving an untrue account to Congress about the Trump Organization’s effort to develop a tower in Moscow during 2016.

Source: https://www.theguardian.com/us-news/2018/nov/30/donald-trump-jr-may-face-legal-peril-after-cohen-admits-lying-to-congress
Droolin’ Dog sniffed out this story and shared it with you.
The Article Was Written/Published By: Jon Swaine in New York