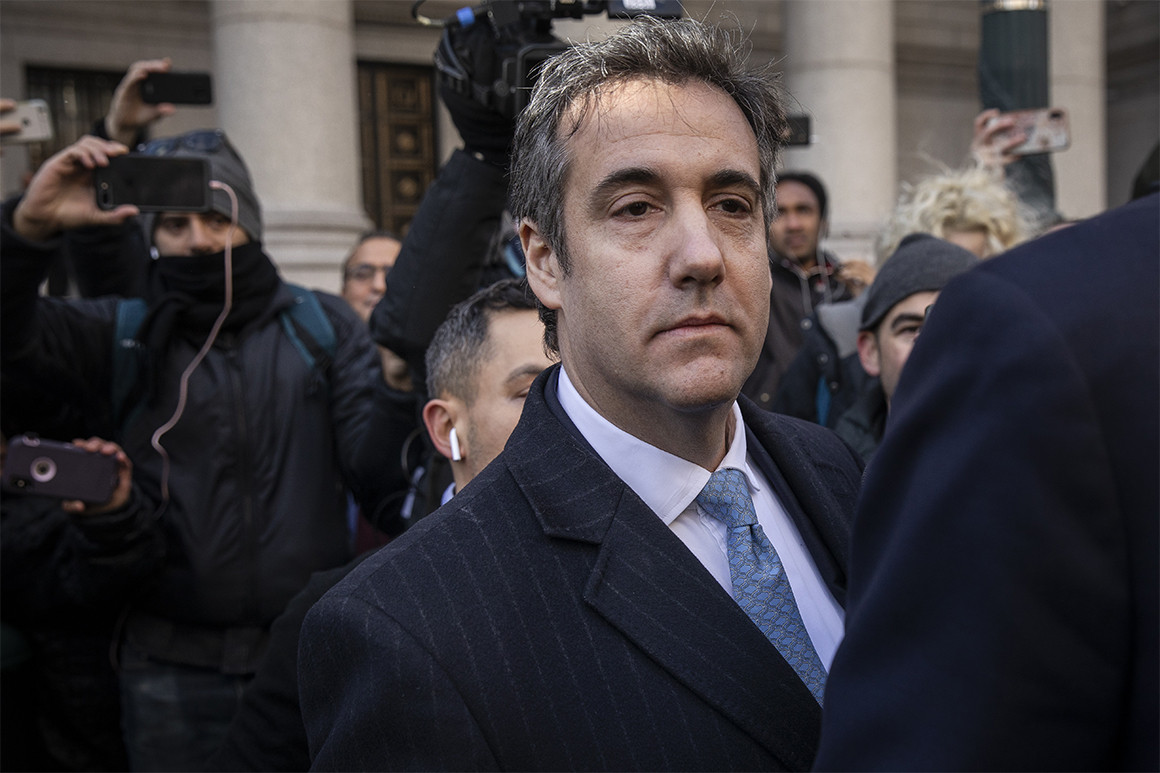 Who is Michael Cohen?

Cohen worked for years as an executive at the Trump Organization and as Trump’s personal lawyer and “fixer.” He considered himself one of Trump’s most loyal aides, telling Vanity Fair last year that he “would take a bullet for the president.” He continued to describe himself as Trump’s “personal attorney” after Trump was elected president and worked as a consultant to companies such as AT&T and Novartis, as well as the law and lobbying firm Squire Patton Boggs.

But Cohen’s relationship with Trump soured this year after The Wall Street Journal reported Cohen had arranged to pay Stephanie Clifford (aka Stormy Daniels) $130,000 shortly before the 2016 election to buy her silence about an alleged affair with Trump, which Trump has denied.

When the FBI raided Cohen’s office and apartment in April, Cohen described the president as “a good man.” But Trump abandoned Cohen after he pleaded guilty in August to breaking campaign finance laws by paying off Clifford and another woman. Cohen told a federal judge that Trump had directed him to make the payments, which he arranged in order to influence the 2016 election. Trump responded by berating Cohen, tweeting, “If anyone is looking for a good lawyer, I would strongly suggest that you don’t retain the services of Michael Cohen!”

Why is Cohen pleading guilty a second time?

Cohen, who’s cooperating with special counsel Robert Mueller, returned to court on Thursday to plead guilty to misleading Congress last year about his role in efforts to build a Trump Tower in Moscow.

Cohen sent a letter to the Senate and House intelligence committees last year claiming that the Trump Organization’s pursuit of the Moscow deal ended in January 2016 and that Trump’s involvement was limited. He also claimed that he never agreed to travel to Russia to work on the deal and “never considered” asking Trump to do so. And he said he didn’t recall any response from Russian government officials to his inquiries about the proposal.

But Mueller stated in a court filing on Thursday that none of those claims were true. Cohen pleaded guilty to misleading Congress to “minimize links between the Moscow Project” and Trump — identified as “Individual 1” in the court filing — and make it seem like the project had ended before the Iowa caucus “in hopes of limiting the ongoing Russia investigations.”

Cohen kept discussing the Moscow project for longer than he’d admitted and asked Trump about the possibility of traveling to Russia “in connection with the Moscow Project.” And Cohen spoke at least once with the personal assistant to Dmitri Peskov, Russian President Vladimir Putin’s spokesman, according to Mueller.

What was Trump’s interest in Russia, anyway?

Felix Sater, a Russian immigrant and a former broker for the Trump Organization, pitched a real estate deal in Russia to Cohen in 2015, arguing that it would help get Trump elected president, according to emails the Trump Organization provided last year to the House Intelligence Committee.

“Buddy our boy can become President of the USA and we can engineer it,” Sater wrote in an email to Cohen dated Nov. 3, 2015. “I will get all of Putins team to buy in on this, I will manage this process.”

While Trump signed a “letter of intent” to pursue the project, Cohen told Congress that it never went anywhere and that he discussed it with Trump only three times. Cohen also suggested at the time that Sater had oversold his connections.

“Over the course of my business dealings with Mr. Sater, he has sometime used colorful language and has been prone to ‘salesmanship,” Cohen said in a statement.

What does Cohen’s guilty plea tell us about Sater?

Sater isn’t named in the court filing made public on Thursday, but he appears to be “Individual 2.”

Contrary to Cohen’s claim that the Trump Organization had abandoned the potential deal by January 2016, Cohen and Sater were still talking about getting Russian government approval for the project “as late as approximately June 2016.” Cohen discussed the project with Trump more than the three times he’d claimed and also briefed Trump family members on the project.

On May 4, 2016, weeks before Trump clinched the Republican nomination, Sater asked Cohen when Trump would be able to come to Russia, presumably to discuss the project. Cohen responded that Trump would do so “once he becomes the nominee after the convention.” The next day, Sater invited Cohen to travel to St. Petersburg in June to attend a forum as a guest of Putin’s spokesman. Cohen agreed to go but later backed out of the trip.

What has Trump said about his business deals in Russia?

Trump has said repeatedly that he has no business ties to Russia. “I HAVE NOTHING TO DO WITH RUSSIA – NO DEALS, NO LOANS, NO NOTHING!” he tweeted days before his inauguration. Trump told reporters on Thursday that he had the opportunity “to possibly do a deal, to build a building of some kind in Moscow” but he decided against it to focus on running for president.

But, he added, “there would be nothing wrong if I did do it.” If he hadn’t won the presidential race, he would have returned to the real estate business. “Why should I lose lots of opportunities?” he said.

Source: https://www.politico.com/story/2018/11/29/michael-cohen-robert-mueller-investigation-1028881
Droolin’ Dog sniffed out this story and shared it with you.
The Article Was Written/Published By: tmeyer@politico.com (Theodoric Meyer)