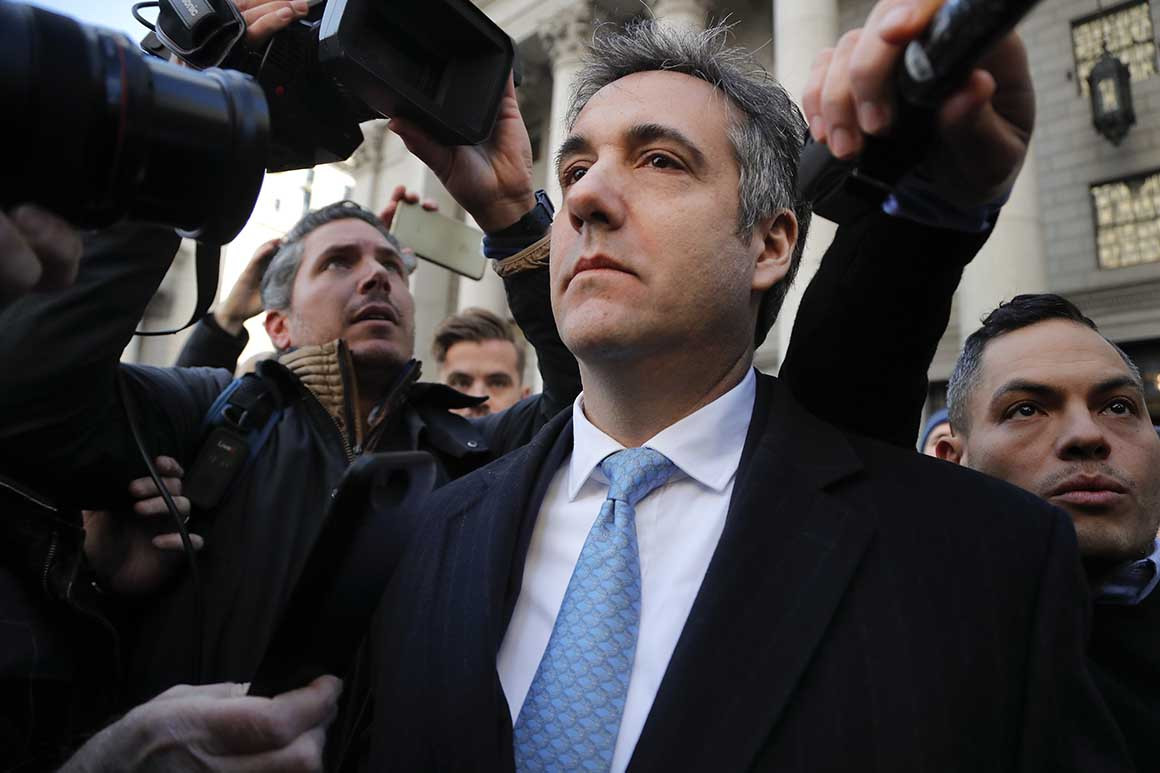 Michael Cohen was once President Donald Trump’s most militant loyalist. Now House Democrats are eyeing him to become their star witness.

Democrats think Cohen could be a linchpin in their upcoming efforts to spotlight Trump’s relationship with Russia and are hoping to call him to testify before the House once they seize control of Congress.

They’re well aware of Cohen’s close connection to the president — and that he’s turned on Trump, making him a potential ally in their quest to uncover and highlight Trump’s alleged dirty laundry.

Even Senate Intelligence Committee Chairman Richard Burr has joined his Democratic counterpart, Sen. Mark Warner, in suggesting Cohen should come back to the Hill — particularly after he pleaded guilty Thursday to lying to lawmakers about Trump’s awareness of the proposed Trump Tower Moscow deal in the heat of the presidential election.

But Cohen was also at the center of the hush payment to adult film star Stormy Daniel and could prove a critical witness to House Democrats in all sorts of inquiries, Democrats say.

“He’s been at the nexus of so many different issues for so long, and given that Mr. Cohen was the president’s confidant and attorney, he knows a lot and he can shed a lot of light,” said Rep. Raja Krishnamoorthi (D-Ill.), a member of the House Oversight Committee, who called Cohen “the perfect witness.” “I think that it will be good to hear him out and figure out what he knows.”

“Obviously you have to be a little bit ginger with anybody who’s been lying for a long time, but… he is clearly going to be a truth-telling refugee in Trump would,” Raskin said. “And he has a lot to say about a lot of different things that are in the preview of the Oversight Committee and the Judiciary Committee, so I would expect that he has something to contribute to the congressional investigations of the lawlessness of the Trump administration.”

A Cohen redux at the Capitol would be a spectacle that could rival the Watergate hearings. The image of Trump’s longtime personal attorney and political fixer describing crimes connected to the president would be an all-consuming Washington event and a chance for the Democratic House majority to flex its newfound investigative powers.

Cohen is at the top of the list of a slew of Trump aides and associates that Democrats intend to haul before congressional committees for investigations they accuse Republicans of neglecting to pursue. The difference is, however, that Cohen appears willing to “sing” as Raskin noted while others have been guarded.

“The noose is closing around the president,” said Rep. Pramila Jayapal (D-Wash.), another member of the House Judiciary Committee who wants to hear from Cohen so long as it doesn’t infringe on special scunsel Robert Mueller’s investigation. “Our job on Judiciary is to get everybody in front of the committee and subpoena people if we have to.”

Democrats say, whatever they end up doing, they will not interfere with Mueller, who secured Cohen’s guilty plea as part of an ongoing investigation of Russian interference in the 2016 presidential election.

But House Democrats also say they intend to revisit lingering mysteries about Trump’s relationship with Russia — and they also want more witnesses to testify in publicly to help provide the public a window into what has been a largely opaque probe.

Thursday’s guilty plea is Cohen’s most recent. He pleaded guilty in August to tax evasion and a campaign finance violation connected to the hush payment to Daniels, who has claimed an affair with Trump, that could also ensnare the president.

In Thursday’s plea, Cohen admitted to lying to Congress when he testified in late 2017 to the House and Senate Intelligence Committees that his efforts to arrange a Trump Tower Moscow deal ended in January 2016, before the presidential primaries. He also claimed Trump had little involvement and that the Kremlin never responded to his entreaties.

But Cohen now says talks continued into June 2016 — shortly after the presidential primaries ended — and that he briefed Trump and the president’s family on his progress. He also acknowledged corresponding with Kremlin officials about the project, which ultimately fell apart as Trump neared the GOP nomination.

Rep. Adam Schiff (D-Calif.) said Democrats will seek Cohen’s cooperation in an investigation into whether “the Russians sought financial leverage of Trump and his associates, or hold any such leverage today.” Schiff is expected to chair the House intelligence Committee in January when Democrats take control of the House.

It’s uncertain whether Cohen’s potential testimony would be delivered publicly. But Democrats say they’re intent on conducting more of their investigative work in public to give Americans a clearer window into the lingering mysteries of the Russia probe.

And demand for Cohen’s testimony may not be limited to the House and Senate Intelligence Committees. Rep. Jerrold Nadler (D-N.Y.), who is expected to become House Judiciary Committee chairman in January, issued a blistering statement noting that Cohen’s guilty plea came with a vow to cooperate with investigators.

“Anyone who still believes that this is a ‘witch hunt’ must now face the reality that the investigation appears to be closing in on the President,” Nadler said.

“We want those transcripts reviewed by special counsel,” Schiff said in an interview. “Other witnesses … that would be brought before our committee would understand that their testimony would be scrutinized and if they perjure themselves there’s a great likelihood they’ll be prosecuted for it.”

A House Intelligence Committee Democratic aide noted that the panels’ Republicans have for months blocked the Democrats’ efforts to share witness interview transcripts with Mueller. They reversed course just weeks before the November elections and the transcripts are now being vetted by the intelligence community for public release.

Schiff says that if they’re not out before Democrats take the House in January, he’ll make sure they’re shared with Mueller as one of his first acts as chairman.

The Senate Intelligence Committee, however, has already sent some of its interview materials to the special counsel— the Senate has voted twice to allow the committee to share records with Mueller. And two individuals who met with Mueller’s team said it appeared the special counsel had some familiarity with their congressional testimony, if not an entire transcript of what they told House and Senate Intelligence Committees.

“I’m quite certain the Mueller investigation had my testimony when I was with them, but I’m not all that concerned about it,” said ex-Trump campaign aide Michael Caputo, who appeared before both panels and later met with federal investigators.

Caputo claimed the special counsel has deliberately made it difficult for Trump associates to avoid discrepancies between what they tell Mueller and their congressional testimony because “the investigation is caught up on people remembering chapter and verse of every email, call, and text they’ve ever sent.”

Attorneys for other witnesses in Mueller’s probe emphasized that false statements to Congress is a rarely prosecuted charge — and an even rarer conviction because it’s difficult to prove that a witness intentionally lied. Though Cohen used the offense as part of a plea deal, it’s unlikely they say to result in a raft of future prosecutions for other Trump aides that Democrats say misled the committee.

Some House Democrats argue that Cohen could aide them in their hunt for critical documents as well — particularly because they expect the White House will refuse to cooperate with at least some congressional subpoenas.

Democrats believe Trump and the White House will stonewall their documents, so they’ll likely be looking for other venues to get their hands on emails or other missives that include evidence about Russia or the Daniels hush payment. That could include Cohen, they say.

“Cohen knows where the documents and evidence are to actually back up his statements or to refute something what the president says, so that’s all the more reason that he should be brought in at some point,” Krishnamoorthi said.

Source: https://www.politico.com/story/2018/11/29/michael-cohen-congress-testimony-trump-mueller-1034365
Droolin’ Dog sniffed out this story and shared it with you.
The Article Was Written/Published By: Gabby Orr